Markets were treated to a kind of miniature “taper tantrum” this week as the minutes of the Federal Reserve’s April 27–28 meeting revealed “a number of participants” were ready to talk about plans for dialing back the Fed’s ongoing asset purchases at upcoming meetings, should the economy continue to make “rapid progress.”

And while many observers might think—correctly, in our view—that discussing the potential to move away from accommodation is little more than stating the obvious, it is at odds with Fed Chair Jerome Powell’s recent comments that the issue isn’t even under discussion at this stage. This, perhaps, was the source of the markets’ consternation.

So with markets already somewhat on edge given ongoing inflation fears, is “taper talk” yet another risk for investors to navigate in the coming months? After all, this week’s Fed developments follow recent moves by the Bank of Canada and the Bank of England to begin the process, in various forms, of paring back their asset purchase programs.

As is typically the case with markets, the larger issue concerns what is priced in, and what is not. It’s difficult to judge what the market consensus might be with respect to expectations for the Fed’s exit, but the New York Fed’s own Survey of Market Participants may give us the closest thing to a base case.

As the chart illustrates, the March survey showed that most respondents expected the Fed’s $240 billion in quarterly Treasury purchases to continue through the end of this year, then fall to $205 billion in the first quarter of 2022, $160 billion in the second, and ultimately decrease to zero by the end of the year. Accordingly, 2023 would remain the first window for the rate hike process to begin.

The base case for the Fed’s exit: Tapering starts early next year, rate hikes in late 2023

Powell has been adamant that markets would receive ample warning of the Fed’s plans. While discussions are likely to pick up at the central bank’s June 15–16 meeting, we don’t expect any formal announcement until later in the summer. Should the Fed move more quickly than current consensus expectations, it could introduce volatility into markets, which we still think the Fed wants to avoid given the present uncertainty around the path of the economic recovery.

If central banks are pulling back, should you?

But as markets look to the Fed’s June meeting for the next policy clues, they’re also watching the European Central Bank amid rumblings that it, too, could be at the point of dialing back purchases in light of growing optimism around the vaccine rollout in Europe and an improving regional growth outlook. A move in that direction would put at least four of the major global central banks on the path toward some form of policy pullback.

As the chart shows, there has been an apparent correlation between global stock prices and the balance sheets of major global central banks. However, we maintain that too much has been made of this relationship, and that central banks exiting stage left isn’t necessarily a risk for risk assets such as stocks and corporate bonds. But it is certainly something to be cognizant of.

As central banks plot their exits, are markets at risk? 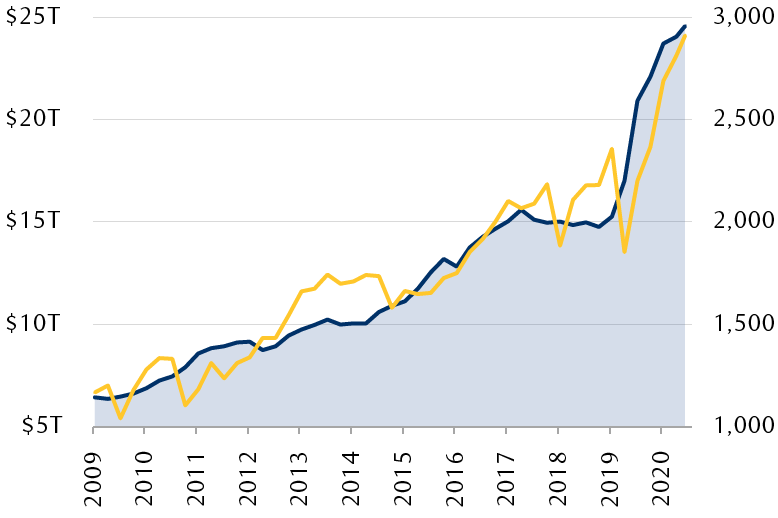 Beneath the surface, the actual relationship between stocks and central bank balance sheets has been tenuous at best over the years. The last time U.S. markets had to contend with fears around the Fed ceasing its asset purchases was at the end of 2014, and while many feared at the time this would put the market rally in jeopardy, the S&P 500 went on to deliver returns greater than 30% from 2015 through 2018. The same was true at the end of 2017, when the Fed’s balance sheet actually began to contract while risk assets continued to perform strongly, broadly speaking.

Erring on the side of caution

At the end of the day, and regardless of how strong the global recovery from the pandemic may be, we believe central banks aren’t going anywhere anytime soon. Even if the Fed does wind down its asset purchases by the end of next year, the central bank will very likely continue to reinvest interest earned and maturing bonds, keeping its balance sheet flat as it did from 2015 through 2017. We don’t anticipate the outright sale of bond holdings.

The lessons of the central bank experience in the aftermath of the global financial crisis showed that the costs of removing accommodation too early can be far greater than the costs of moving too late. Nowhere was this seen more clearly than in the case of the European Central Bank’s decision to raise rates in 2011, only to find itself forced to reverse course almost immediately, an episode that culminated in negative policy rates just a few years later.

While central banks develop their exit plans, and with headline risks around the issue likely to only grow in the months ahead, we believe investors can expect ample policy support will likely remain in place over any reasonable time horizon.