RBC Wealth Management serves the needs of high net worth, affluent and institutional clients worldwide through a full range of tailored solutions.

RBC Wealth Management’s Global Portfolio Advisory Committee monitors six major economic indicators to gauge recession risks. The table directly below compiles our view of recession risks based on each indicator’s current position and recent movement. The interactive charts that follow show how these indicators have moved over time, with U.S. recessionary periods highlighted. Below each chart is an explanation of the indicator and our view of its current status. 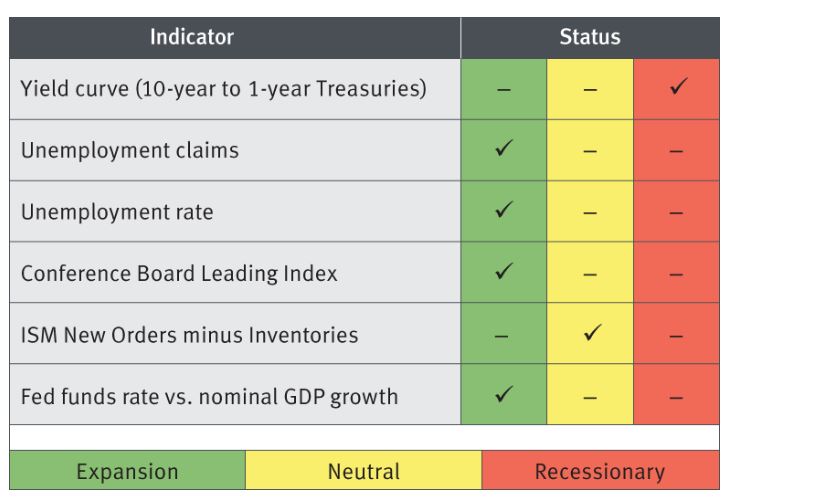 For a detailed view of each indicator, please see the charts and text that follow. 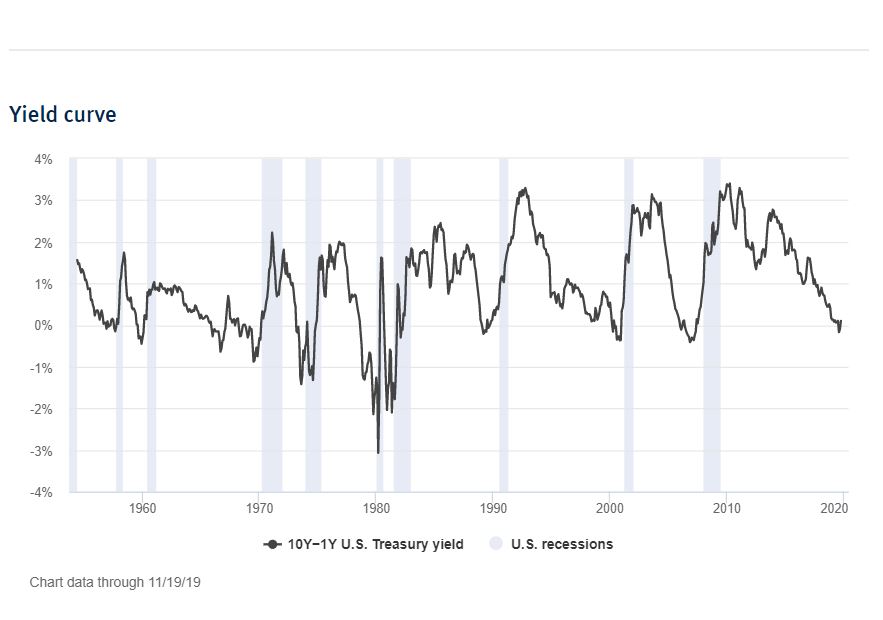 The 10-year Treasury yield is normally higher than 1-year Treasury yield, but this relationship usually inverts several quarters before a U.S. recession begins. The monthly data inverted in August 2019, suggesting a U.S. recession could get underway in the late summer or autumn of 2020. Most yield curve inversions are caused by the Fed pushing short-term rates higher in an effort to cool down an overheating economy. This time, however, the inversion was caused by the 10-year Treasury yield plummeting as European and Japanese investors, dissatisfied with negative yields in their home debt markets, rushed into U.S. Treasuries, thereby pushing the yields they offer sharply lower. There are few, if any, signs that credit conditions have tightened in the U.S. or elsewhere. The yield curve de-inverted in October, but this does not signal “all clear”—historically, the yield curve has typically done this before the recession starts. 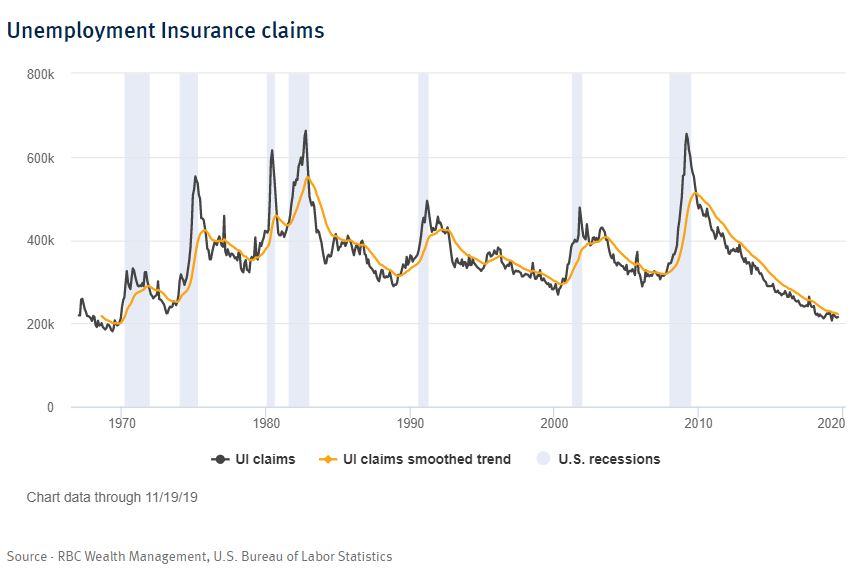 A bottoming of unemployment claims has reliably preceded the arrival of a U.S. recession, with the cycle low typically occurring several quarters before the recession’s onset. Currently, the smoothed trend of weekly claims continues to move lower. The lowest weekly posting since 2007 was back in April, so if the trend were to turn higher from here without a new weekly low being set, then history suggests a recession would most likely materialize in the spring or summer of 2020. The GM strike did not inflate claims unduly or, to put it more accurately, the strike’s effect was offset by other declines. 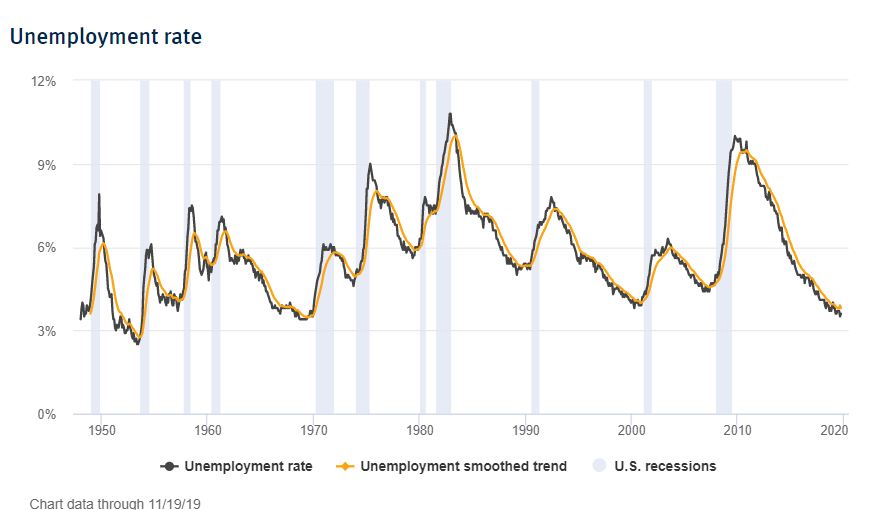 Once the unemployment rate turns the corner and begins trending higher, the start of a recession is typically two to six months away. While recent data puts the unemployment rate only one tick above its most recent low of 3.5%, which was the lowest posting in almost 50 years, we note that unemployment has been sitting below 4% for almost a year. It would take only a couple of monthly readings at 3.9% or higher to shift this indicator out of expansionary territory. However, given Labor Department estimates of 7.1 million unfilled jobs in the U.S. versus six million unemployed, it seems quite possible the unemployment rate is not yet ready to turn higher. 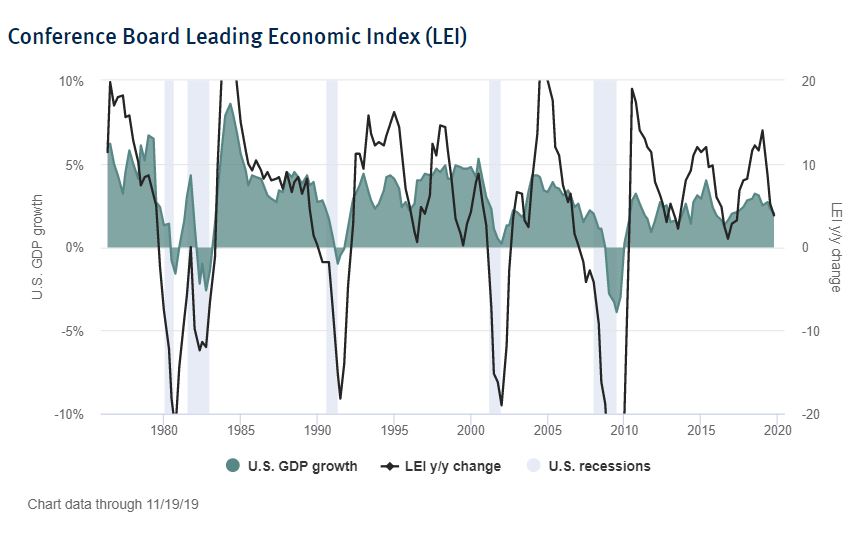 This indicator is something of a hybrid; it is put together by the Conference Board using 10 monthly economic variables. Three of these (Unemployment Insurance claims, the yield curve, and ISM New Orders) figure in the calculation of our “Recession scorecard,” so there is a bit of double counting here; we don’t know exactly how much, because the Conference Board’s method of dynamically weighting the 10 variables is proprietary. Whenever the LEI has fallen below where it was a year earlier (shown as negative values on the chart), a recession has always followed—typically, about six months later. Currently, the LEI sits about 1.9% above where it was a year ago. We think it would take two to three months of weakening data from here to push the year-over-year change into negative territory. Were this scenario to unfold, it would suggest a recession would be likely to start in the summer of 2020. 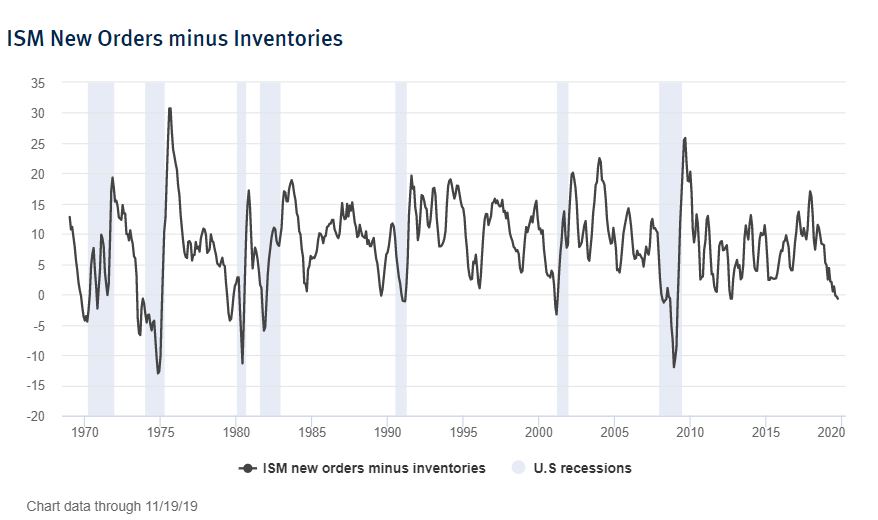 The ISM Manufacturing Index is often referred to as a leading indicator, but in our view it has not been very useful as such, having missed some important turns in the economy by wide margins. But two components of the index, taken together, have a good track record of signaling recessions as they begin or shortly before they begin. The difference between the New Orders component and the Inventories component has fallen below zero near the start of most U.S. recessions. But it has also occasionally registered a false positive, signaling that a recession was imminent when none occurred. Therefore, we view this as a corroborative indicator—one to pay attention to if other, longer-term indicators are saying a recession is on the way. It has just fallen below zero in the past three months but we think some one-off factors (including the GM strike and Boeing’s difficulties, among others) were to blame. There was some improvement in the most recent month, which we think could push this indicator back above zero soon. 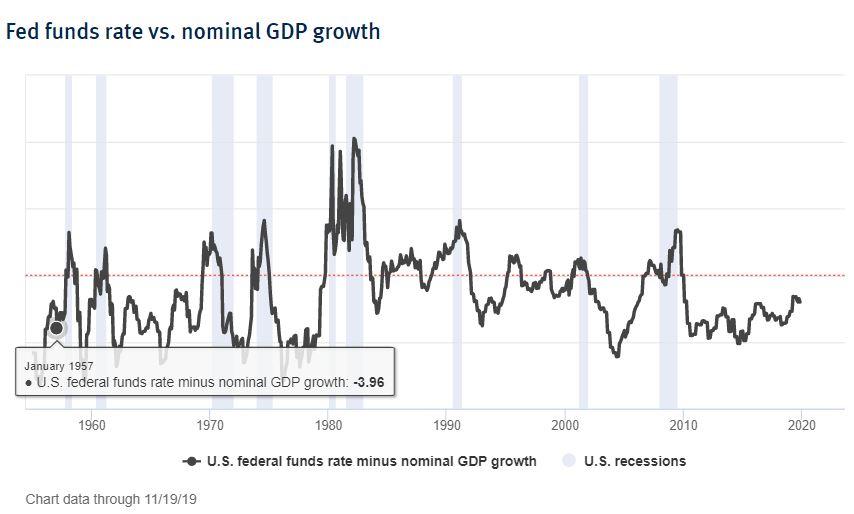 Since the federal funds rate came on the scene in the early 1950s, there has never been a U.S. recession that was not preceded by the fed funds rate rising above the year-over-year nominal growth rate of the economy (the growth rate before adjusting for inflation). In Q3 2019, the nominal GDP y/y growth rate was about 3.75%. The fed funds rate is now sitting at 1.75%—that’s 2.00% below the run rate of the economy, or eight 25 basis point Fed rate hikes from here. This indicator is saying borrowing rates are just not high enough to choke off growth in the U.S. economy. And in our view, they don’t look likely to get there anytime soon.