As central banks turn to the well-worn easy money policy playbook, we ponder the limits to these policies and whether they may cause future problems.

After several years that saw central banks on a path back to normality—some raising rates gradually, others holding steady—in 2019 global central banks shifted back into easing mode by cutting interest rates and/or restarting asset purchase programs. And with that, the “hunt for yield” from earlier in the decade is back on.

While central banks are again taking pains to shore up economic growth, one should also accept that the current expansion is likely in the later stages. And as we cast our eye across the global yield landscape, we see that investors have rarely been paid less to take on more risks. It was a banner year for fixed income performance in 2019. But a far more challenging environment is likely waiting in the wings in 2020.

So, given the state of play in fixed income markets, what should be on the minds of investors in the coming year? In a wide-ranging conversation, two of our U.S. and Canadian fixed income strategists break down the market dynamics that are likely to shape fixed income investment strategy—many of which are also considerations at the broader asset allocation level.

Mikhial Pasic: The current level of interest rates is a good place to start the discussion. There are some extraordinary things happening on this front which permeate the investment decision-making process across all asset classes. Virtually every investor domiciled in a developed market is facing the lowest rates they’ve ever seen—and that statement has rung true for the better part of a decade. The apparent permanence of the trend may have desensitized people to the risks and the potential side effects of low rates.

Thomas Garretson: Right, but global yields have been declining for the better part of 40 years—largely a reflection of well-discussed reasons such as maturing developed economies, low inflation, aging demographics, and increased levels of saving. One could argue that the permanence of the trend is just that, permanent, and investors awaiting a return to some higher level of yields may be making suboptimal investment decisions by failing to acknowledge that reality.

Pasic: Rates don’t have to reverse higher tomorrow, but there are ramifications of an extended period of low and even negative interest rates. In business cycles it’s often the case that the solution for one problem becomes the source of the next. Low rates and quantitative easing were part of the solution to the debt problems of 2008. Higher asset prices and a reduced interest burden helped to stabilize a precarious situation. But for every borrower there is a saver, and low rates are challenging for savers. The “fix” for the debt problems of the last decade has created a new set of challenges for savers.

Garretson: I think there’s a misconception that central banks are the source of low interest rates when in fact they are simply reacting to market forces. For the reasons stated previously, the “natural” rates of interest globally are historically low, and likely to remain there. For central banks to provide stimulus to economies, rates have to be below those levels. As former Fed Chair Ben Bernanke made the case in the aftermath of the Fed’s zero interest rate policy that was in place from 2008 to 2015 amid worries about the harm being done to savers: raising rates for the sake of savers would only make everyone worse off as it would likely spark a recession and put the economy right back where it started.

Pasic: It’s tough to debate the merits of this policy with one of its architects, but it is worthwhile to try and ascertain the limits of these policies. Ultimately, it seems that the plight of the saver rolls up into a bigger institutional challenge when pension obligations are taken into account. Additionally, there are already signs that we are seeing a diminished impact from additional rate cuts from both an inflation and GDP growth perspective.

Garretson: If corporate debt levels are elevated at a time when so too are recession risks—why aren’t we seeing that reflected in credit markets? Investors have rarely been paid less to take on more credit risk, with yields near the lowest levels since the financial crisis more than 10 years ago. Are rich valuations in credit markets purely a function of central banks’ efforts to encourage risk-taking?

Pasic: Both all-in bond yields as well as the yield differential between lower-rated and higher-rated bonds are below their historical averages. However, income needs for investors have not reciprocally come down. This leaves the saver with two choices: save more money, or assume more investment risk. This is true at both the individual level and the institutional level.

A retiree in Ontario needs to have approximately CA$2 million invested to earn a minimum-wage-equivalent income stream from a Government of Canada bond that yields 1.5 percent. Twenty years ago, when the minimum wage was approximately half the current amount and Government of Canada bonds yielded nearly six percent, only around CA$250,000 of savings was needed to earn minimum-wage-equivalent income. In today’s market, an investor in search of a six percent yield needs to opt for a high-yield bond, a preferred share, or a stock.

Pensions face the same challenge, and there are a number of notably underfunded public and private plans despite a decade of strong financial market returns. This is partly because return targets remain in the seven percent area, necessitating plan sponsors to either make additional contributions or accept more investment risk. The latter has been the more palatable choice and allocations to high-yield bonds, exotic credit structures, and both public and private equity have increased.

Garretson: Let’s turn to the economic outlook as recession risks are likely to remain front and center for investors in 2020. When investors think recession, they think credit downgrades and defaults. What do you think about those risks at this stage?

Pasic: In the midst of an economic expansion that has lasted over a decade and in today’s world of ultralow rates, even highly indebted companies are able to comfortably service their debts. But in a recession, corporate revenues, profits, and cash flows available for debt service shrink. Corporate borrowing rates often move sharply higher in such periods—especially for the lowest-quality borrowers, a much larger fraction of the total today—making refinancing of maturing debt difficult or even impossible for some.

Another element of this story to watch is market liquidity, as there has been a push into illiquid categories like private equity and structured credit. This often amounts to both debt and equity investments that are tied to a leveraged company, in a deal structure that can be difficult to trade. The challenge of trading these bonds can be compounded by the ongoing retreat of market makers including banks. Dealers now only hold one bond for every 40+ bonds held by the mutual fund industry, down massively from one bond for every two bonds held by funds 12 years ago.

Poor liquidity conditions appear to be accentuating some price moves to the upside right now as investors reach for yield, but that could reverse if the tone sours and credit downgrades prompt forced selling. Nearly 15 percent of the investment-grade market is rated BBB−, and approximately 30 percent of the leveraged loan market is rated B−. In each of these instances, meaningful gaps lower in prices could occur if a 1-notch downgrade were to happen because those ratings buckets represent the minimum rating for key investors in both categories.

Garretson: But beyond income, the appeal of having a fixed income allocation is simply for the lower volatility and the preservation of capital it provides. Despite starting from a base of historically low yields, having a fixed income component of safety in a portfolio to balance against the volatility inherent in stocks is likely to remain valuable. Even at the depths of the financial crisis, the decline in investment-grade corporate bonds over any one-year span was just −14 percent, while defaults peaked at only 0.42 percent, compared to a maximum decline of nearly 50 percent in stocks—the same held true globally.

So sure, there are plenty of risks on the credit landscape in 2020, but there are always risks. Though recession risks are becoming elevated, it remains our expectation that any downturn—when it arrives—is likely to be comparatively shallow. We favor upgrading quality in corporate bonds, but largely because the yield available in speculative-grade corporates is exceedingly low relative to the risks.

Despite low yields, bonds will continue to provide lower volatility and capital protection 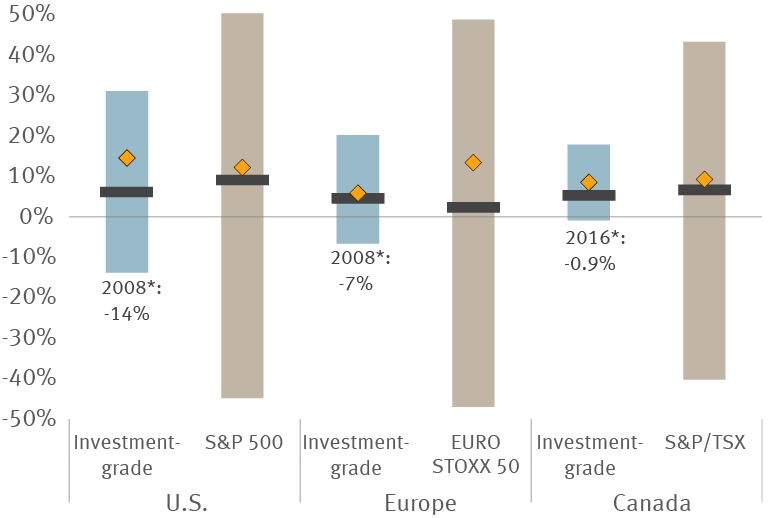 Pasic: Thinking ahead to 2020 in Canada, we see short- and intermediate-term bonds as attractively priced given we believe the risk of Bank of Canada rate cuts is greater than implied by current market pricing. We view inflation-protected bonds as a good way to source longer-term exposure, as market expectations for inflation in Canada are near all-time lows. Preferred shares appear to be the most attractively valued category in credit, and we believe the downbeat sentiment that lingers over the space brings opportunity for investors who are skeptical of the widespread pessimism.

Garretson: The seven percent return of the Bloomberg Barclays Global Aggregate Index in 2019 will be hard to match in 2020, and we expect a return to coupon-like returns for most fixed income sectors globally. Amid lingering concerns that global growth will remain lower, we see limited scope for sovereign bond yields to move materially higher, while credit spreads could widen if market volatility or recession risks materialize over the course of the year. On balance, we would continue to favor interest rate risk over credit quality risk.

Step inside your comfort zone

The salient point for global fixed income investors is that they should not let a low yield environment push them out of their comfort zones and into making decisions that could put portfolios and long-term investment objectives in jeopardy.