Historical, cultural, and political ties between the U.S. and EU forged, in the words of the European Commission, “the largest, most bilateral trade and investment relationship in the world.” The importance of this transatlantic relationship cannot be underestimated.

The U.S. and the EU have long been each other’s largest trading partners, and this will remain the case now that the UK has ditched the EU. According to the Congressional Research Service, the EU27 (i.e., the EU excluding the UK) sent $566 billion of goods and services to the U.S. in 2018, accounting for some 20 percent of its total exports and close to four percent of EU27 GDP. Meanwhile, the U.S. exported $433 billion worth of goods and services to the EU27 that year, accounting for close to two percent of U.S. GDP. 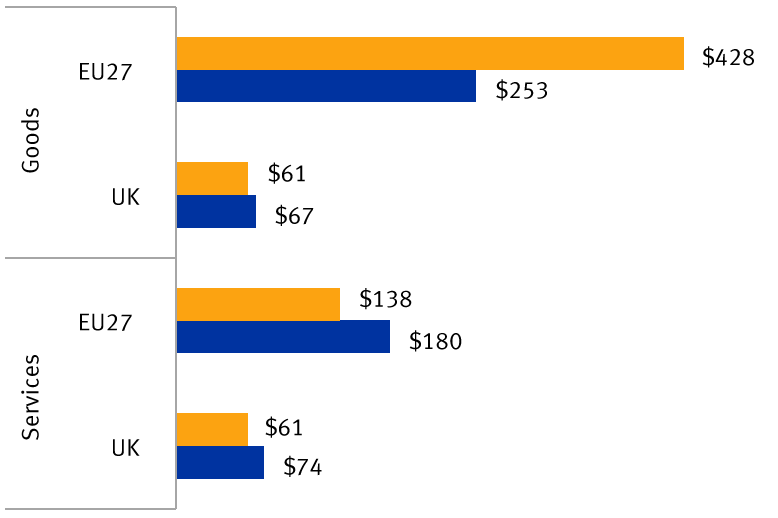 Note: EU27 refers to the EU excluding the UK.

Hence, with the EU corporate sector so exposed to such an important partner, with large companies generating some 20 percent of sales from the U.S., the future direction of Uncle Sam’s foreign, trade, and regulatory policies will hold sway with the Continent. The American economy’s growth prospects and potential changes to U.S. policies will be key, in our view, as they feed through to European corporate earnings.

The U.S.-Europe relationship has been strained over the past four years as President Donald Trump, who is no fan of the EU, believed the bloc was taking advantage of the U.S. through unfair trade practices. He imposed 25 percent tariffs on European steel and aluminium exports and threatened to slap further tariffs on other goods worth more than $20 billion. However, a potential full-blown trade war with the EU does not share the same bipartisan support in the U.S. Congress as does one with China.

Should the status quo prevail and Trump remain in the White House for another four years, the rhetoric against the EU could very well escalate. No longer worrying about a second term, the president’s trade policy could become more aggressive. Should the EU be on the receiving end of further tariffs, it has already said it would retaliate. Given that it takes in some 20 percent of U.S. exports, Europe is in a position to throw its weight around and could strike back effectively, in our view. If U.S. tariffs re-emerge, EU export-oriented sectors most at risk include manufacturers such as automakers and luxury goods.

Outside of the tariff issue, other sectors would likely fare better. With the fear of greater regulation receding, we would expect companies in the Energy and Financials sectors to enjoy a relief rally.

A Joe Biden presidency would probably herald an era of less tense international relations between the U.S. and the EU, in particular as Biden has vowed the U.S. would rejoin the Paris Climate Accord, an international agreement that attempts to mitigate greenhouse gas emissions and allows members to set carbon emission targets and restrictions for their economies. With a backdrop likely to be more conciliatory, longstanding contentious issues ranging from data protection to taxation of U.S. tech giants could be tackled. It is also more likely these disagreements could be settled within the framework of existing institutions and processes.

Moreover, we believe Biden’s green agenda would be positive for European sectors exposed to energy efficiency, smart mobility, and renewables, areas where Europe is a leader. By contrast, should the new president focus on reforming health care policy and drug pricing, the European (and UK for that matter) Pharmaceuticals sector could be negatively affected. European pharma companies generate as much as 35 percent to 50 percent of sales from the U.S.

UK: Out in the cold?

A new U.S. administration could deprive the UK government of an important source of support. Trump has been a backer of the UK leaving the EU, a position that emboldened the Brexit movement, in our view.

For Britain, the key issue is whether a Biden presidency would diminish the prospect of reaching a trade deal with the U.S. to offset its loss of access to the EU single market. Securing a U.S. trade deal was central to the Brexit strategy, seen by many Brexiters as the ultimate prize that would more than make up for the cost of leaving the EU’s economic structure and institutions. Recently, the UK government admitted that a trade deal with the U.S. would only add $4.3 billion to the post-Brexit UK economy over the next 15 years, or a paltry economic boost of some 0.2 percent.

Biden’s position is less well known, though when he was vice president the Obama administration opposed preferential trade terms for a UK “out of Europe.” A Biden administration would also be unlikely to prioritise Britain, with its 60 million inhabitants, over the EU, which has a population of some 450 million. Already, the U.S. views the UK as a less valuable ally, having lost much of its role as a lever of influence with the EU.

Talks for a U.S.-UK free trade deal are currently on hold until the spring of 2021 due to the COVID-19 pandemic. A new president could pause all negotiations while re-examining U.S. trade policy, causing further delays.

For Europe and the UK, we believe domestic factors including monetary and fiscal policies will clearly be the main drivers of financial markets. Yet changes in the U.S. trade and regulatory frameworks could also influence prospects for certain sectors. Investors who want to mitigate uncertainty could focus on sectors with upside potential regardless of the election’s outcome, such as infrastructure, or those that stand to benefit from structural growth and megatrends.