Autumn has once again ushered in volatility and a swift global equity market selloff. The S&P 500 dropped 3.5% on Wednesday, dragging other markets down with it, and has declined 7.6% since its all-time high on September 2.

Index returns since the September 2, 2020 high in the major global indexes (not including dividends) 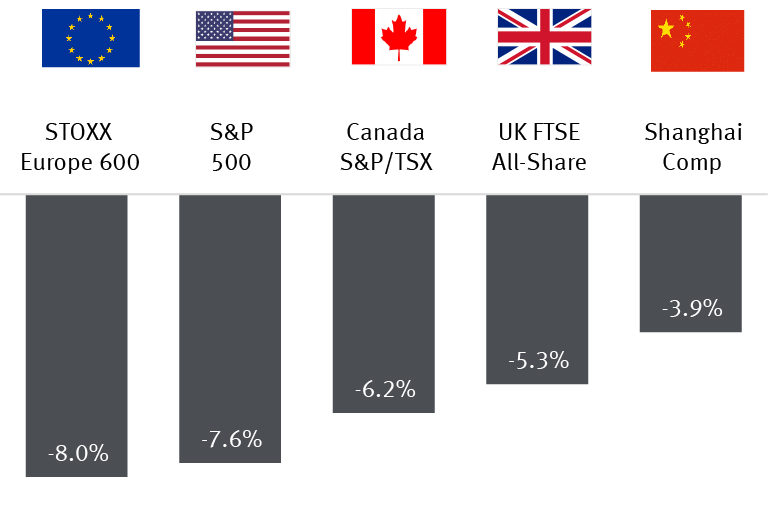 Source - RBC Wealth Management, Bloomberg; data through 10/29/20 and is in local currencies

The discontent is primarily driven by:

Considering equity markets’ rocket-like surges off the March lows, which pushed higher and lasted longer than most expected, the volatility shouldn’t be overly surprising or concerning. We view this as typical market behavior when uncertainties become amplified.

Volatility has jumped but remains well below the March extremes 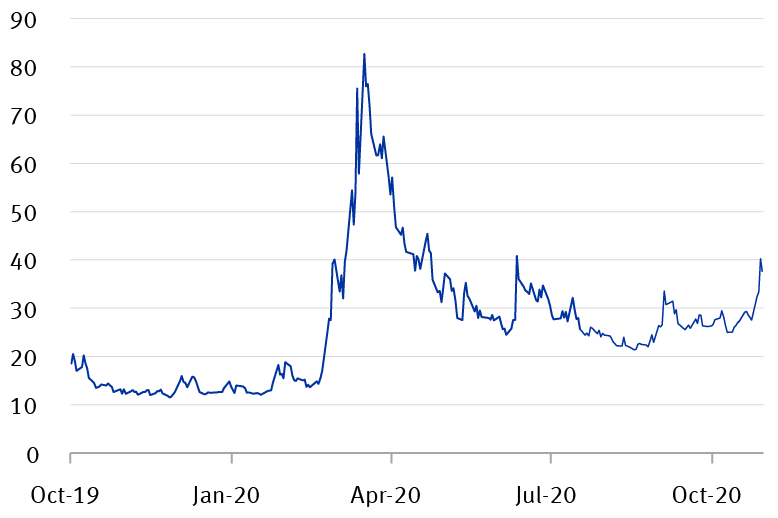 How threatened is the fledgling recovery?

Clearly the concerns boil down to economic vulnerabilities. Will the renewed COVID-19 shutdowns and delayed U.S. fiscal support hamper the recovery or cause a double-dip recession?

We don’t think the U.S. or global economies will fall back into a deep pit like they did when the first wave of COVID-19 hit earlier in the year.

First, health officials have a better handle on how to treat those who are sick. More effective treatment regimens are being implemented, new therapeutics are coming, and vaccine progress seems likely, according to medical experts. Even though COVID-19 infections have spiked, testing has also increased markedly. In many countries, daily death totals have not risen by the order of magnitude that infections have.

Second, many government leaders around the world are striking a balance: Protect people from virus risks, but also minimize the economic and psychological consequences that quarantines and shutdowns have on the population.

Third, we believe additional U.S. fiscal stimulus will ultimately pass, it’s just a matter of when, the amount, and the composition of the relief. Such details shouldn’t hinder markets over a long-term time frame, in our view. Overall, fiscal support in the U.S. and elsewhere will likely be maintained as long as unemployment remains high and physical distancing restrictions persist, with their constraining impact on key segments of the economy.

Of course, the elephant in the room (no pun intended) is the U.S. election. Its impact on equity markets at this stage is more difficult to gauge, and we think this issue has been a less important factor for the current pullback than the aforementioned catalysts.

Market participants have had a lot of time to consider the various potential election outcomes, including possible unorthodox developments related to delayed election results, a contested election, or even civil unrest. Election scenarios have been poured over inside and outside of the country.

However, in recent weeks there has been debate among some institutional investors about the degree to which large 2021 fiscal spending packages may already be priced into the market, and about whether the market would benefit most over the near term from a divided or unified government.

Perhaps the debate surrounding these issues, combined with the overall uncertainty about the election outcome, has prompted some short-term-oriented institutional investors to shift positions ahead of the election.

Stumbles are not surprising

Even with the lingering COVID-19 and related challenges, we think the greatest deteriorations in economic conditions and equity markets are in the rearview mirror.

As we have stated previously, the economy’s path back to pre-COVID-19 output levels will take time and will include bumps along the way. What we’re experiencing now is one of those bumps.

While near-term risks are very much in evidence, looking ahead we expect the largest economies, corporate earnings, and major equity markets to gain more ground over the next 12 months. The U.S. economy should reach its pre-pandemic level by 2022 and return to its prior growth trajectory in 2023—a much shorter time frame than it took following the global financial crisis.

This should be fueled by progress taming the COVID-19 virus, the ongoing normalization of economies, and especially central banks’ entrenched commitment to accommodative, ultralow interest rate policies.

The free trade agreement between the EU and UK brings relief and challenges. We take a close look at the agreement and potential impact for investors.