Our thesis on European recovery was two-pronged. We expected the temporary factors that had crimped growth in Q4 2018 and Q1 2019, such as new auto emissions testing standards and the Yellow Vest protests in France, to recede during 2019. We also expected a stabilization in global trade and growth during the second half of this year after a difficult 2018. Together, these developments would have enabled the sturdy roots supporting the Eurozone economy—falling unemployment, healthy loan growth to the private sector (six percent for the euro area), and gently supportive fiscal policy in France, Italy, and Germany—to support new growth.

Trade’s contribution to Q1 growth is unlikely to be sustainable 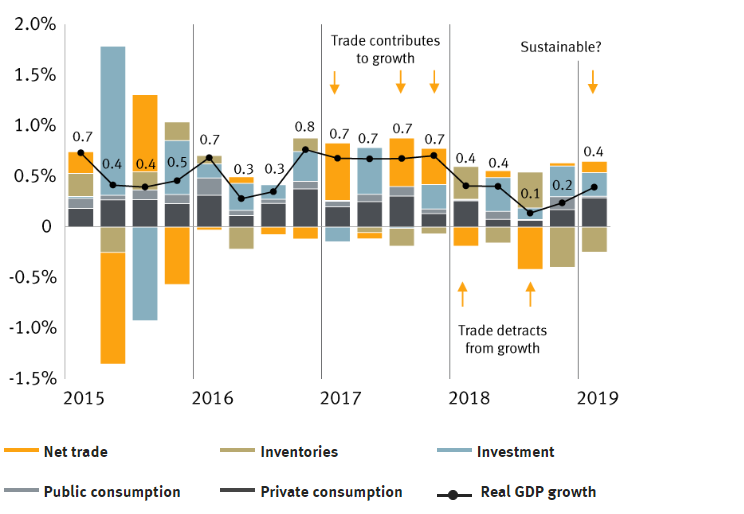 As we move further into the second half of 2019, many of the temporary factors are indeed waning, albeit slowly. But given the recent ratcheting up of trade tensions, it seems unlikely that global trade will indeed stabilize in the near future. Even if relations between the U.S. and its trading partners thaw somewhat in the short term, tariffs will remain in place as negotiations continue. The uncertainty will continue to damage global growth prospects, in our opinion.

Europe’s economy depends heavily on trade. Exports represent a high 44.4 percent of regional GDP, compared to 30.1 percent for the U.K, 18.6 percent for Canada, and 12.1 percent for the U.S., according to the World Bank. Of those exports, 39 percent go to Europe’s three largest trading partners: the U.K. (16 percent), the U.S. (15 percent), and China (eight percent), according to European Commission data. Hence, slowdowns in the economic growth of major trading partners due to trade tensions and the spectre of a hard Brexit create substantial headwinds for the region.

Trade volumes rising, but for how long? 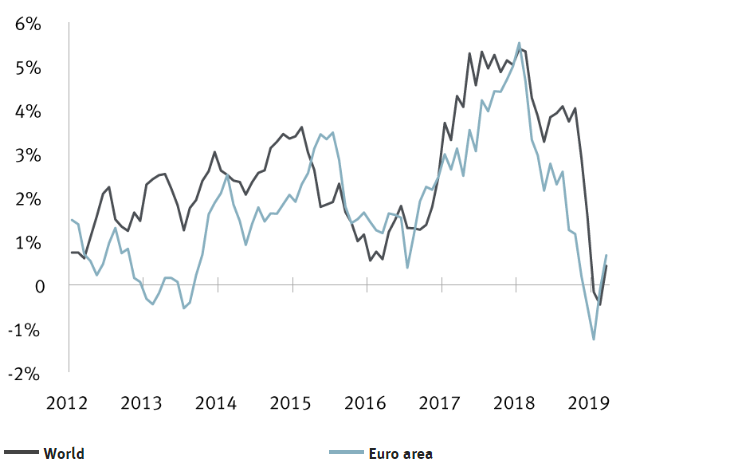 The March uptick may prove short-lived as trade disputes evolve.

Note: last data point is March 31, before the May escalation of the trade war

European economic data featured some green shoots in the spring, culminating in Q1 GDP growth of 0.4 percent q/q following a lackluster 0.2 percent in Q4 2018. However, recent releases have been less encouraging, with most falling short of consensus expectations. Consequently, the European Central Bank (ECB) has pared back its growth projections for FY 2020 and FY 2021.

The market’s inflation expectations have also fallen from 1.6 percent at the beginning of the year to 1.1 percent in mid-June.

We believe consensus corporate earnings growth forecasts will need to be adjusted to reflect this new reality, as they are too high at eight percent for this year and ten percent for 2020. Slightly negative Q1 earnings-per-share (EPS) growth for the region will make those full-year estimates difficult to achieve, and we believe European equities will struggle to outperform as long as downward earnings revisions prevail.

The ECB has announced it is prepared to take bold steps to prop up inflation and to support the regional economy should it weaken further. Despite interest rates already in negative territory, RBC Capital Markets now expects two 10-basis point rate cuts this year, in September and December. It is also possible that the central bank will relaunch its quantitative easing programme next year.

The ECB’s actions are unlikely to remove the key obstacle to the region’s growth, in our view: the global trade dispute. As discussed in a recent Global Insight Weekly article, central banks’ ability to boost economic expansion through ever-lower interest rates appears limited, at the margin. In a possible sign of things to come, U.S. President Donald Trump lashed out at ECB President Mario Draghi and the ECB for “making it unfairly easier for them to compete against the USA.”

Beyond this, we believe regional political tensions are likely to increase over the course of the next few months in three key areas.

It is unclear at this stage whether Rome’s dispute with Brussels will escalate. Our base case is that rising yields would act as a control mechanism to contain the crisis. Italian banks, which own eight percent of the country’s bonds, remain fragile due to non-performing loans reaching a high nine percent of total loans. They would be weakened further by rising yields, something we believe most governments would prefer to avoid.

But the current government might opt for confrontation, and the vicious cycle of rising yields and credit rating downgrades that would likely ensue. Faced with that reality, the country's political leadership could decide to head further into the storm or to change course, much as Greece did in 2015. Either way, we believe the developing situation would weigh on business sentiment and further dampen growth.

Equities have performed well, but …

After a strong rally in Q1 that brought European equity performance in line with the MSCI World Index, the MSCI Europe ex UK Index now trades at 13.4x 2020 earnings, in line with its long term average. Valuations are thus not low enough, in our view, to price in the challenges ahead. Moreover, when compared to the U.S. on a sector-adjusted basis that takes into account the lower representation of Tech in the European index, the discount of less than four percent appears minimal, and is not nearly as deep as the prevailing discount over the past 10 years. This doesn’t leave the region much of a valuation buffer, and supports our move to an Underweight position in European equities.

Taking all of this into account, we maintain that there is room in portfolios for an allocation to select European companies with strong business models and which operate in niche markets buoyed by secular growth, are supported by a global revenue base, and generate strong cash flows. We find these opportunities particularly in Consumer sectors, Health Care, and some Industrials.