Equity market risks: Separate the wheat from the chaff

Investors need to focus on the things that matter most to equity markets and not let the political storm in Washington rain on investment strategies.

A one-two punch brought U.S. and global recession risks back to the fore, pushing the S&P 500 down a total of three percent in two sessions and weighing on equity markets worldwide.

First, weak manufacturing and employment data poured cold water on the notion that the U.S. economy is in the clear. Second, the Trump administration formally opened up a new, Western front in the trade war by slapping tariffs on the EU.

Equity markets are also anxious about the forthcoming U.S.-China trade negotiations and Q3 earnings season. And … the impeachment investigation of President Donald Trump by the U.S. House of Representatives has generated uncertainty.

In other words, markets have a lot to juggle.

The recent selloff is reminiscent of many uncomfortable, topsy-turvy Octobers in previous years—a month notorious for volatility episodes. But the slide merely brought the S&P 500 down from the top end of the range, and it remains in the zone that it’s been in for two years.

We think it’s time to separate the wheat from the chaff.

Economic and earnings trends—the wheat—should drive portfolio decisions, in our view, as they matter most for equity markets. Trade disputes can certainly impact these trends.

Rancorous impeachment rhetoric is the chaff. We would not incorporate the impeachment process into asset allocation decisions unless it starts to meaningfully weigh on the economy and corporate profits—we see no signs of this so far.

Tune in the fundamentals

The trade war is at the heart of the challenges facing the global and U.S. economies. The existing tariffs and non-tariff barriers between the U.S. and China, the risk of more tariffs, and fears that the dispute could linger are weighing on U.S. manufacturing, and have helped knock the European economy flat on its back and have weakened Asia.

The new Western front in the trade war doesn’t help. The World Trade Organization’s ruling this week allowing retaliatory tariffs for past illegal subsidies of Airbus opens the door for up to $7.5 billion in U.S. tariffs on EU goods. This raises the risk that additional barriers could be erected by both sides.

If the trade disputes persist, the global and U.S. economies could weaken further. We will continue to monitor our U.S. recession indicators for signals.

At this stage, U.S. recession risks are more elevated than they were six or even three months ago, but they have not budged lately, according to our indicators. Four of six indicators are in expansionary territory, one based on manufacturing subcomponents is flashing a yellow caution sign, and one (the yield curve) is in the red. The disappointing manufacturing and employment data this week do not change these signals.

On the earnings front, we expect U.S. trends to be soft, but not recessionary. RBC Capital Markets recently lowered its S&P 500 annual earnings estimates a bit more for this year and next to $165 and $174 per share, respectively, signaling modest year-over-year growth.

The Q3 S&P 500 consensus estimate has slid to negative 2.4 percent, according to Refinitiv I/B/E/S. We think the growth rate will creep into positive territory by the end of reporting season, as most companies are likely to beat expectations. However, there are bound to be high-profile misses and warnings that could generate volatility. Also, the Q4 consensus of four percent year-over-year growth seems too high. We expect a number of companies to cut Q4 and 2020 estimates.

Tune out the political soap opera

If the economy and earnings are the wheat, impeachment rancor is the chaff.

The impeachment process in the House, and possibly a trial thereafter in the Senate, is certainly important to the country. But it may not necessarily impact the economy or corporate profits by a meaningful degree. 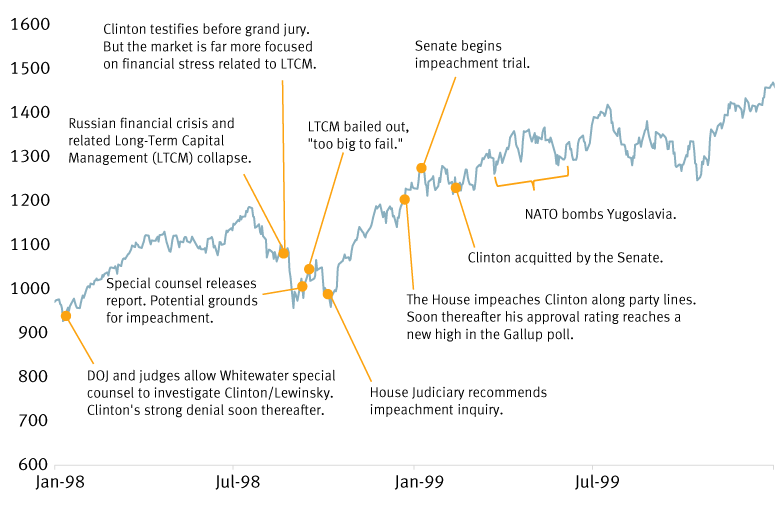 At the time, the market was much more impacted by the Russian financial crisis and the related collapse of a large U.S. hedge fund, Long-Term Capital Management, than it was by the Clinton saga.

During President Richard Nixon’s Watergate scandal and resignation in the 1970s, the economy and stock market were caught up in a host of problems, including the Yom Kippur War and Arab oil embargo. While Watergate developments caused selloffs at times, the market’s overall slump was heavily influenced by the oil embargo’s negative impact on gasoline prices, inflation, and the broader economy.

We think the Trump saga will generate periodic volatility for the market. If the impeachment process plays out and then moves to the Senate for a trial, history indicates there will be a massive amount of political and legal wrangling along the way.

We do not advise changing asset allocations in portfolios based solely on the D.C. drama. Stay focused on the economic indicators. If the impeachment and/or trial process becomes problematic for the economy by any meaningful degree, it will show up in the data.

As long as the trajectories of the global and domestic economies and corporate earnings remain at least in slow-growth modes rather than flash red recession warnings, we are comfortable holding U.S. and global equities at the Market Weight level in portfolios.