As had been widely expected, the Federal Reserve upped its rate hike pace at the May 3–4 meeting, raising the policy rate by 50 basis points (bps). After the 25 bps move in March, this brings the target policy rate to a range of 0.75 percent to 1.00 percent. It was an aggressive move, to be sure, and one not seen at a Fed meeting since 2000.

But what followed was perhaps the first “dovish” press conference in roughly a year from Fed Chair Jerome Powell, during which he pushed back against the idea that the Fed could increase the pace once again at the June meeting; markets had been pricing in a strong likelihood that the Fed could opt for a 75 bps increment, even as Powell indicated that 50 bps moves are likely to continue for at least a “couple” of meetings. Overall, there was a sense that the Fed Chair didn’t share the sense of urgency to raise rates that the market has shown of late, given all of the uncertainty around the economic outlook both domestically and globally.

While the pace of rate hikes was one focus of the meeting, the other was once again the idea of the “neutral” rate for the economy—or the point at which monetary policy is neither boosting growth nor restricting it. Powell noted that the true neutral rate can’t be known in advance, and that it’s an imprecise number; instead, he offered up a range of two to three percent, which is currently the range of all estimates from the Fed’s longer-run rate forecasts. In fact, that range hasn’t changed since June 2020, despite everything that has occurred in markets and the economy since then, suggesting policymakers have some level of confidence the neutral level does indeed fall somewhere within that range.

Highway to the danger zone?

The chart below shows how we think the Fed will approach rate hikes from here. We expect two more 50 bps hikes in June and July, which would take the upper bound to two percent, at the low end of the neutral range. After that point, we believe the Fed will pivot to a more cautious approach, moving in 25 bps increments that will take the policy rate to a level of 2.50 percent to 2.75 percent by the end of the year, around the midpoint of the estimated neutral range. From there, we envision the Fed once again adopting a “data dependent” approach as it begins work on engineering a so-called soft landing for the economy, which Powell said he believes the Fed has a “good chance” of achieving.

How far will the Fed take rates? 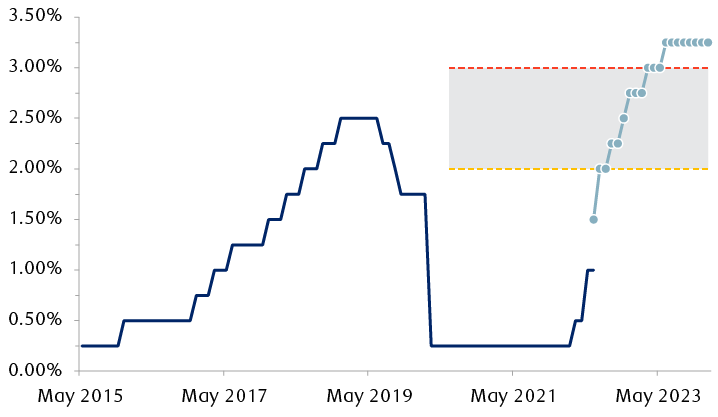 Line chart showing the expected path for the Fed funds rate following the 50 basis point hike at the May meeting. Fed Chair Jerome Powell stated that the approximate range of the neutral rate for the economy, a level that neither boosts nor restricts growth, is likely between 2% and 3%. We expect the Fed to take a more cautious approach within that range, with the pace of rate hikes slowing back to 25 basis point increments.

Source - RBC Wealth Management, Bloomberg; rate hike expectations based on OIS data, neutral range shows the low and high projections from the Fed’s Summary of Economic Projections; data as of 5/5/22

If inflationary pressures remain elevated and the labor market remains too tight, we think the Fed could proceed to move rates above the neutral range and into restrictive territory, as the market still expects will be necessary. But if inflationary pressures do ease into the back half of 2022, as RBC Capital Markets, LLC Chief U.S. Economist Tom Porcelli strongly expects, then a cautious approach will have proved prudent as the central bank reduces the chance of overtightening and potentially risking a recession in late 2023.

The bottom line, in our view, is that the Fed Chair has injected some optionality back into the outlook for rate hikes—turning aside from what was recently seen as a one-way path higher that might be followed unswervingly until something simply broke.

But whether that was really Powell’s intent remains a topic for debate, as market volatility has only increased in the aftermath of the meeting. The S&P 500 has since given up all of its post-meeting gains, dropping more than three percent through the midpoint of the trading session on May 5, as rate hike expectations have actually risen in the wake of his press conference.

Or perhaps the market was looking for the Fed to front-load rates in an effort to get policy back to neutral sooner, rather than later—implying that the Fed would have to do less in terms of rate hikes later on. With the Fed appearing not to share the market’s sense of urgency, the risk remains that policymakers will stay behind the inflation curve and need to raise rates more aggressively later.

No time for complacency

On the one hand, the Fed Chair signaled that there are reasons to be optimistic. Policymakers are seeing signs that inflation levels have peaked, borne out by market pricing as inflation expectations in the U.S. have indeed faded from their March highs. Record numbers of job openings alongside rising wages should continue to bring people back into the labor force, which in turn should take the steam out of wage inflation and ease pressure on the Fed to tighten policy.

U.S. inflation expectations may have peaked in March, but pressures are still rising in Europe 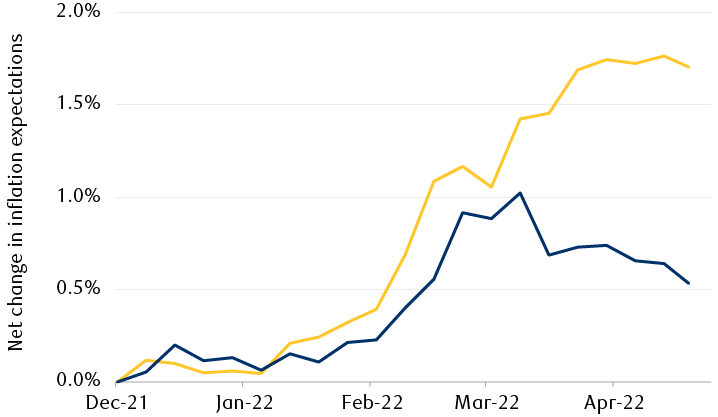 Source - RBC Wealth Management, Bloomberg, based on inflation-protected government securities; data as of 5/5/22

On the other hand, however, global inflationary pressures are still on the rise. Although we think the U.S. remains relatively well insulated from the energy-related shock waves reverberating through Europe, the pace of price increases will keep the pressure on all major global central banks. And the timeline for supply chain improvements keeps getting pushed back without a resolution to the Russian invasion of Ukraine and the lockdowns in China, which are driving port congestion around the world. At its June meeting, the Fed will update its economic and rate hike projections (which proved to be a point of consternation for markets earlier this year); a significant shift in the economic data points between now and then—in particular, the nonfarm payrolls report, due out this week in the U.S.—could bring about another hawkish outlook from the Fed.

There’s no doubt the Fed and other global central banks are walking a tightrope. But while we expect policymakers to remain aggressive in their tightening plans, this week’s meeting may have been the first sign that the Fed won’t be singularly focused on high inflation, but will maintain a measure of caution at a time when it seems that uncertainty is only increasing.

The world is on a journey to net zero by 2050. What does net zero mean? What could this world look like? And what are the challenges to getting there?