The 5.4 percent rise in consumer prices over the past year dominated market discourse this week. Inflation concerns were further strengthened by the accelerating pace of monthly price swings, with the June U.S. Consumer Price Index up 0.9 percent over May. Gains were concentrated in pandemic-linked sectors including used cars, restaurant meals, and hotel rooms. The distribution of price increases supports the U.S. Federal Reserve’s view of transitory inflation, while the magnitude of the gains and a record one percent monthly increase in core producer prices increase upward pressure on wages and the potential for sustained inflation. 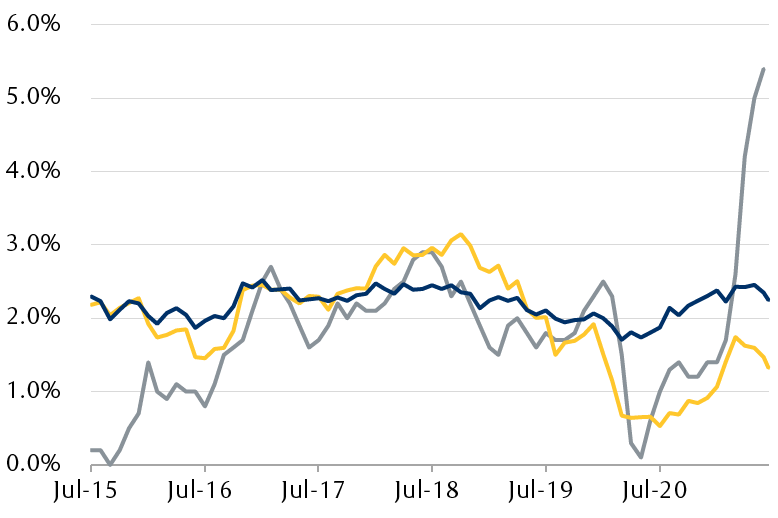 Note: 5y5y inflation refers to expectations for inflation over a five-year period starting five years in the future.

A Rorschach test for investors

The bottom line, in our view, is that interpretations of inflation data tell us as much about the analyst as they do the likely path of future events. The conditions are certainly present for sustained inflation: businesses have an ability to pass costs on to consumers, and real wages have declined. Workers thus have a strong incentive to seek higher wages, which employers can provide by passing on the cost to consumers, potentially setting off the classic wage-price inflation spiral.

But the appearance of some inflationary conditions does not inexorably lead to sustained future inflation. Prior episodes of negative real wages have not caused sustained wage pressure; indeed, the share of national income paid to labor has declined from 64 percent to 60 percent since 2000 amid low real-wage growth. Demographics, income distributions, trade, and technology helped contain inflation in the recent past, and with nearly nine million former wage earners currently off payrolls, the downward forces on prices and wages remain strong. Even if workers can leverage post-pandemic conditions to increase earnings, the gain may be one-time, because the labor pool will likely grow after expanded unemployment benefits expire in September for most households. 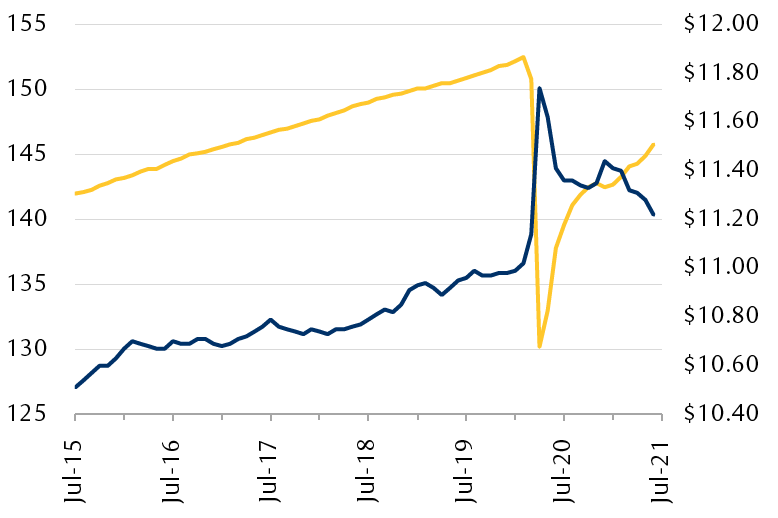 Federal Reserve Chair Jerome Powell downplayed the June inflation data in congressional testimony this week, and emphasized that the Fed was “a ways off” from starting to reduce its $120 billion in monthly bond purchases.

To date, markets have taken a benign view of both the data and the discourse; long-tenor rates initially declined in response to the higher consumer and producer price inflation numbers, while short-end rates fell in response to Powell’s comments on the likelihood of ongoing monetary support. Both long-term rates and inflation expectations have remained steady at or below historical levels, despite the absence of a Fed response to rising inflation.

We think the market’s response to the most recent inputs is broadly appropriate, given the strength of existing disinflationary forces. Bond investors are also recognizing potential risks to growth, such as smaller-than-expected fiscal programs or higher consumer savings rates. Just as importantly, we believe markets are aware that the Fed has a proven toolkit to bring inflation down, and that the central bank would be under pressure to respond if inflation expanded to broad swathes of the economy.

The market’s response underscores the fundamental truth that while it is easy for economists and strategists to point out potential Fed policy mistakes, it is difficult—and usually counterproductive—for investors to position for extreme outcomes like rampant domestic inflation or stagflation. These outlier events rarely occur and even when they do, timing the market response is incredibly difficult, as this week proved: not even a multi-decade high in the pace of Consumer and Producer Price Index increases, paired with a Fed chair committed to continuing monetary accommodation, could create gains for bond bears.

This week’s events have left our views mostly unchanged. We continue to believe that inflation will largely prove transitory, although the level of increase may be higher than the Fed or the market thought likely only a few months ago. As a result, we see the 10-year Treasury ending the year with a yield near 1.75 percent.

Despite this relatively benign outlook and Powell’s comments on tapering, we think it is increasingly likely that the Fed will begin to reduce bond buys in Q4 of this year, as several of the more hawkish members of the Federal Open Market Committee will lose their votes in 2022; these members are likely to dissent if policy remains unchanged by year’s end. Maintaining unanimity is always important to preserve the central bank’s credibility, but particularly so with inflation above the two percent target and interest rates at zero.

An earlier start to tapering should have little fundamental impact, in our view. Even with tapering, the Fed will likely be adding bonds to its balance sheet throughout 2022. Initial market response to the taper announcement may be negative, but this should fade over time. In the end, Powell and other doves may choose to accept these costs in exchange for more votes in favor of what would still be accommodative policy.

Investor interest in asset purchase tapering often comes at the expense of fiscal policy focus. This is likely a mistake. The breadth of potential fiscal policy outcomes is striking; a bipartisan Congressional group has agreed on nearly $600 billion in infrastructure spending, while on the left flank, Democratic Senator Bernie Sanders is advocating a $6 trillion increase in federal spending over 10 years. Should Congress fail to pass any infrastructure legislation, interest rates would likely drop even further on growth concerns, while a large, debt-fueled spending package could push yields higher.

Fortunately for investors, the high degree of uncertainty around inflation and interest rates can be countered in part by solid asset allocation and periodic rebalancing. We continue to believe that investors should take a “barbell” approach to fixed income allocations: emphasizing longer-maturity Treasuries for their outperformance potential during economic downturns, along with more growth-oriented investments that have higher return potential.