European economic growth has veered off track; can the economy regain its long-term growth trajectory?

The extent of the European economy’s slowdown took observers by surprise in 2018. Quarterly GDP growth ground down to a meagre 0.2 percent in Q4 2018, after consistently posting quarterly growth of around 0.7 percent in 2017. While slowing global trade was the main culprit, an outburst of political risk and unfortunate one-offs exacerbated the situation.

In contrast to the U.S., Europe is a much more cyclical economy which depends heavily on external demand. Exports of goods and services represent 28 percent of GDP for the eurozone versus only 12 percent for the U.S.

The eurozone is also unusually exposed to emerging markets. RBC Capital Markets points out that the region sends some 40 percent of its exports to emerging economies, mostly on its doorstep in emerging Europe, but also to Asia, half of which goes to China. The fall in euro area export growth was largely due to declining demand from Asia, though emerging economies closer to home (Poland, Turkey, and Russia) also played a role. 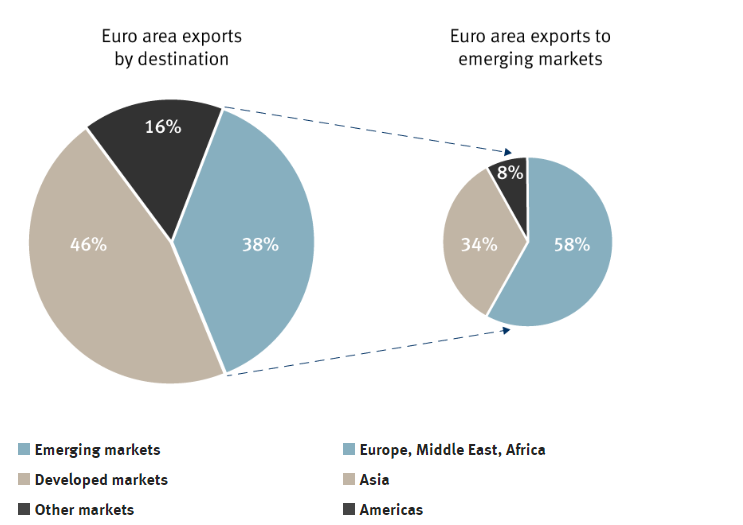 In addition, political risk flared up in Italy and France. In Italy, the inexperienced/radical government’s acrimonious budget negotiations with Brussels pushed Italian bond yields sharply higher, discouraging lending and investment. While it eventually agreed to EU demands to rein in spending and restrain the ballooning national debt, the damage was done. Italy slipped into a technical recession, with the economy shrinking by 0.1 percent in Q3 and by 0.2 percent in Q4. In France, the “Yellow Vest” protests against reforms dented domestic economic activity.

Meanwhile, Germany was affected by temporary factors such as new auto emissions testing standards, which drove car and car part output down by eight percent. This shaved close to 0.4 percent from German GDP in Q3 as auto manufacturers postponed production of models not yet certified under the new regulations. Finally, a drought left water levels in the Rhine, a much used transport waterway for heavy industries, perilously low, preventing barges from operating at full capacity.

With the impact of some of these factors still being felt, the 10-year German Bund yield fell below 0.1 percent in early February, suggesting a very subdued outlook for economic growth. Could the slowdown morph into something more sinister?

Many dynamics, however, point to the possible emergence of a cyclical upswing later this year, enabling the eurozone to get back to its trend growth of some 1.5 percent per annum. Trade is showing signs of stabilising and some of the aforementioned transitory problems are beginning to recede. Car certifications are starting to be issued in Germany, enabling manufacturers to meet the pent-up demand, while the Yellow Vest protests in France look likely to dissipate further, if not disappear altogether.

In France, President Emmanuel Macron has refocused his agenda towards domestic policies. His party’s majority in Parliament suggests he can govern for his full 5-year term. Public finances are in good enough shape for the government to stimulate the economy in an attempt to appease protests. It’s worth remembering that past reformers, such as the U.K.’s Margaret Thatcher and Germany’s Gerhard Schroeder, faced notable resistance before transforming their economies. The risk, in our view, is that Macron bows to protest pressure and considerably waters down the pro-growth reforms.

Importantly, Europe does not display any imbalances or excesses that would need to unravel. RBC Capital Markets points out that household debt-to-income ratios, already low, are on the whole falling, suggesting consumers are financing spending from rising incomes rather than new debt.

Moreover, fiscal policy is set to be less of a drag on growth, as much of the heavy lifting to put national finances on a healthier path after the financial crisis has been completed. Budget deficits of all 19 euro area member states should hover around three percent in 2019. As such, France, Spain, Italy, and Germany are modestly easing fiscal policy.

Unemployment is at cyclical low of 7.9 percent, with some one million jobs created in 2018, according to RBC Capital Markets, despite slow growth. Wages are climbing and inflation is topping off; both bode well for households’ real incomes. Banks’ lending to the private sector continues to gradually strengthen at a time when capacity utilisation is at a multiyear high. 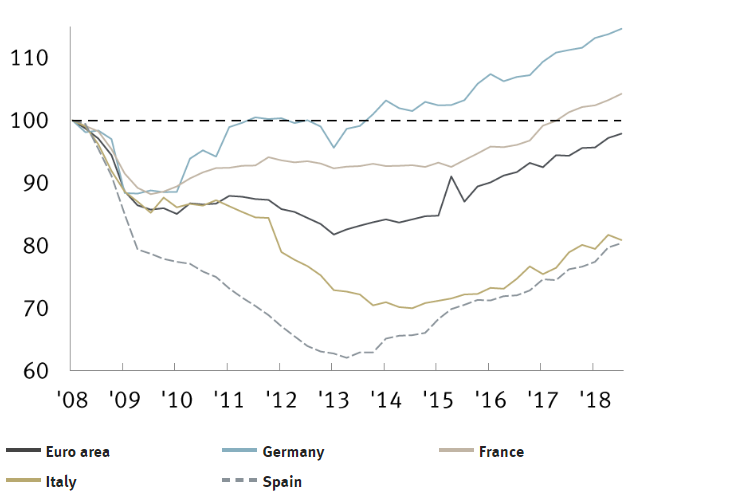 Investment growth is picking up.

Finally, the European Central Bank (ECB) has acknowledged the weakened economic backdrop, and RBC Capital Markets expects it to consider a new round of targeted longer-term refinancing operations (TLTRO), an inexpensive loan scheme for European banks, at its March meeting. Market expectations of a first rate hike have been pushed back to early 2020.

Several risks could derail this benign scenario. The U.S.-China trade war could boil over and a destabilising “no-deal” Brexit is a possibility, but both of these are unlikely to materialise, in our view.

More concerning is a potential end of the U.S.-EU trade truce. A U.S. Department of Commerce report recently concluded EU car and car part imports pose a risk to U.S. national security. U.S. President Donald Trump could threaten the EU with 25 percent car import tariffs. Beyond the noise, with both sides having much to lose from a growing conflict and with not much appetite in the U.S. for a trade war with the EU, unlike the case against China, we would expect these tensions to eventually ease. Finally, looking at the long term, Italy remains the eurozone’s weakest link. The country may well muddle through until the next European recession, but further reforms are imperative, in our view.

Will politics play the spoiler?

It is noteworthy that public support for the euro across the continent has increased over the past two years, probably thanks to soul-searching caused by the Brexit saga and to the trade war-induced unravelling of the established world order.

Regardless of the outcome, changes at the top do not necessarily mean a shift in policies. EU decisions are made by the European Parliament in conjunction with the European Council, itself made up of national leaders who are mostly pro-EU. Compared to the U.S. or China where one personality sets the tone for an entire political cycle, changes at the helm of the EU are less important, given it is a slow-moving organisation where major decisions require near consensus. If anything, more support for the EU may herald more cooperation in the reform effort.

Percentage of citizens supportive of the euro 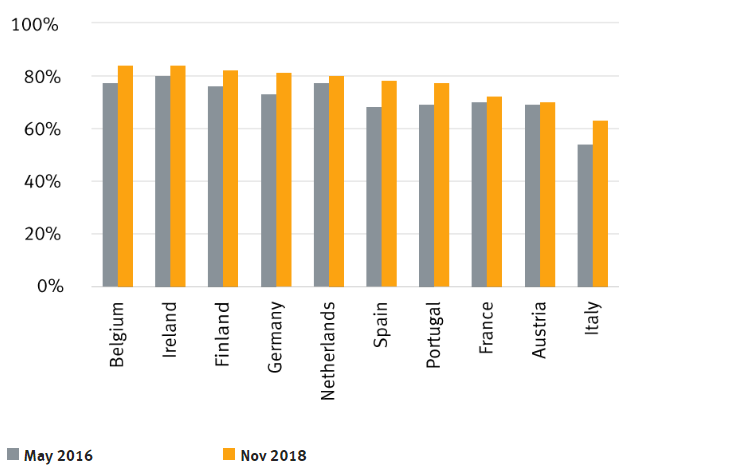 Support is stable or higher than before the Brexit referendum vote.

We maintain our Market Weight exposure to European equities. A more bullish stance would require the prospect of earnings upgrades. But those are difficult to see with consensus earnings growth for 2019 already penciled in to be a generous eight percent y/y, up from an estimated six percent for full-year 2018. With Q4 2018 earnings growth so far only in mid-single digits, a much steeper upswing in both the domestic and global economic background would be necessary to achieve current consensus 2019 estimates, in our view.

Despite potential earnings downgrades, valuations are not very demanding on 2019E and 2020E price-to-earnings multiples of 13.1x and 12.0x, respectively. On a 12-month forward basis, European stocks trade at a 15 percent discount to U.S. stocks, adjusted for sector weight differences.

We retain a bias to quality companies, particularly to exporters. Europe has a vast array of long-established companies with prestigious global brands, and a long, successful history of growing amid difficult environments. We find value in Health Care, Industrials that benefit from secular trends such as urbanisation and digitisation, and consumer-focused companies with leading market positions and strong brands.