As the delta variant spreads and U.S. inflation persists, how long can the growth cycle last?

As the COVID-19 delta variant spreads worldwide and inflation persists in the U.S., Kelly Bogdanova gets the thoughts of Eric Lascelles, RBC Global Asset  Management Inc.’s chief economist, about how the economy is coping and how long this growth cycle could last.

Kelly Bogdanova – Just when people thought the bulk of the COVID-19 risks had passed, the delta variant asserted itself. How is this impacting economic activity and your expectations of growth?

The pandemic would be well in hand by now if it wasn’t for the arrival of the more contagious delta strain. While only a few countries have significantly locked down in response and some nations even continue to ease restrictions—such as the UK—individuals and companies are behaving somewhat more cautiously as infections again rise. In turn, the economic recovery is decelerating from the enthusiastic clip that marked the first half of 2021.

The calculus is a tricky one for governments. The public tolerance for further lockdowns is low and the rollout of vaccines—despite an incomplete uptake—should keep hospitalizations and fatalities from spiking to the same extent as infections. A mix of vaccine passports and vaccine mandates are increasingly being used as a less damaging solution than blunt lockdowns.

China merits some attention in this next context. While it has successfully limited its exposure to the pandemic for well over a year and staged a remarkable recovery in so doing, the country’s zero-tolerance approach could prove costly in the face of the highly contagious delta variant. Australia, which has pursued a similar strategy, is now seemingly stuck in an endless cycle of harsh lockdowns. In turn, as pockets of China have recently been locked down, concerns are mounting about the implications for the global economy, commodities, and financial markets.

As we look to the year ahead, robust growth is likely to remain the order of the day. The U.S., eurozone, and Canada are set for nearly four percent growth, and the UK may grow closer to five percent in 2022. However, with a new drag from the delta variant, China potentially slowing, less natural buoyancy as economies approach normality, and the prospect of fading fiscal and monetary support, these forecasts have been downgraded moderately from the prior quarter, they budget for a further economic deceleration, and they are ultimately mildly below the consensus.

With growth set to soften, but remain above the long-term trend, one might expect the return on risk assets to remain mostly positive, but to be more muted than over the past year. 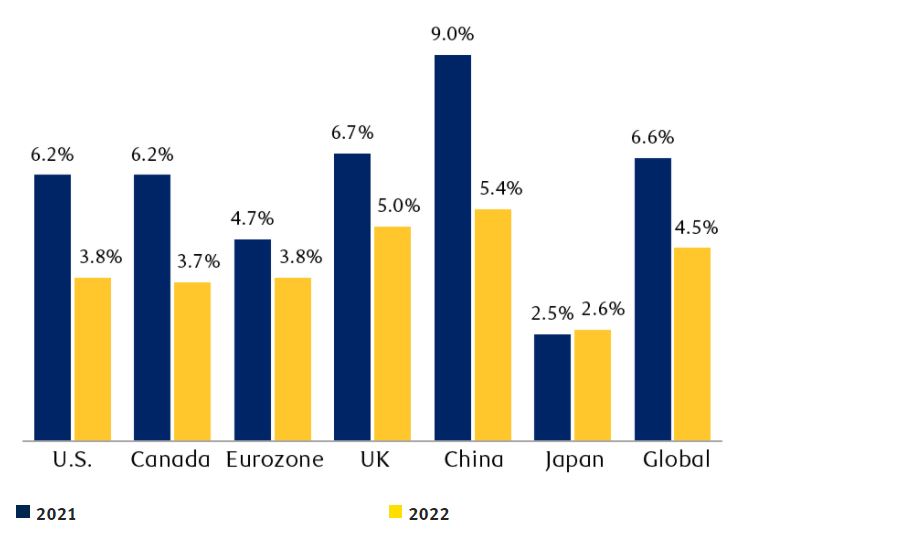 We often hear from American and Canadian business owners about challenges they are facing due to ongoing labour shortages. Some are hopeful the situation will improve either when school starts, which could prompt some people to actively start looking for work, or when COVID-19-related support payments are exhausted. What are your thoughts on the labour market?

The labour market is in the highly unusual situation of being extremely tight and extremely loose at the same time. Unemployment rates remain elevated, yet job openings are also high.

This appears to be a function of two things. First, demand has revived almost instantaneously as restrictions on the economy have been removed, but it takes longer for supply to be restored: it can be a lengthy process to hire workers, order inventory, and so on. We think this mismatch will take several quarters to resolve.

Second, the pandemic itself has motivated some workers to exit the workforce due to the fear of getting sick, the option of receiving government support payments, and/or insufficient childcare availability during school closures.

As schools reopen, government supports fade, and vaccines are administered, these concerns are fading and people are returning to the workforce. It is probably unrealistic to expect a large jump in the labour supply when schools start as research suggests that has been a comparatively minor constraint.

A torrent or a trickle

Let’s turn to a topic some forecasters are optimistic about—excess savings. Households are flush with cash due to lower spending levels throughout much of the pandemic and unprecedented, generous cash stimulus payments. Some economists argue that a good portion of this cash will be unleashed into the economic system as the pandemic wanes, supporting growth. Are they being too optimistic?

This is a big debate among forecasters. To what extent will households spend the excess savings they have accumulated during the pandemic? Whether economic growth over the remainder of this year and into 2022 is good versus spectacular will be determined in significant part by the answer. There are quite literally trillions of dollars at stake. That’s because excess household savings is very high as a proportion of GDP in many developed countries, particularly in the U.S., Canada, and the UK.

Households have built up considerable excess savings during COVID-19

Excess household savings during pandemic as percentage of GDP 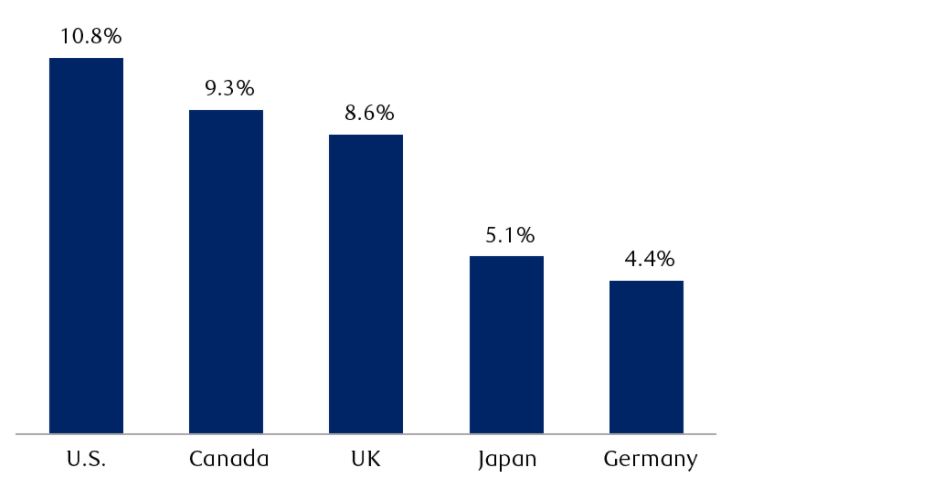 Source - RBC Global Asset Management, Macrobond; data as of March 2021 for all countries, except December 2020 data for Japan

The optimistic interpretation of this is that households will eventually release a torrent of cash, boosting the economic outlook. However, there is also a pessimistic interpretation. Our own view lands somewhere between the two extremes, but with more sympathy for the cautious view.

First, the longer households hold off from deploying their excess savings, even as the economy normalizes and restrictions fade, the more it argues they simply aren’t going to spend this money. Along these lines, keep in mind that excess savings aren’t just money sitting in a wallet or bank account. They also represent money that has been invested in financial markets or as a down payment on a home. Money deployed in that fashion doesn’t count as being “spent” since it remains part of the wealth of the household. But money deployed in these categories isn’t as readily available for discretionary purchases.

Second, historical precedent gives us pause. U.S. households also accrued significant excess household savings during World War II. After the war, families only spent about 20% of those excess savings, and it took a decade for that spending to fully occur. In contrast, some forecasts call for 20 percent or more of today’s excess savings to be spent over the next year. This may be overly optimistic.

Third, even if household savings were unleashed in 2022, much of it would probably be motivated by households filling a financial hole that formed due to the removal of fiscal stimulus. This would merely represent one source of funds making up for the withdrawal of another, so the economy wouldn’t necessarily be significantly ahead.

All of this is to say that there probably isn’t a multi-trillion dollar consumer spending explosion around the corner. However, households are undeniably in fine form given their extra savings and an extremely low financial obligations ratio. And even if they never spend those savings, the simple process of reverting to a more normal savings rate promises to redirect another 3.5 percentage points of income toward spending over time.

A durable, but shorter cycle

Now that the U.S. economy has roared back from the plunge in activity during the COVID-19 shutdowns and recession last year, and given that the economy seems to be coping with the delta variant, where are things headed in the coming years? How durable is this recovery?

Our best estimate remains that the U.S. economy is still at a relatively early stage of the business cycle. When we view the economic cycle in its six major stages—from the start of the cycle through to a recession—just over half of our indicators are signaling that we are in the early cycle phase.

That said, there is clear evidence of some incremental forward movement—or aging—of the business cycle. Compared to last quarter, the proportion of indicators in the start of cycle category has fallen sharply, which is understandable. Meanwhile, the mid cycle and late cycle categories have risen somewhat, though they remain well short of the early cycle claim.

The business cycle is progressing, but likely has longer to run 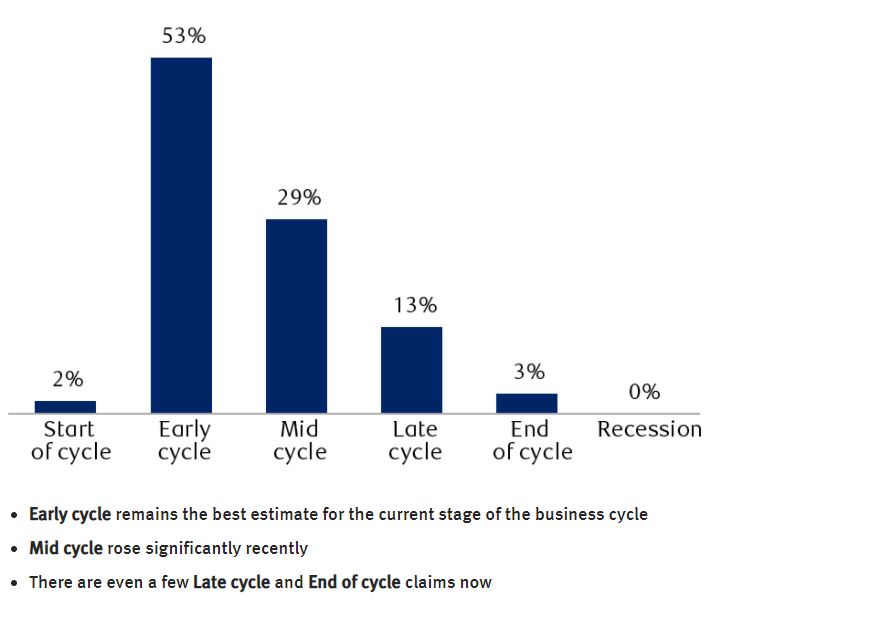 We concede that this particular business cycle may be shorter than the average cycle to the extent that the recovery has occurred very quickly. The duration of this cycle could end up being measured on the order of something like five years rather than the recent norm of approximately 10 years. But even if this shorter time frame plays out, there should still be a number of years to go.

Wall Street has been comforted that some U.S. inflation readings have slowed a bit, but for most Americans and many Canadians inflation continues to be a concern. There are higher prices at grocery stores, restaurants, and for gasoline and travel, and big-ticket items such as automobiles. So far, the Federal Reserve is taking all of this in stride, asserting that price pressures will be “transitory.” How long do you think this inflation bout will last?

High inflation has been challenging for everyone. We believe the peak is at hand and inflation should cool somewhat into 2022. Several recent developments support this assertion.

The prices of a number of key commodities look like they’ve peaked recently, and some have begun to notably retreat. Lumber prices are off sharply and oil prices have dropped. The Chinese government continues to do what it can to limit the advance of commodity prices, if mainly by discouraging further speculation. Commodity prices were a key driver of the initial inflation boom, and could be a key source of its end.

Prices of U.S. manufacturing components have finally ebbed, falling from a very high level. In July, they recorded the first significant drop since April 2020.

Shipping costs greatly increased during the pandemic. While there is only the hazy outline of a peak visible so far, industry experts believe most of the distortions should be drummed out of the system by mid-2022. This should ease price pressures across a wide range of goods.

Shipping costs have soared during the pandemic 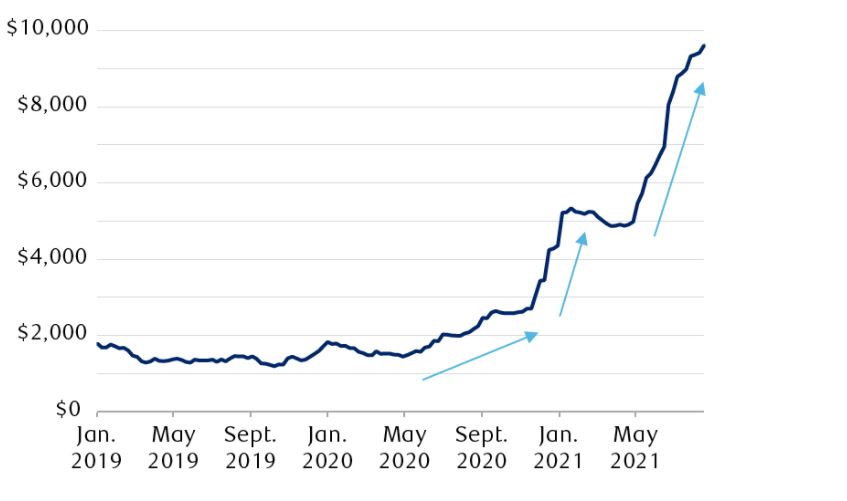 It remains notable that U.S. inflation is significantly higher than in other developed countries. Yes, the U.S. has a weaker currency and a stronger economy, but the difference is still extreme and probably unsustainable given the global nature of many of the underlying inflationary forces.

While inflation is set to become less intense, we nevertheless expect it to remain modestly above normal over the next few years. Even as pandemic-era supply constraints ease, central banks have printed a great deal of money, economies may even be overheating slightly by the end of next year, and the Federal Reserve has indicated it will tolerate a slight inflation overshoot. Our official inflation forecasts are somewhat higher than the consensus forecasts.

Eventually, inflation should return to more normal readings, with the risk it even undershoots central bank targets given the deflationary influence of aging populations.