The Federal Reserve made no significant policy moves in its December meeting. Instead, the Fed’s policy statement emphasized the semi-permanent nature of existing accommodation, saying that “substantial further progress” on employment and inflation creation was required before monetary support could be withdrawn. In particular, the central bank plans to continue buying at least $120 billion of Treasury and Agency bonds per month and expects to hold rates near zero through at least 2023.

Not just one recovery, but several

Investors looking at near-record levels in equity and bond indexes may wonder why the Fed is emphasizing the need for substantial additional progress, or why there is even discussion of bringing bond yields lower now that the vaccine has arrived.

The answer lies in the uneven nature of the recovery and the near-crisis levels that are still impacting large swaths of the economy.

Looking at the nationwide unemployment rate, the data shows a rapid—and faster-than-initially expected—drop from 14.7 percent in April to the current 6.7 percent. But that aggregation masks a very different job picture for low- and higher-wage workers. Paycheck and time card data, for instance, show that since January, there has been a small net employment increase for workers making at least $60,000/year; at the other end of the scale, workers making less than $27,000/year—who represent nearly 40 percent of the U.S. labor force—continue to suffer a near 20 percent drop in employment. 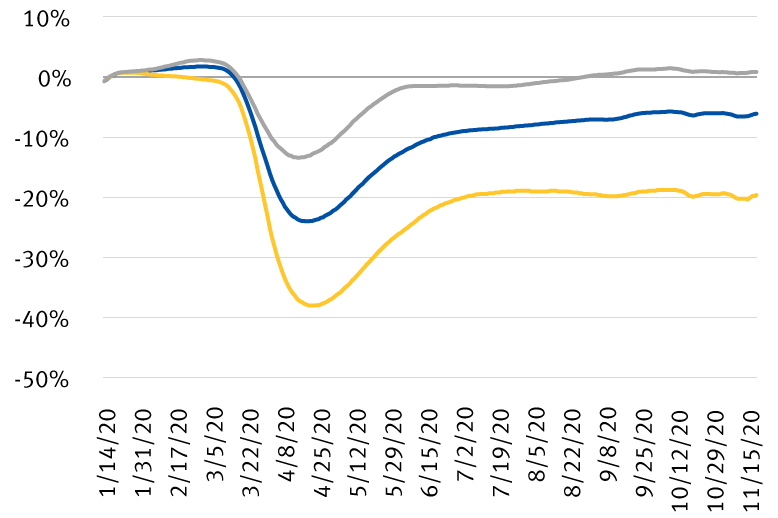 For companies, there is a similar split in conditions when it comes to financing availability. 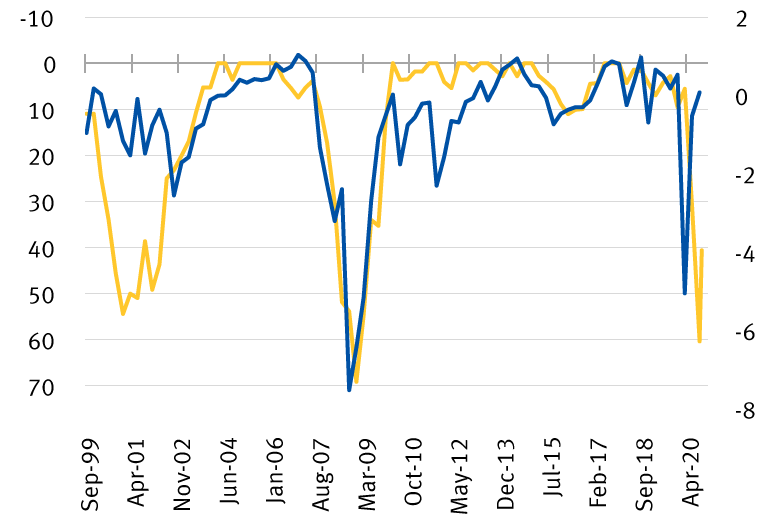 The Financial Conditions Index, a composite of public market indicators, demonstrates the rapid improvement in financial terms for large companies with access to markets. Bond markets are setting records for issuance amounts and coupon levels across the credit spectrum.

For businesses that rely primarily on bank financing, however, the picture is reversed, with the last reported data showing that as recently as October, 40 percent of banks were tightening borrowing standards.

These fault lines in the recovery go a long way to explaining the apparent contradiction between the Fed’s insistence on the need for further substantial improvement in the economy and its failure to announce any policy initiatives. The tools it has are ill-suited to addressing individual business loan decisions by banks or to providing direct economic relief to unemployed workers. What the Fed can do—improve market financing conditions—it has done, but that is not a panacea.

We believe that despite inaction at this policy meeting, the Fed will eventually modify its Treasury purchase program to emphasize longer-maturity bonds, most likely in an attempt to help offset upward rates pressure as the recovery accelerates in the second half of 2021. If, on the other hand, there were a step back in the recovery, we would expect the Fed to increase the dollar amount of its purchases.

While the Fed deferred action this week, congressional negotiators may have finally reached a compromise on a fiscal spending package for COVID-19 relief. As of this writing, there is no official deal, but the contours are coming into view: a one-time stimulus check for all Americans; a continuation of some or all of the existing federal unemployment benefits; funding for vaccine distribution; and additional targeted funding. The total package is likely to be less than the $908 billion of the original bipartisan proposal, as it appears negotiators have agreed to defer discussion of both federal limits on COVID-19 litigation and $165 billion of aid to states and municipalities, according to a Bloomberg report.

Although recent public comments are optimistic, Congress has engaged in sporadic negotiations on stimulus for months without success and the current deal optimism may prove misplaced.

Forest for the trees

Fiscal stimulus would certainly be of near-term benefit to the economy, but even without new legislation, we believe it’s critical for investors to focus on the powerful tailwinds supporting markets: