With his first 100 days as president now officially in the books, we’re starting to see Joe Biden leave his mark on the U.S. political agenda.

On one hand, with a nod to the obstacles he faces in the Senate, Biden has turned to a record number of executive orders to influence directive. These include targeted measures on climate change and actions to control the pandemic. In addition, the Biden administration has leveraged its political backing into stimulus measures aimed at boosting the economy, creating jobs and helping Americans return to work. These include:

Of course, these increased spending measures lead to the inevitable question of how they will be funded. To this end, the Biden administration has proposed several tax increases. Notable items include:

Amidst ongoing political jockeying, we still don’t know what the final word will be. Tax increases seem fairly likely, though not guaranteed. The Democratic majority is razor-thin in the Senate and not exactly huge in the House of Representatives. As such, some of the proposed tax increases are likely to be watered down.

Taxes and the markets

With this lingering tax uncertainty, it’s easy to see how a potential increase in corporate taxes–and subsequent reduction in the share of earnings available to shareholders–could be a negative development for the stock market. Yet, the complexities of financial markets make it difficult to draw such linear conclusions. 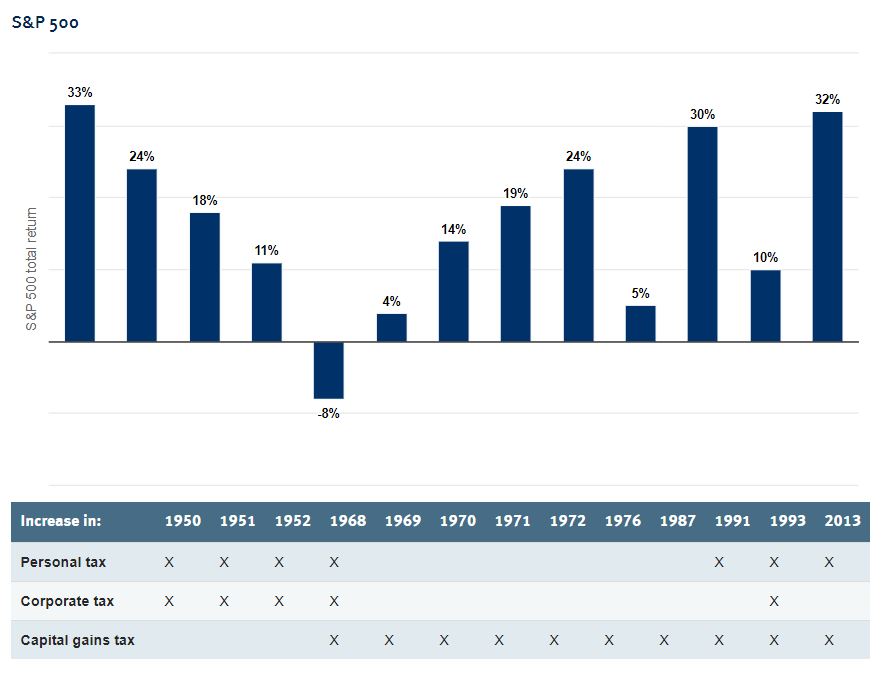 Source: Macrobond, RBC GAM. Data as of Dec. 31, 2020. S&P 500 TR Index (USD). An investment cannot be made directly into an index. The graph does not reflect transaction costs, investment management fees or taxes. If such costs and fees were reflected, returns would be lower. Past performance is not a guarantee of future results.

We recognize that valuations in pockets of the U.S. equity market are demanding. Undoubtedly, strong profit growth will be required to support these prices. However, for those concerned that a potential increase in corporate taxes will be the straw that breaks the camel’s back, history provides a compelling counter-argument. Rather than focusing on any one policy item, it’s important for investors to have a plan in place that they can stick with in the long run. Taxes et al.

In the face of climate change, RBC is stepping up to help through a program called RBC Tech for Nature.