As the impacts of the global pandemic continue to reverberate and geopolitical tensions erupt in the heart of Europe, economies around the world are facing unprecedented inflation pressure. Global Portfolio Advisory Committee co-chair Jim Allworth recently sat down with Eric Lascelles, chief economist for RBC Global Asset Management Inc., to discuss how we got here, as well as what investors could expect from the second half of the year and beyond.

Jim Allworth – Eric, let’s start with an update on the trajectory you see for inflation over the remainder of this year and beyond.

Eric Lascelles – The surge in inflation over the past several months was not a complete surprise to us. Last year, we had forecast a big run-up in the first half of 2022. That said, the levels reached have been above the 5%–7% peak we had initially expected. This is because the war in Ukraine now compounds the inflationary pressures that were already coming from pandemic-related distortions.

Both of these factors are hard to analyse through the lens of conventional economics. Normally you’d ask: “How overheated is the economy?” The answer would be that it has regained all the ground lost in the recession, and has used up most of its excess capacity. As such, it makes sense that inflation is higher than normal. But this degree of overheating should boost inflation by no more than 1%–1.5%, not four times that. 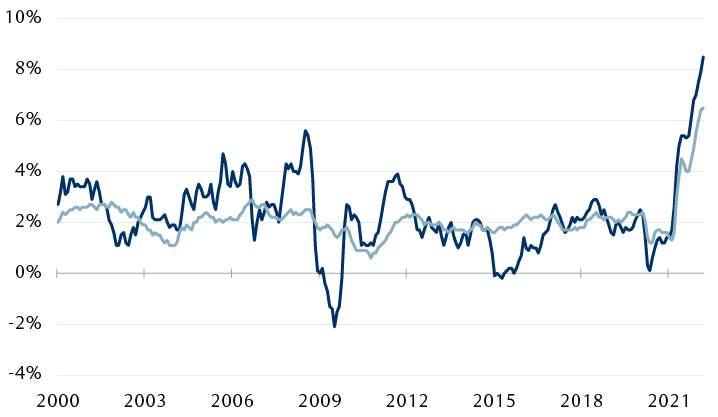 The line chart shows two measures of U.S. consumer inflation, the Consumer Price Index (CPI) and the Core CPI (which excludes food and energy), monthly from January 2000 through March 2022. Before the beginning of the COVID-19 pandemic, both were relatively tame, except for a spike in the CPI to almost 6% and a plunge to about -2.0% during the great financial crisis in 2008 and 2009. During COVID-19, both inflation measures surged, and have accelerated more recently. In March 2022, the CPI reached 8.5% and the Core CPI climbed to 6.5%, well beyond the levels of the past 22 years. The CPI rate reached a 40-year high.

So, there are other explanations. One is the dramatic change in spending patterns on the part of consumers. With many services unavailable due to the pandemic and incomes supported by fiscal measures, consumer spending pivoted sharply toward spending on goods. For many categories of goods, this quickly exhausted supplies on hand, producing shortages—think of what the shortage of computer chips did to auto production. The attempt to boost production to meet the very high level of demand exacerbated production bottlenecks and overwhelmed shipping infrastructure already stressed by draconian lockdowns in China. Higher prices have been the result.

Another factor has been the big run-up in commodity prices, which has added a significant extra leg to inflation. Commodity shortages induced by Russian sanctions have only served to intensify this pressure.

There is another factor that is less widely appreciated. As aggregate spending surged into the goods side of the economy, producing elevated price hikes, one might have expected the weak side of the economy—services—to deliver some offsetting deflation. But that didn’t happen. Service businesses don’t usually have unsold inventory on the shelf that needs to be discounted to be cleared. Their principal cost is wages, which tend to be resistant to downward pressures.

That gives us an idea of how we got here. One question would be, how long does inflation remain elevated?

A growing number of observers are saying that inflation has peaked. In our view, if it hasn’t, we expect it will within a month or two. There are several reasons to expect the rate of inflation to ebb somewhat from here. There are tentative signs that spending is indeed shifting toward services and away from goods. The latest retail sales data, when the effect of higher gasoline prices is taken out, reveal a decline in real spending on other goods. At the same time, hotel traffic is up sharply, as are some other services markers.

U.S. consumer spending on goods and services has begun to reverse

Personal consumption expenditure on goods and services (% of total) 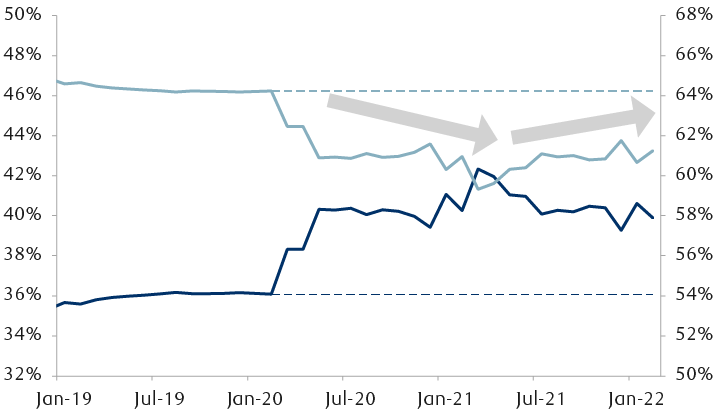 Supply chain issues, while likely to be around for some time yet, have begun to ease. There are fewer ships waiting at major American ports, and shipping costs have come down somewhat. Manufacturers are reporting slightly less angst about these issues.

Commodity factors have added an additional leg upward to price pressures, exacerbated by the war in Ukraine, and it’s hard to see those dislocations ending any time soon. But it is also unlikely that commodity prices will rise anywhere near as rapidly in the coming year as they have in the past 12 months. And that slowdown is all you need to expect a slower rate of year-over-year inflation from this source.

So, we expect inflation rates will recede somewhat over the second half of the year, but we will in all likelihood still finish the year well above a desirable level. Most of the improvement should come from the goods side of the economy as demand pivots elsewhere.

Some manufacturing indicators look to be corroborating this shift. The New Orders component of the ISM Manufacturing PMI data was very strong from the summer of 2020 through all of 2021. But recently it has weakened, dropping sharply below the elevated range that had contained it for more than 18 months. On the other side of the coin, the Inventories-on-hand sub-index has abruptly moved higher. So it’s not unreasonable to expect some price weakness on the goods side over the remainder of the year, and perhaps longer.

But there are at least two reasons why the overall inflation rate is unlikely to come down to the same degree, in our view. One is that the prices of some services are going to go up. As demand for travel and dining out surges higher, so will the prices of airline tickets, hotel rooms, and restaurant meals. That’s especially likely as those industries have been the most acutely affected by the much-discussed labour shortages. Several airlines have recently announced cutbacks to their summer flight schedules due to shortages of staff—notably, pilots. Fewer seats available likely means higher prices.

The other factor is rising wages as workers try to gain back ground lost to the big inflation increase already in place. The tight labour market makes such wage gains almost certain, and companies will try to pass those higher costs on to the consumer. 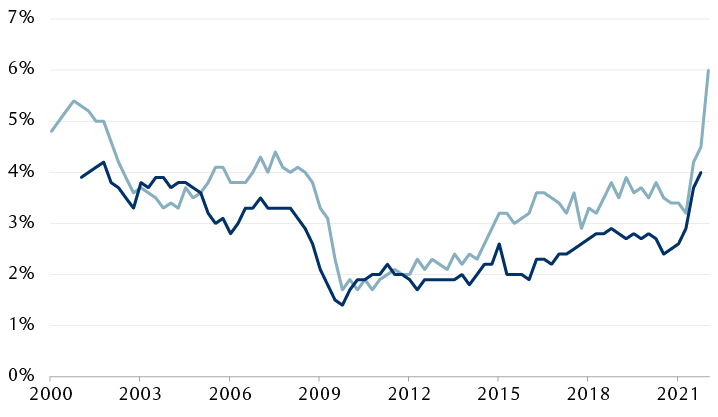 The line chart shows the year-over-year percentage change, over roughly the past 20 years, in two measures of U.S. wage inflation: the Atlanta Fed Wage Growth Tracker and the Employment Cost Index. These measures rose by roughly 5% and 4%, respectively, in 2000/2001. The rates of increase subsequently drifted lower, to under 2% during the global financial crisis in 2009, and then remained generally stable until 2014. The rate of increase then trended somewhat higher until the COVID-19 crisis began. In 2021, both began to rise more steeply. By the end of 2021 (the most recent data point), the Employment Cost Index rose by 4.0%. In March 2022, the Atlanta Fed Tracker rose by 6.0%.

So, while the inflation rate should ease back from today’s peak levels, it is likely to remain uncomfortably high at year’s end. But we do expect further improvement through 2023 as the supply chain issues are resolved, the demand for services normalises, and the extreme labour market tightness eases somewhat.

If you were to look back at our inflation forecast of early last year, and compare it with what has already transpired and where we forecast things are headed, I think it would be fair to say that the shape of the inflation trajectory and its inflection points have not changed. But the peak rate turned out to be higher than we expected, and the road back to an acceptable long-term inflation rate will probably be more gradual and take longer to play out, largely because of things that have happened recently—notably the Ukraine war and the renewed lockdowns in China.

Does this mean the Fed will have to tighten further, and for longer?

We think the answer is yes. Just a few months ago, the Fed was still indicating a willingness to act in a deliberate and measured way. That comparatively calm environment has been quickly left behind and replaced by one where “urgency” is the watchword. Markets are now pricing in several aggressive back-to-back rate increases followed by more moderate hikes into 2023.

For our part, we expect both the Fed’s and the market’s urgency will diminish somewhat in the second half. By year’s end, in addition to an ebbing inflation rate, policymakers will likely be looking at much slower GDP growth, an entrenched slowdown in the goods-producing side of the economy, and rapidly diminishing tailwinds on the services side. The pace of any tightening beyond that point is likely to be commensurately slow.

Beyond 2023, we look for inflation to continue to move closer to the Fed’s 2% target—though after a decade of running stubbornly below that level, it may well linger modestly above target for an extended stretch.

Eric Lascelles is the chief economist for RBC Global Asset Management Inc., where he maintains the firm’s global economic forecast and advises its portfolio managers on key themes and risks. Lascelles is also a member of the RBC Investment Strategy Committee, which is responsible for the firm’s global asset mix recommendations.

Is the market overreacting to the inverted yield curve?

We believe the market’s concerns have gotten ahead of the data and the economics. Not all curves are created equal and the real picture looks different.

Equity markets are facing a perfect storm of challenges

This unique period’s headwinds are flummoxing investors. Ironically, when sentiment decidedly sours, that’s usually not the time to give up on the market.