Financials have sprinted higher since late last year when the first vaccine was approved in the U.S., which prompted optimism about the eventual economic recovery—one that is now unfolding.

This equity sector has significantly outperformed the overall market, surging 38 percent since early November 2020, double the S&P 500’s gain of 19 percent and outpacing all other sectors (excluding Energy).

Is there further to go? We think so.

Certainly the recent run has been eye-popping. But some additional context is useful. Actually, the sector’s performance has yet to catch up to the S&P 500 going back to just before the COVID-19 earthquake hit.

S&P 500 performance vs. Financials and other key categories

Note: The Value and Growth categories are measured by the S&P 500 Value and S&P 500 Growth indexes.

Financials are still trailing the S&P 500, with a gain of 21 percent for the former and 31 percent for the latter, since the beginning of 2020—a time frame that takes into account the severe selloff during the worst stage of the COVID-19 pandemic over a year ago.

We think there is more catch-up room ahead for U.S. Financials because of numerous catalysts.

A number of the sector’s tailwinds are related to the early stage of the economic recovery, while others are due to the overall sturdy nature of banking operations in the U.S. and some breathing room on the regulatory front.

We think the following potential catalysts should push the Financials sector higher:

Early-cycle impulses: Financials tend to outperform in the early part of the economic recovery cycle, along with the overall value/cyclicals category, of which the sector is a component. The market rally associated with this stage typically has two phases—first, a sprint out of the gate (which has already occurred, but could continue), and then a consolidation period or pullback followed by a renewed rally that transpires at a slower pace (the second leg of the rally). Historically, the Financials sector has not only outperformed the S&P 500 during the sprint out of the gate but also outperformed during the second leg of the rally, according to a study by RBC Capital Markets, LLC’s Head of U.S. Equity Strategy Lori Calvasina.

A beneficiary of inflation: When the public perceives that inflation will increase, Energy, Materials, and Financials tend to outperform the most, according to Calvasina’s data going back to 2004, which is shown in a chart toward the end of this “Inflation aftershock” article. We think the buoyant May inflation data that was just released, with the Consumer Price Index jumping five percent from last year, is supportive of this catalyst.

The potential to hike dividends: The banking analyst at our national research correspondent anticipates “substantial dividend increases,” including roughly 20 percent hikes for some of the largest institutions, and rising dividend payout ratios over the next 18 months. While the regulatory environment for banks is still tighter than it was before the global financial crisis in 2008–09—and will likely remain so—there has been some easing in requirements, and industry analysts anticipate the allowance of further dividend increases. This aforementioned analyst and RBC Capital Markets, LLC’s Head of U.S. Bank Equity Strategy Gerard Cassidy anticipate some movement on the dividend front following the release of the Federal Reserve’s Comprehensive Capital Analysis and Review (CCAR) of the banking industry, scheduled for June 24.

Fund flows firing: Strong inflows of cash have poured into Financials sector exchange-traded funds (ETFs), outpacing all other sectors in absolute dollar amounts so far this year, and edging out all other sectors as a proportion of assets under management in the past 12 months. We think the Financials sector’s recent outperformance will further boost inflows from a category of ETFs that has become popular—“momentum” funds. These securities include stocks that have experienced strong price gains and earnings trends, typically over the previous 12 months. For a long time Financials barely had been represented in momentum funds due to the sector’s previous underperformance; instead, these funds were dominated by technology-related stocks. But now we think that is set to change as momentum ETFs rebalance over time to include stocks that have performed well more recently.

Better profitability due to yield curve dynamics: While we don’t foresee dramatic moves in Treasury yields over the near term, our fixed income strategists anticipate further modest steepening of the Treasury yield curve, as the 10-year yield drifts somewhat higher toward two percent by year end and short-term rates stay anchored as the Fed keeps its target rate near zero percent. Cassidy believes this will lead to higher net interest margins and net interest revenues for banks.

Improved loan growth and less excess liquidity: Abundant stimulus from the Fed and Washington has held back banks’ profitability, but that should change. In a mid-May report Cassidy wrote, “Monetary and fiscal policy over the last 12+ months has led to double-digit deposit growth and has resulted in many banks having excess liquidity on their balance sheets. Loan-to-deposit ratios have plummeted, and bank profitability has been hurt as a result. Over the next 12–18 months, we expect this trend to ease-up as loan growth picks up, deficit spending falls, and the Federal Reserve’s Quantitative Easing (QE) program comes to an end.”

Earnings momentum and then some: Financials are expected to deliver stronger earnings growth than the S&P 500 in 2021, 45.5 percent versus 33.4 percent year over year, as the chart shows. We believe there is upside to the 2021 forecast and, importantly, Cassidy anticipates that 2022 consensus estimates for banks have room to push higher. We don’t think this is fully factored into current stock prices.

Financials are expected to outpace the S&P 500 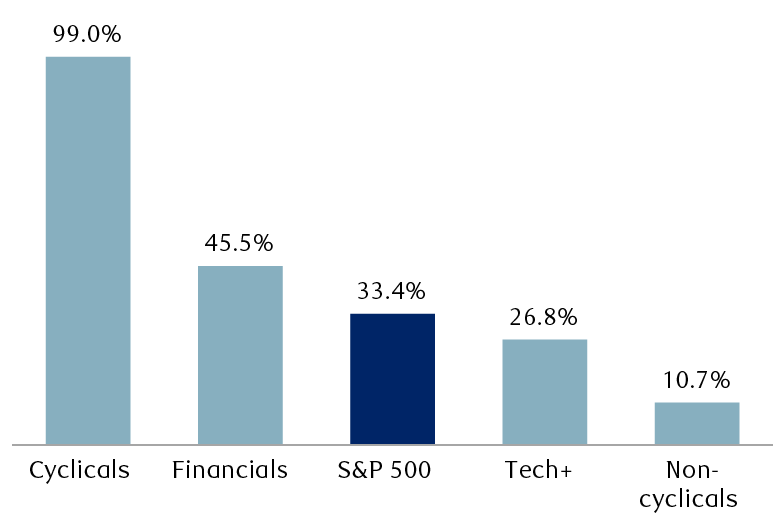 While the U.S. Financials sector has come a long way since late last year’s initial vaccine approval, we think it has room to run due to a full tank of catalysts, which should play out over the course of the next six months and longer. We would stay Overweight U.S. Financials. We also continue to favor this sector in other markets such as Canada, the UK, and Europe as similar economic dynamics are at play.

Beyond financial statements: What makes a company sustainably successful?

We discuss how ESG factors can be a driver of investment value.