Bond-market investors often like to portray themselves as the trail bosses of financial markets, riding herd on profligate politicians. This narrative is often punctuated with references to “bond vigilantes,” a term coined in the late 1980s to describe the role of the Treasury market in containing government spending, and a nod to James Carville’s famous wish that he be reincarnated as the bond market because then “[I] can intimidate everybody.”

The truth, of course, is much less heroic. Bond markets in 2017 easily funded an Argentine century bond—a 100-year obligation from a country that had defaulted eight times since independence and had not gone thirty years without defaulting since 1950. In 2020, Argentina experienced its ninth default and instead of a century, the bond survived only three years. This lack of effective oversight has not been confined to emerging markets; global investors have been willing to lend the U.S. government money at ever-lower interest rates even as total debt rose, culminating in investors holding claims of roughly $23 trillion at yields below two percent. Fed policy, not debt levels, is what pushed yields higher. 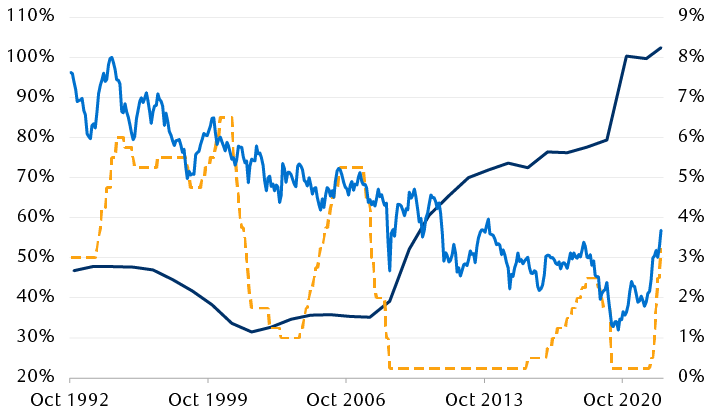 Line chart showing publicly held U.S. government debt as a percentage of GDP, the Federal Reserve’s target interest rate, and the yield on the 30-year U.S. Treasury bond since October 1992. The chart shows a general uptrend in debt with total debt going from 35% of GDP to over 100% of GDP between 2007 and 2020. During that same time, both the bond yield and the target rate declined from almost 5% to nearly 2% and 0% respectively. The rise in bond yields in 2022 coincided with a rise in the target interest rate.

The myth of the bond vigilante has been dusted off following recent events in the United Kingdom. The British pound dropped five percent against the U.S. dollar in the days after the incoming UK government unveiled an updated budget heavy with tax cuts and additional spending. Yields on British government 10-year bonds increased by over one percentage point in three trading sessions, prompting the Bank of England to step in to stabilize the market. These dislocations—which impacted bond prices globally—have prompted press commentary on the potential for a similar move in the U.S. Treasury market. 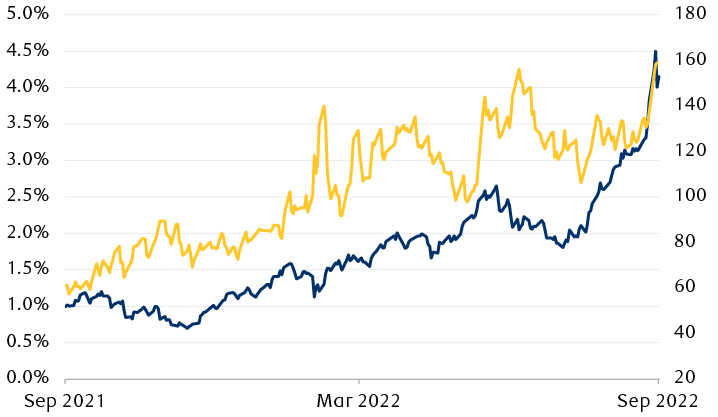 We believe there is little near-term risk that bond investors will meaningfully constrain U.S. government spending. Instead, we expect bond markets will maintain the permissive attitude toward the U.S. that has characterized the past 30 years, guided by the ongoing—and potentially growing—demand for dollar reserves and the enhanced role of the Federal Reserve in the Treasury market.

Bonds are the tail, currency is the dog

Far from being the market that runs the world, bonds are in many ways a sideshow to currency markets. In 2019, an average of $600 billion worth of Treasuries changed hands every day—a respectable amount, certainly, but far short of the nearly 5.8 trillion U.S. dollars traded daily in global foreign exchange markets.

The U.S. dollar is ubiquitous in international finance. It dominates trade, with essentially all commodities and nearly 40 percent of overall international commercial transactions settled in dollars, according to the International Monetary Fund (IMF). Not coincidentally, the vast majority of central banks choose to hold at least part of their international reserves in dollars, given its proven acceptability to sellers of oil, food, and other critical inputs.

But central bankers—as well as large institutions and corporations that maintain dollar safety reserves—need a place to stash their greenbacks. Commercial banks are not an option, because reserves are designed to be a safety net in a crisis, and even large banks carry credit risk. Instead, these institutions look to U.S. Treasury bonds, which are ultimately backed by the ability to tax the world’s largest economy. Just as importantly, even long-maturity Treasuries are easily converted to ready money, and U.S. government securities have historically appreciated during crisis periods as global investors shift their focus from the return on capital to the return of capital.

This means the appetite for U.S. dollar reserves creates a concurrent demand for U.S. Treasury bonds that can become self-fulfilling. Many investors think the U.S. government creates a budget of needed projects, subtracts tax revenues, and then taps bond markets to fund the difference; to some extent, that’s true. But the funding mechanism is a two-way street. Reserve holders, anxious to hold U.S. government obligations, buy up available bonds, pushing yields lower and allowing the U.S. to fund an ever-expanding list of projects.

This effect is not small. According to the IMF, more than $7 trillion in official reserves were held in dollars at the end of 2021, compared to roughly $23 trillion in outstanding U.S. Treasury debt. This means that roughly one-third of tradeable U.S. government debt is held not by potential vigilantes, but by policymakers locked into their holdings as a result of other policy choices. With the Fed holding a similar amount, the idea of market control over spending looks increasingly difficult to sustain.

The dollar is not going anywhere for now

We do not believe the dollar is at risk of losing its status as the world’s preferred reserve currency in the near future, in large part because no viable alternative is readily apparent. In fact, we believe that the global COVID-19 pandemic and the supply chain weaknesses it has exposed will likely increase demand for dollar reserves in the short term, adding additional price-insensitive bond buyers. Over time, reserves may migrate toward a basket of other currencies, but for now we believe reserve migration will be more than offset by larger reserve holdings across the supply chain.

Nor is the Fed likely to retreat from the bond market. Although the central bank has embarked on a process of reducing its holdings, it has established an ongoing presence in the Treasury market. Even the current balance sheet reduction program is designed to gradually slow and maintain a critical reserve of Treasury holdings on the Fed’s balance sheet.

Seeing the world as it is, not as it should be

It may be comforting to imagine living in the world of economics textbooks, where creditors carefully evaluate a country’s fiscal and monetary trajectories, and yield moves provide real-time collective feedback. In the real world, however, the Fed’s presence and the collective desire of institutions and individuals to hold dollars as a safety reserve means, for good or ill, that the U.S. faces little near-term risk of bond vigilantes taking control of the budget—or the yield curve.