The U.S. Federal Reserve struck a more hawkish note than markets expected at its June meeting, driving bond prices lower and yields higher across the Treasury curve. Although we share the view that the meeting is important in understanding future Fed policy moves, we would caution that the initial market reaction likely overstates the impact of the changing Fed projections and the language of the post-meeting statement.

In terms of policy, the central bank acted as expected, maintaining the current federal funds rate target range and the $120 billion monthly asset purchase program. At the same time, the members of the Federal Open Market Committee (FOMC)—the rate-setting group within the Fed—updated their individual economic projections for growth, inflation, and policy rates. The previous survey, in March, produced a median projection for rates at zero through the 2023 end of the forecast period; in this month’s report, however, the median projection includes two rate hikes in 2023, leading to a federal funds rate of 0.625 percent.

The Fed’s changing forecasts for the U.S. economy (%) 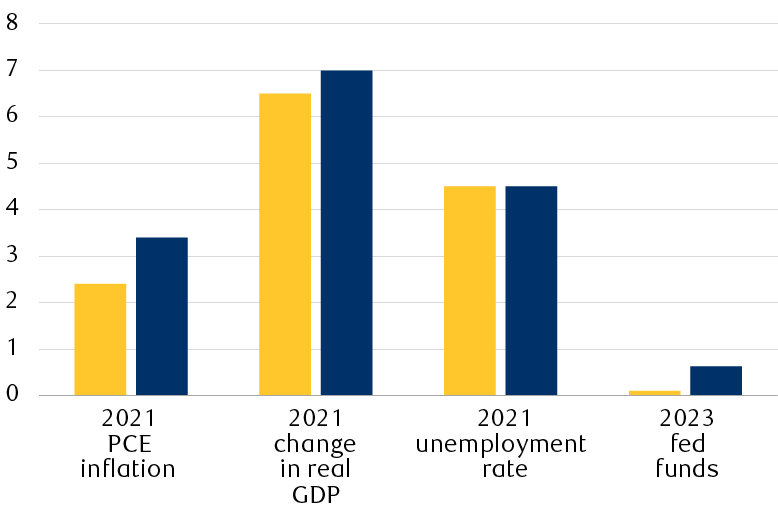 We think this change in the median forecast rate should carry little weight in investor thinking. Member projections are snapshots in time and do not represent a plan for future policy, a point Fed Chair Jerome Powell made during his post-meeting press conference. In addition, by 2023 the composition of the FOMC will have changed, with the rotating voting slots shifting to more dovish members. Prior Fed projections have not been particularly accurate predictors of policy rate changes, especially when dealing with minor rate differences years in the future.

The taper talk has begun

While the June meeting may not have provided a clear view of future rate hikes, we think the meeting did move the timeline on tapering, as the Fed acknowledged that discussions on reducing the pace of asset purchases will likely begin next month—a change from the central bank’s prior stance that it was too early even to talk about talking about tapering. Combined with the Fed’s earlier guidance that it would provide months of advance notice before implementation, we see tapering kicking off before year’s end, potentially in early fall. We continue to see tapering as a year-long process, and believe a potential rate hike is unlikely for at least 18 months—and probably longer.

An opportune moment to talk taper 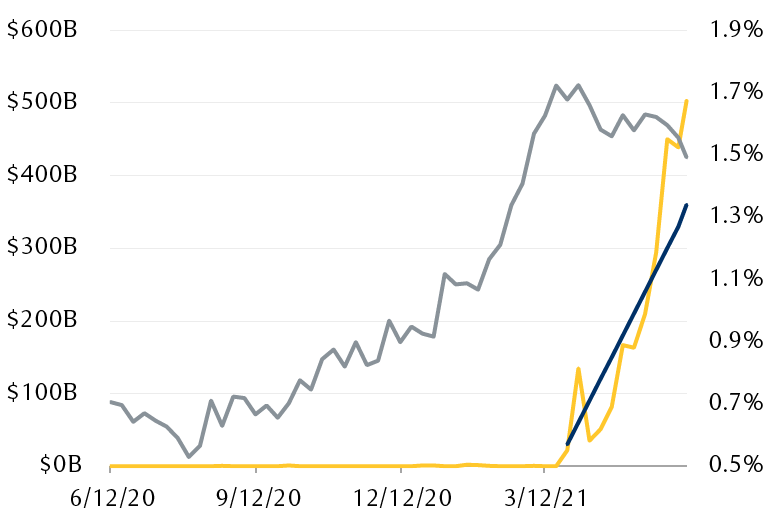 Market conditions—as well as inflation levels—likely contributed to the Fed’s decision to start moving toward tapering. The absolute level of yields was near a multi-month low heading into the week, reducing the impact of any shift higher in yields on the prospects for tapering. In addition, the potential for unforeseen liquidity consequences from tapering is limited, as investors in recent months have returned more cash to the Fed than the Fed has pumped into the system. Since March, the Fed has purchased approximately $360 billion of Treasury and Agency securities, while investors deposited over $490 billion into the Fed’s reverse-repurchase facility. Overall, it was an opportune moment to launch the taper process.

Inflation is transitory, except when it’s not

Beyond taper talk, one of the most notable shifts in Fed language concerned inflation. The Fed still maintains—correctly, in our view—that current inflation is likely to prove transitory; however, the central bank now acknowledges the possibility that inflation may be higher and more persistent than it expects. In addition to the qualitative shift, the FOMC’s median projection for 2021 PCE inflation jumped a full percentage point between March and June, rising to 3.4 percent from 2.4 percent.

One interpretation of the Fed’s more hawkish tone, consistent with its comments and projections on inflation, is that the central bank now views the likely 2021 inflation overshoot as sufficient to meet the requirements of its recently adopted average inflation policy. The details of that policy have always been vague, and the Fed may be looking to take advantage of that purposeful ambiguity.

While it’s easy to get caught up in the minutiae of Fed policy thinking, in practical terms not much has changed: the economy is still millions of jobs short of pre-pandemic employment levels; the ability of the Fed to sustainably generate sufficient inflation to overcome structural disinflation is questionable; and, even under optimistic assumptions, it will likely be years before policy rates move higher.

But we do see two key themes emerging from this month’s meeting. First, stay invested. Not even the Fed can time the market; between March and June, its view of future rates shifted 60 basis points (bps) higher while the yield on the 10-year Treasury dropped 15 bps. We see little reason to think investors are likely to do better, and sitting on cash earning zero percent while waiting for the perfect bond entry point is unlikely to be a profitable strategy.

Second, long-term investors should trust in diversification and asset allocation. Whether inflation is transitory, and how the Fed will respond if it is not, are important questions, but the range of possible outcomes is wide. We believe investors should seek an investment strategy adaptable to a broad range of scenarios; a diversified portfolio, rebalanced appropriately, is among the soundest methods of dealing with uncertainty.

While the pandemic has created unique challenges for policymakers and investors alike, it has also reinforced basic investment principles—including the importance of sound asset allocation, consistent with risk tolerances. In our view, investors would be well-served to focus on core principles and avoid hasty responses to minor changes in the timing of potential Fed policy adjustments.