Is record use of the Fed’s reverse repo facility a sign of market stress?

While some fear pressures are building under the surface, we see the drivers as rather mundane and expect conditions to normalize later this year.

The uptake in the Federal Reserve’s Overnight Reverse Repurchase Facility (RRP)—whereby the Fed takes excess cash out of the system by lending out securities it has on its balance sheet, which it then buys back the next day—has crossed the trillion-dollar threshold in recent weeks. And while the rise in usage of this facility was both anticipated and has been ongoing since March, when you get big numbers, the Fed, and the banking system involved, it does have a bit of a tendency to amplify investor fears.

And to be sure, those fears aren’t completely unfounded. There has been a stigma in the past associated with banks and others turning to the Fed’s various lending facilities as a potential sign of systemic stress, or of looming problems. But fortunately, that does not appear to be the case here.

At the Fed’s March policy meeting, officials were already preparing for the rise in RRP usage, as seen from the minutes of that meeting: “… market participants projected that reserves would grow at a historically rapid pace in coming months, reflecting continued expansion of the Federal Reserve’s balance sheet along with a projected drawdown in the balances maintained in the Treasury General Account.”

As the chart shows, that’s exactly what has happened, and is the simplest explanation of what is going on, in our view. The Treasury Department has been normalizing the level of cash in its general account from about $1.6 trillion at the beginning of the year, to around $300 billion, or what it roughly averaged prior to the pandemic. With the RRP facility usage jumping above $1 trillion, the Fed noted at its latest meeting in July that “The increase in [RRP] participation was driven in part by larger investments from money market funds, as ongoing reductions in net Treasury bill issuance contributed to downward pressure on yields of other investment options available to these funds.”

Trading places: As Treasury draws down cash and bill supply, investors find a new home at the Fed 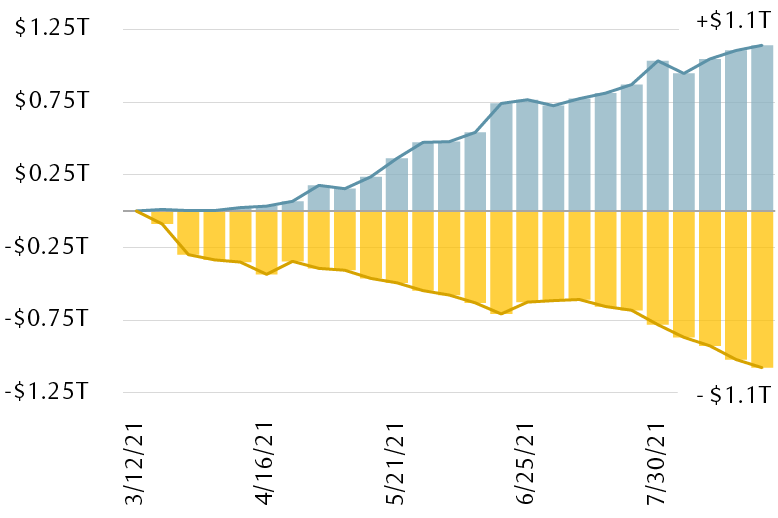 Too much cash chasing too few safe assets has put downward pressure on money market rates, causing the Fed to step in, and driving cash to the Fed’s RRP window.

At the same time that Treasury is cutting its cash level and the supply of outstanding Treasury bills, money flowing into money market funds has only increased. Money market fund assets stood at $4.5 trillion as of Aug. 18, up notably from pre-pandemic levels around $3.5 trillion.

So as money market funds, banks, and government-sponsored enterprises—all flush with cash—mosey down the street in search of safe assets to buy, they might first pop into the Treasury bill store, but the shelves are a bit bare for the aforementioned reasons, and anything that is left probably carries a yield of barely 0.03 percent due to all of the demand.

But you know who does have a lot of the stuff? The Fed. It’s been buying Treasuries at a pace of $80 billion each month for a while now, with total inventory on hand of more than $5 trillion, which would be the theoretical limit of the RRP facility uptake. So everyone runs across the street to the Fed’s storefront where the Fed shows off its wares of Treasury securities available to be lent out in repurchase agreements, and is more than eager to mop up the excess cash lying around each night.

This confluence of events broadly has put downward pressure on short-term rates, toward the bottom of the Fed’s current federal funds target range of zero percent to 0.25 percent. The effective fed funds rate was trading as low as 0.05 percent prior to June when Fed policymakers, a bit uncomfortable with rates around that level, made a technical adjustment in the RRP rate, which forms the floor for short-term rates, to 0.05 percent.

As the chart shows, that has boosted the effective fed funds rate back toward the midpoint of the Fed’s target range around 0.10 percent. It is also higher than zero percent, which has also caused other government-sponsored enterprises to shift their funds to the Fed’s RRP facility.

Fed’s efforts aimed at keeping rates within the target range 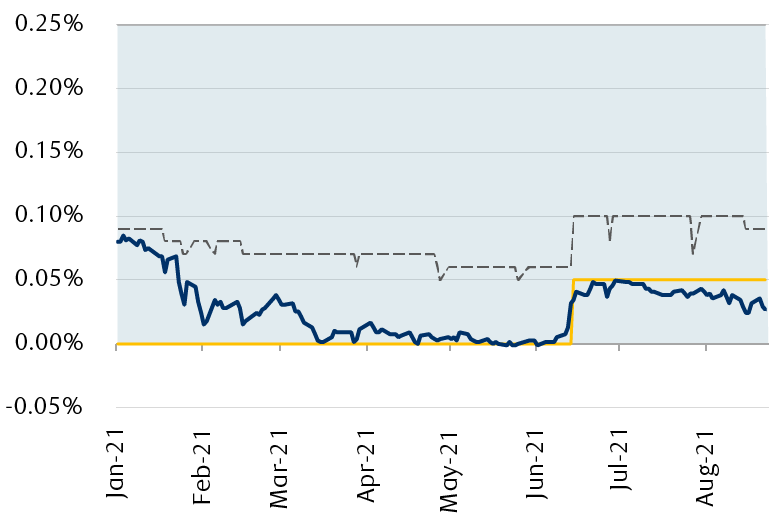 But not just anyone can shop at the Fed’s RRP window, and so, while the one-month Treasury bill yield initially rose on that adjustment, it has since slipped back to 0.03 percent. So for the time being, the Fed can offer more attractive rates than comparable options, which should keep RRP utilization elevated.

Road back to normal

The plumbing of the financial system can be a bit boring, as it should be, so if you’ve made it this far, what comes next?

We do expect an eventual return to normal … or at least to as normal as anything can be these days. Treasury is managing its cash balance and Treasury bill issuance around the debt ceiling, which is expected to be hit around Oct. 31 based on Congressional Budget Office projections, though our expectation is that the ceiling will be raised by then. From there, bill issuance will resume, while passage of the infrastructure bill and the budget would likely require a further increase in Treasury issuance, higher Treasury bill yields, and less need for the Fed’s RRP facility. The Fed’s eventual taper of asset purchases will likely also help to alleviate the issue.

While the use of the Fed’s lending facilities has reached levels previously unseen, we don’t view that as a sign of any type of systemic distress, and see little reason for investors to adjust portfolios or investment strategies as a result.

As the delta variant spreads and U.S. inflation persists, how long can the growth cycle last?

The U.S. infrastructure and budget bills, and what comes next

The infrastructure bill is near the finish line, while budget wrangling is on tap. As the legislation is debated, we look at the various scenarios.