Four events should set the tone for the U.S. equity market over the near term, in our view, and will likely determine whether the S&P 500’s next move will be to consolidate, bounce, or decline further. The upcoming events are:

As these key dates approach, U.S. recession risks have risen further in just the past week. We provide perspective on this below.

We also address the bigger question for investors: Is a recession already largely factored into the U.S. market, especially in light of the significant selloff of the past six months? With the major indexes down roughly 20 percent to 30 percent, we think much of the weakness is likely priced in. But there are a number of important caveats to consider, as this is a unique business cycle with no analogues.

Heightened recession risks are captured by the latest Atlanta Fed GDPNow estimate, which is pointing to a second straight quarter of negative U.S. GDP growth in Q2. (An important note: Two consecutive quarters of GDP declines is not the “official” definition of a recession according to the National Bureau of Economic Research [NBER], but it’s one that many market participants embrace. Therefore, should another negative GDP quarter transpire, we think press headlines would shout “recession” regardless of whether the state of the economy matches the official definition.)

The GDPNow model is currently forecasting a 1.9 percent decline in Q2 GDP, although this estimate is subject to change as more data arrive. This forecast deteriorated significantly late last week following negative revisions to Q2 consumer spending and private domestic investment data. We view GDPNow as a useful running estimate of U.S. GDP because it incorporates the most relevant data released thus far during the quarter.

Complicating matters, the Bloomberg consensus of Wall Street economists is forecasting 2.6 percent GDP growth in Q2—the opposite of what the Atlanta Fed’s model is signaling. The consensus estimate has been near this level since mid-May; we think some economists may be slow to update their forecasts despite the fact that rhetoric about the economy has become more pessimistic. We can’t remember such a wide gap between the GDPNow estimate and the consensus forecast.

There is an unusually wide gap between GDP forecasts 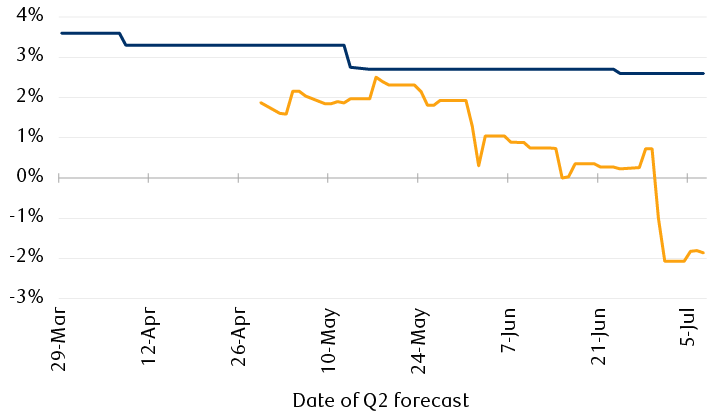 Line chart showing the evolution of Q2 2022 GDP forecasts. The Bloomberg consensus forecast of economists has drifted slightly lower, but remains in above-trend territory. On March 29, it was at 3.6% growth and since then has declined steadily to 2.6%. The Atlanta Fed's GDPNow forecast is very different. On April 29, the first time the forecast appeared for Q2, it was at 1.9% growth. But since then it has declined, including sharply in the past week. It recently plunged into negative territory and now stands at -1.9% growth.

What is our take on this mismatch and recession risks overall?

RBC Capital Markets, LLC Chief U.S. Economist Tom Porcelli points out there are indeed signs of material, broad-based economic slowing. He says this downturn will feel like a recession to most people, whether or not it is officially deemed one by the NBER. He does not believe the consumer segment will be spared; it represents the largest share of the economy. While Porcelli’s base case forecast is still for a mid-cycle slowdown similar to the one that occurred from 1994 to 1995—a painful period that felt like a recession but wasn’t accorded the official designation—he notes that an official recession is looking increasingly likely this cycle. If this turns out to be the case, Porcelli thinks it will be mild unless the Fed overtightens.

RBC Wealth Management’s U.S. recession scorecard, which tracks seven important leading indicators of recession, has recorded some deterioration in just the past week. The all-important yield curve indicator has shifted to the yellow zone along with another indicator, and the manufacturing indicator has flipped from yellow to red. As a group, the seven indicators are still not signaling acute risks that a recession is imminent, but the trend has shifted notably since early June. Recession risks are now higher than before, as our most recent recession scorecard report explains.

One size does not fit all

Regardless of whether a recession is already upon us, right around the corner, or could materialize within the next year or two, the bigger question for investors is: To what degree has the U.S. equity market already factored in a recession?

With the S&P 500 down almost 20 percent from its peak and some widely owned stocks within the index down much more, while the Nasdaq Composite and the small-cap Russell 2000 are both down almost 30 percent, we think much of the weakness has been priced in—as long as the Fed doesn’t slam on the brakes too hard by raising interest rates much higher than is warranted, and as long as inflation doesn’t linger at an elevated level for a long time.

An important point to consider when thinking about equity market behavior surrounding recessionary periods is that there is no single template—there is no “typical” recession, and there isn’t much that can be considered typical market behavior associated with them. This is illustrated by the table below and by other data:

Notes: The 1945 recession is excluded as there was no clear stock market pullback around it. *Surrounding the recession in March 2001 – Nov. 2001, the pullback statistics are based on a March 2000 peak and Oct. 2002 low; the market hit an initial low in Nov. 2001, which was retested and surpassed in 2002. **The market didn’t bottom until 10 months after the recession ended; this data is not included in the average calculated for this column.

The slew of important economic, corporate, and monetary policy events that will occur in the near term will likely determine the U.S. equity market’s next move, in our view.

If some of these events prove to be disappointing and recession probabilities rise further, we think there could be a longer bout of volatility and some more downside for equities.

Conversely, if the preponderance of news is at least “less bad” than it has been lately and signals that some of the worst aspects of the current down-cycle may be passing, the market could get a much-needed reprieve and even bounce noticeably over the near term.

For additional thoughts on the market’s potential path beyond the upcoming events—including a discussion of two specific scenarios tied to inflation and Fed policy—see the recent article on prospects for equity markets, part of our 2022 Midyear Outlook report.