The next generation to expand scope in an effort to diversify.

Despite U.S.-based indexes reaching new highs over the course of a multi-year bull run,1 U.S. investors’ mindset is becoming more global. According to a survey by The Economist Intelligence Unit (EIU), commissioned by RBC Wealth Management, the preference for domestic investing is less pronounced among younger Americans than older ones.2 The survey looked at various bands of high-net-worth individuals (HNWIs; respondents with at least US$1MM in investable assets), adult children of HNWIs, and those who are not HNWIs but who have a minimum income of US$100,000.3 It revealed a more diverse investment approach from the next generation, which could expand in scope and scale as successive generations acquire wealth. This is important because the priorities, aspirations and concerns of this new generation will shape the global wealth map for decades to come.

The appeal of the U.S. market

By many measures, the U.S. has the world’s most developed financial markets, including the world’s two largest stock exchanges.4 According to the EIU, the U.S. ranks first globally in terms of market dynamics that contribute to wealth generation.5

Major U.S. companies are typically international in their approach, but Americans’ appetite for domestic investment is still strong, with 58 percent of U.S. investors saying they do not hold any foreign investments—nearly twice the average of the other surveyed markets.6

How will your investment strategy change in the next five years (Percentage choosing more foreign investment, by country/region) 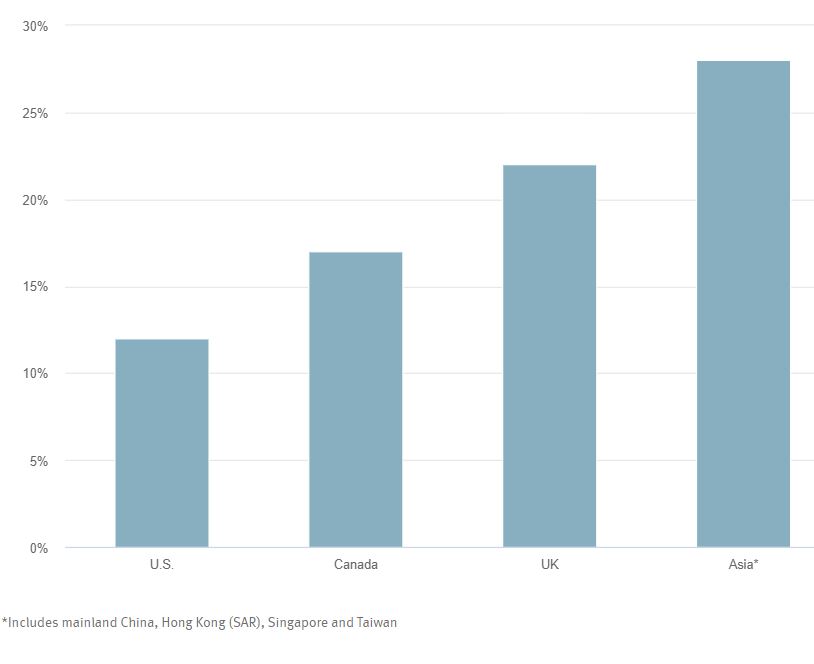 However, according to Bill O’Connor, dean of the Vault Innovation Academy and director of Vault Innovation Services, which focuses on helping companies with innovation, greater international exposure among younger investors also plays a role. “A more global mindset is definitely part of younger people investing more overseas: they’ve grown up in a technology-saturated, globally connected era,” O’Connor says. “This knowledge of and intimacy with people all around the world naturally has had an expansive effect on where they feel comfortable investing.”

These views of younger U.S. investors align with the more global mindset of Americans at the highest wealth levels (US$5MM+ in investable assets); only 40 percent in this group do not hold foreign investments, compared with 66 percent of HNWIs with between US$1MM and 5MM in investable assets.

Which of the following investments/holdings do you have outside of
the country in which you live? (Percent of U.S.-based respondents choosing each option)

For younger investors, their foreign investment choices could relate to a desire to spread their risks, with more younger Americans (23 percent) than older ones (16 percent) wanting to ensure greater diversification over the next five years. The drivers of these risks include worries originating from both home and abroad (about one-third of respondents cite concerns about both global and domestic economic uncertainty).

Access to information about foreign markets on the rise

The growing interest in foreign investments could also reflect the extent to which ease of travel and the role of technology are making the world smaller. U.S. survey respondents cite better education, access to the internet/new technologies and greater access to financial planning resources as top factors behind why opportunities to generate wealth have increased. As such, the overall pie of foreign investing appears likely to grow once successive generations come of age and acquire the means to invest.

Nonetheless, gaining exposure to international markets through foreign investments does not need to come at the expense of the domestic market. A study by the National Bureau of Economic Research found foreign investment by U.S. multinational companies has historically been linked to greater investments domestically too.8

The same could be true of individual investors, with rising wealth levels enabling HNWIs to increase their domestic and foreign allocations simultaneously. As a result, younger Americans’ increased openness to foreign investing, especially if it is accompanied by higher returns, could end up being a positive for U.S. capital markets as well.

Investment outlook for your 2021 portfolio

As the economic fallout from COVID-19 is absorbed, ultralow rates should make equities the asset class of choice and fixed income more challenging.