The synchronised, extraordinarily accommodative response of global central banks since the pandemic struck is giving way to different policy paths.

Housing and wages: The inflation connection

While stubbornly high inflation has largely been caused by supply chain disruptions, which should eventually wane in 2022, two other important factors, rising housing costs and wages, need to be monitored as those conditions could be stickier.

Eric Lascelles, chief economist at RBC Global Asset Management Inc., points out that housing costs represent a large proportion of the inflation basket for most countries though methodological approaches differ. Home prices across much of the developed world have increased to an extraordinary extent throughout the pandemic, which is fueling inflation. In the U.S., rental costs are now catching up. With housing costs representing a hefty 40 percent of the U.S. Consumer Price Index (CPI), inflation is likely to retain at least one key source of upward pressure over the coming year.

As for wages, given that seven of the last eight U.S. CPI prints have overshot consensus expectations, the risk, in our view, is that higher inflation seeps into wages, potentially setting up a wage-price spiral that would require central banks to abruptly rein in monetary stimulus, which could choke off the recovery and trigger financial market volatility.

Upside pressure on wages arises from labour shortages that have put workers in a position to demand higher pay. COVID-19 lockdowns hindered immigration in developed countries, and some three million workers in the U.S. opted for early retirement, according to the Fed. UK labour shortages are being exacerbated by the banishment of EU workers after Brexit. The minimum wage was also increased in several countries. 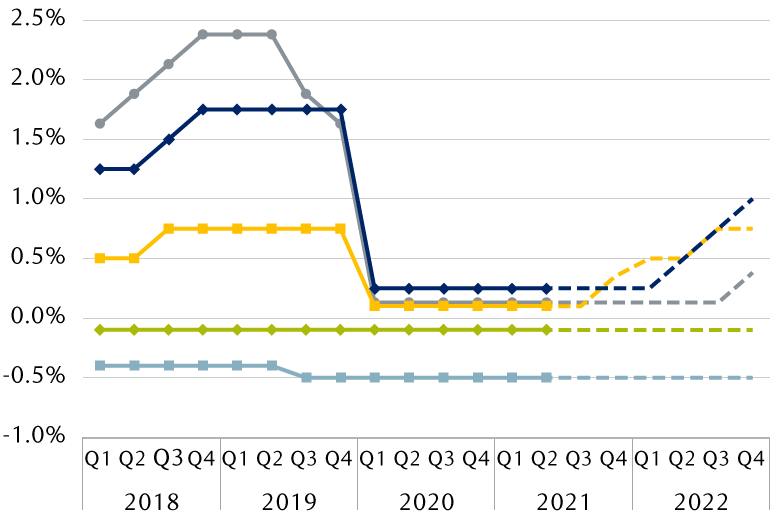 Markets expect the Bank of Canada (BoC) and the Bank of England (BoE) to be the most proactive in raising interest rates over the next 12 months, with as many as five BoC hikes by the end of 2022 priced into forward market expectations.

The BoC has been aggressive in scaling back COVID-19 stimulus. Given robust economic growth, high COVID-19 vaccination rates, and strong employment gains, the central bank recently reduced asset purchases to the level of reinvestments only, which has effectively ended its quantitative easing programme. BoC Governor Tiff Macklem and his BoC colleagues suggested interest rates could rise as soon as April 2022. October inflation is running at a high 4.7 percent year over year, which we believe the central bank will likely see as vindicating its position.

In the UK, the BoE recently stressed that some modest tightening of monetary policy would likely be necessary to meet its two percent inflation target. Prices surged in October, with the CPI reaching 4.2 percent, the highest level since 2018. The BoE has been waiting to see the impact on the labour market of the termination of the jobs support programme in September before increasing rates, but with unemployment continuing to fall and robust wage growth, the probability of a rate increase in December has grown. The market expects another two hikes in 2022.

In the U.S., higher and more persistent inflation may mean a shift in expectations. Could the current $15 billion per month pace of tapering be accelerated to say $20 billion per month? And how soon and by how much will interest rates be increased?

We continue to expect the Fed will keep the tapering pace at $15 billion as markets like consistency. With tapering likely to end in mid-2022, we expect the Fed to take stock of conditions at that time and look for unemployment below four percent before raising rates. We anticipate one increase in late 2022, though we acknowledge a second hike in 2022 is possible if inflation remains high.

At the other end of the spectrum, the Bank of Japan (BoJ) and the European Central Bank (ECB) are unlikely to increase interest rates before 2023.

Japan’s economic recovery has been slower compared to peers in 2021 due to a series of long-lasting and stringent COVID-19 restrictions. Inflation has been soft at a mere 0.2 percent year over year, partially due to government policies such as encouraging major telecom carriers to cut mobile phone fees. Given the muted inflation, we expect the BoJ to maintain its policy rate at negative 0.1 percent until late 2023.

By contrast, the October CPI in the eurozone reached 4.1 percent, up from 3.4 percent the previous month. According to RBC Capital Markets, the price increases were broad-based. With the recovery proceeding at a healthy pace, we believe the ECB is likely to start to rein in monetary stimulus. It already indicated it aims to terminate its Pandemic Emergency Purchase Programme in March 2022, though it will likely transition to a separate, existing asset purchase programme, lasting well into 2023, to continue to support regional economic activity. Markets do not expect the ECB to increase interest rates until sometime in late 2023.

Higher and persistent inflation can change market expectations for tightening of monetary policy, creating volatility. So far, fixed income markets have borne the brunt of this as equity markets seem to have been largely immune (for more, see the Nov. 11 Global Insight Weekly), though this may change over 2022. With this in mind, keeping an eye on housing costs and wages can help investors assess future central bank moves.