As central banks go deeper down the rabbit hole of negative rates, here’s how investors can navigate the upside down world of negative-yielding debt.

Negative-yielding debt … it’s strange, right? There are few hard and fast rules when it comes to investing, but if anything has ever come close it would be that those willing to save in order to lend to those wanting to borrow should earn a positive rate of return.

But after years of negative-yielding debt appearing across the global landscape, and following the European Central Bank’s (ECB) decision in September to push policy rates even further into negative territory, and on the back of recent reports that the Bank of Japan (BoJ) may be looking to do the same, on top of a Danish bank offering the first mortgage with a negative rate, it’s becoming increasingly clear that the negative interest rate experiments of recent years were more than just a bug in the system. They’re now likely to feature in central bank policy toolkits, and in markets, for years to come.

And while the global stock of debt trading to negative yields pulled back modestly in Sept. after ballooning to nearly $17 trillion over the course of August as global recession fears came to a head, the questions that everyone is trying to answer are: What will the fixed income landscape look like generally if negative yields are now a way of life? And what will it look like if and when a recession actually does occur, particularly for the largest issuer of debt in the world, the U.S.?

But before we dive into that, it probably pays to take a look at how this stuff even works. The table shows the lay of the land, beginning with central bank policy rates, followed by government yield curves, and then the total amount of debt for each region that is currently trading to negative yields. For our purposes, we’ll focus on the central bank policy rates and 10-year sovereign bonds. 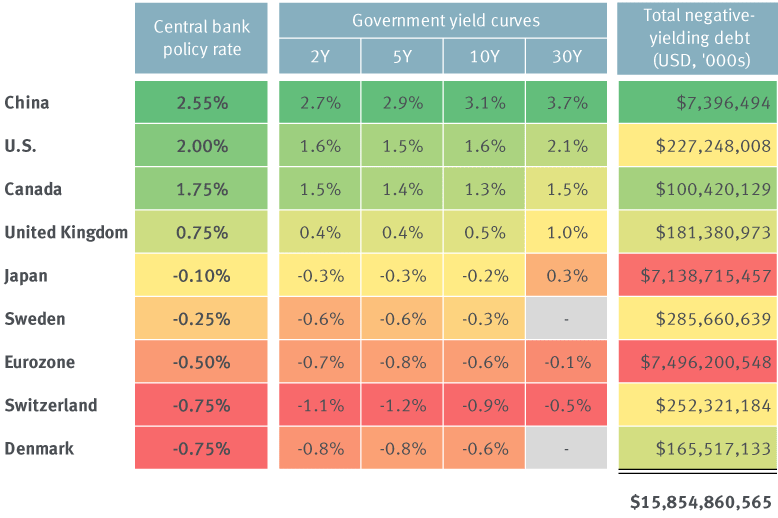 At a high level, central banks set short-term rates, and market forces largely determine the yields on government debt, though the market’s expectations for the future path of policy rates certainly play a role in those yields. So there can be negative short-term rates and negative-yielding longer-term debt, with both having different implications for savers and investors.

Negative policy rates: We’ll use the ECB as an example. The ECB cut its overnight deposit rate to -0.5 percent from -0.4 percent in Sept. In a negative rate environment this is the rate that the ECB charges banks on their excess reserves—or the amount of money beyond regulatory requirements—parked in accounts at the ECB. Thus far, the cost of this charge has been mostly borne by the banks themselves, which eats into profits. To this point they have largely avoided passing on negative rates to retail customers, only charging fees for private clients and companies with large deposits beyond roughly €250,000, though German banks haven’t been shy about their desire to charge all accounts, regardless of size, in order to offset the cost.

Negative-yielding 10-year bonds: It’s here where we find one of the quirks brought on by the large increase in the amount of outstanding negative-yielding debt: most bond investors have actually done quite well for themselves in recent years. Investors who bought Germany’s 10-year note in July 2017, which carried what appeared then to be an unacceptably low coupon of 0.50 percent, are sitting on a total return of 12 percent as the note they bought for €99.10 now trades at €109.90, for a yield of -0.71 percent (bond prices move inversely with yields). Not bad for a world of negative rates.

But we’ve started to see some pushback as Germany has begun to issue debt with zero percent coupons. To be sure, investors are not making payments to governments in a negative-yield world, they are simply paying premium prices for no future coupons. For example, in July, Germany issued its second 10-year note with a zero percent coupon; investors paid €102.64 at issuance and will receive par of €100 in 2029, delivering the investor a negative yield.

The very basic function of a bank is to attract short-term deposits at a certain rate of interest and to then make a longer-term loan at a higher rate of interest. But the money that banks pay you for your deposits has to come from somewhere, and flat yield curves, and a relative lack of demand for new borrowings, have made for a more challenging environment.

This basic relationship has broken down in the U.S. after the financial crisis. Deposits, loans, and the debt-to-disposable income ratio all rose in tandem to 2008. But as consumers shied away from taking on new debt since then, bank lending has struggled to keep pace with the rise in deposits. 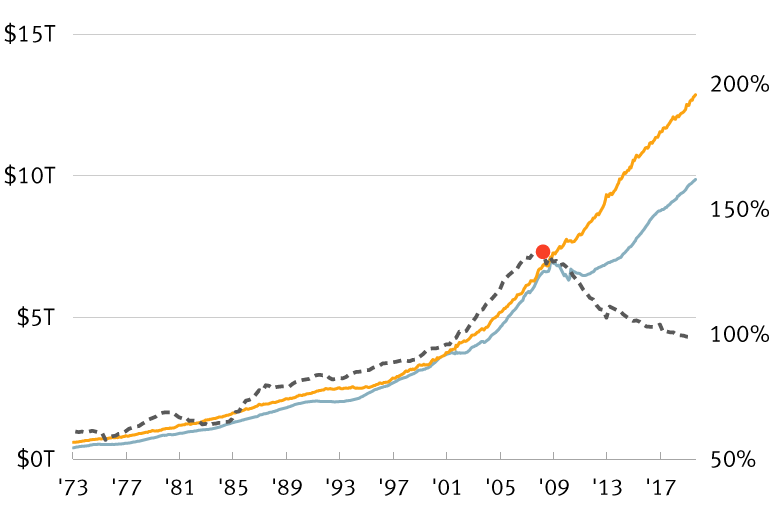 Source - RBC Wealth Management, Bloomberg, Board of Governors of the Federal Reserve System; data through 8/1/19; loans, leases, and deposits for all commercial banks

Banks are still paying for deposits, but it’s lower than it has been in the past—only about half of the fed funds rate this cycle when deposits have equaled fed funds in previous rate hike cycles. In Europe, savers aren’t paid anything, and could soon be charged for that privilege. But as foreign as that may feel, if we take a step back, perhaps it’s not all that absurd. There are storage costs for lots of things. You could buy gold, but then you would have to find space to put it, maybe in a safe deposit box, but banks already charge for those. You could simply take your money out of the bank and put it under the proverbial mattress, but that isn’t terribly safe, and therefore you would probably want to buy a safe.

In a world with plenty of cash, and little demand for it, the banks will still take your money and store it, but it shouldn’t be all that surprising if they start charging you for it.

Will the negative yield plague spread?

As the global stock of negative-yielding debt has again neared $16 trillion, the next question is whether the same fate awaits the U.S. market, where the Treasury and investment-grade corporate debt markets total roughly $25 trillion.

A common refrain in recent years is that low/negative global yields have dragged U.S. Treasury yields lower. But that hasn’t exactly been the case as the 10-year Treasury has opened up a sizeable gap over the comparable German 10-year Bund compared to historical norms. While the divergence is easy to explain—the U.S. economy has been expanding with the Fed raising rates when Europe has been slowing with the ECB cutting rates—we wonder what happens if/when the U.S. economy hits a downturn.

U.S. yields achieved escape velocity—when will they return to earth? 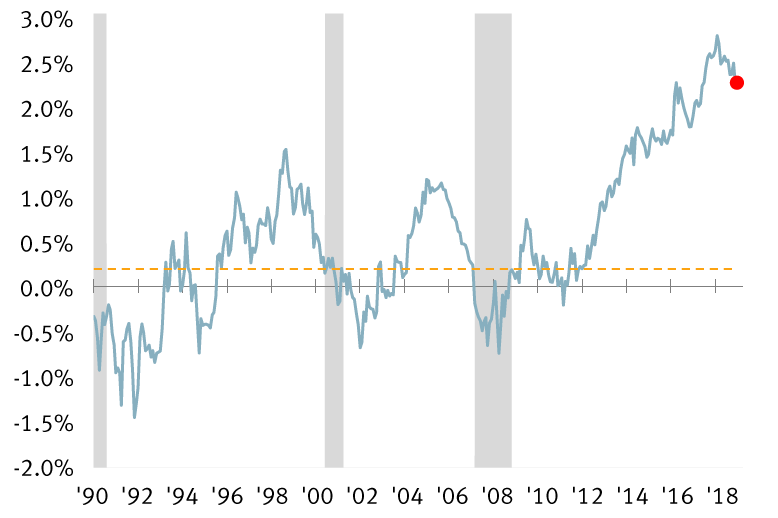 Prior to reaching escape velocity, the U.S. 10-year Treasury yield averaged about 0.20 percent over the German 10-year Bund yield. With a German 10-year yield of about -0.60 percent, that would put the U.S. yield in negative territory based on current levels. This is not our expectation, however. We believe the gap will close from here as we’ve likely seen peak U.S. growth, and with some chance that the European picture starts to improve with further ECB policy easing. In our view, the risk of negative yields in the U.S. remains minute for the foreseeable future. However, even if that gap closes modestly, we believe the U.S. 10-year yield could slip below 1.0 percent without much trouble, as it already traded as low as 1.46 percent in September. Our view remains that U.S. yields are likely to continue to trend lower.

With respect to the Fed and the potential for negative policy rates as a tool to fight the next downturn, officials have shown little interest in the past, having studied the issue in 2010. But, now that the ECB and the BoJ have both set the precedent, we wouldn’t rule it out in the future. However, our base case in the event of a recession is that the Fed returns rates to zero percent and employs forward guidance and quantitative easing as it did previously.

Or maybe that should read “divesting” outlook, as it were, in a negative-rate world. But what’s the average investor to do? We believe the key things to remember are that fixed income investing is largely about capital preservation, and that investing in general is a relative process—balancing the risks and rewards within the available universe of investment options and potential outcomes.

While low rates offer little in the way of income, bonds still offer ballast for portfolios in a world of rising uncertainty. As we have seen over the last 10 years, low yields can become no yields, and no yields can become negative yields. Who would lock in a German 10-year Bund yield of -0.60 percent or a 10-year Treasury yield of 1.60 percent? Stock markets can face much larger negative returns than that, and in such an event, a well-diversified portfolio between the two asset classes is likely to continue to offer the offsetting ballasts that it has historically.

Our mantra for some time now regarding U.S. fixed income has been to lock in coupons and yields where possible, and for as long as possible. Though volatility is likely to remain high, we believe the downside risks for yields remain greater than the upside risks at this stage of the cycle. In Europe, the average yield on investment-grade corporate debt is 0.41 percent, hardly a yield to retire on, but it’s still about 1.12 percent over comparable European government debt and equal to the five-year average.

Questions remain about whether negative yields are sustainable on a long-term basis, but for now they’re likely to remain a feature of markets and investors will have to adjust, as they always have to changing markets.