Fiscal stimulus joins the fight against the coronavirus

We look at governments’ “antiviral injections” of cash, which are critical to buttress economies against the economic threats posed by the pathogen.

Drastic restrictions are being imposed on citizens everywhere in the hope of tackling the pandemic, and containing the human cost of the crisis. A wide range of countries and cities are going into lockdown, including sweeping travel and shopping constraints. These measures will have extremely severe consequences for the global economy in the short term.

Trajectory of spread of COVID-19 in different countries 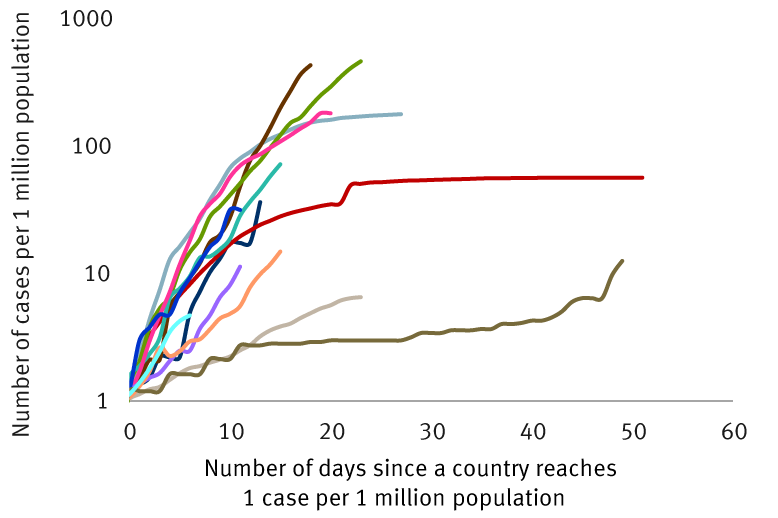 Until recently, monetary authorities largely took the reins of the response to the coronavirus pandemic and its impact on the economy with decisive action. Most developed central banks cut rates aggressively or, as in the case of the European Central Bank (ECB), unveiled a massive package to support the banks, or both.

But in itself monetary policy cannot effectively deal with a health crisis of this scale, the shocks to both supply and demand, as factories close or restrict their hours and consumption dwindles, and the negative feedback loop from the financial market turmoil.

Targeted fiscal policies are critical to prevent a cash flow crunch from turning into a solvency crunch, and to sustain the economy amid restrictions and confinement. As RBC Capital Markets points out, while central banks can provide liquidity, only government action can ensure that it is channeled to businesses, in effect backstopping the corporate sector.

Many governments in developed economies are stepping to the plate, though perhaps not as systematically as financial markets might like. More action is certain to come, in our view, given the rapidly evolving crisis. We look at how various regions are tackling the problems.

With the epicenter of the crisis moving from China to Europe, and Italy in particular, this region has taken many steps to contain the virus and respond to the crisis. Most of the continent is locked down with restrictions on civil liberties unseen since World War II in effect on local movement (only grocery and pharmacy shopping is permitted), travel, and large group gatherings. Many countries have a curfew after 6pm, and police control is becoming the norm.

With the resulting fall in demand, a recession looks all but inevitable. Its magnitude will depend on the duration of the lockdown, but fiscal measures, in addition to the ECB’s package to support banks, should help to lessen its intensity. Negative growth rates of -1.0 percent to -2.0 percent for 2020 should not be dismissed, in our view.

The antiquated EU fiscal rules, which require national deficits to be restricted to three percent of GDP, are being set aside for now. Italy started off with an injection of a little more than €3.5 billion, though it will now make €25 billion available via an emergency fund, with some €12 billion of this likely earmarked for immediate health care spending, bridge loans to small and medium-sized enterprises (SMEs), postponing tax payments, and some broad protection for workers.

France is offering guarantees to corporate debt to the tune of €300 billion, in addition to allowing companies to defer tax payments, while temporarily suspending households’ energy bills and rent. Importantly, German leaders have put aside an obsession with balanced budgets, which is a requirement enshrined in its constitution. The government announced it would offer unlimited federal guarantees to facilitate corporate lending.

UK follows in the footsteps

The UK’s official containment strategy was initially much less stringent than what we’ve seen from the continent. But fiscal measures were nonetheless drastic with the UK government guaranteeing up to £330 billion of corporate loans, in an effort to convince companies not to lay off workers in light of lower activity levels. How quickly these funds can be channeled to companies and whether they are willing to take on more debt remains to be seen. Downing Street also announced £20 billion in tax and spending measures, in addition to the £12 billion support package unveiled in the Mar. 11 budget statement to tackle the pandemic.

In a press conference on Mar. 17, the Trump administration proposed a new, eye-popping stimulus package that could total more than $1 trillion, or just under five percent of U.S. GDP, to protect individuals and businesses. This comes on top of an $8 billion package announced two weeks ago, and another one signed into law on March 18. Details of the third package are being ironed out and should be released imminently. The stimulus needs to be approved by Congress, but it seems to have broad bipartisan support.

Measures may include: $250 billion in direct payments of $1,000 to most Americans, with an additional $250 billion to be paid out within the next six weeks after the first payment if the crisis continues; $300 billion in lending to SMEs, the lifeblood of the economy; $50 billion in relief for the hardest-hit industries such as airlines and hotels; and an extension of tax payment deadlines and tax credit for sick leave.

With respect to the direct payments, by comparison, under the 2009 America Recovery and Reinvestment Act, $250 checks were sent to people on social security, while the average taxpayer received a tax cut of $400 per individual and $800 per family. The current payment under consideration would therefore be more generous, but should the epidemic last a few months or more, as currently anticipated by epidemiologists, more cash handouts may be needed to combat the financial damage.

Overall, fiscal deficits as a percentage of GDP are set to rise abruptly. The U.S. is a case in point. At the height of the Great Recession, the U.S. fiscal deficit reached close to 10 percent of GDP. The ratio this time around could well exceed this eventually, as any likely recession would be anything but routine.

Monetary, fiscal, and regulatory policies are necessary but not sufficient to completely stanch the crisis. For a sustainable rebound in financial markets, some concrete success in the fight against the coronavirus on the medical front (e.g., number of new cases plateauing, more efficient testing, vaccine development, etc.) is also probably needed.

How to protect your business from ransomware attacks

Protecting your business from cybercriminals begins with understanding what ransomware attacks are, what you can do to prepare and how you can recover if you are targeted.

By 2040, an estimated 11.6 million Americans will live with cognitive decline, affecting nearly all families, according to data from the Alzheimer’s Association.