“We are all Keynesians now,” quipped Milton Friedman, Nobel Prize winner and a patriarch of modern-era capitalism, as he pondered the turbulent political and economic environment during the Nixon years. Jumping ahead to today, with two separate periods of bazooka-sized bailouts and stimulus packages in a little more than a decade, that famous phrase is even more apropos.

The ink isn’t even dry on Washington’s $2 trillion coronavirus aid package and some senators are already laying the groundwork for more.

We don’t doubt there will be additional rounds of federal aid, at least for the hardest hit areas of the country, and perhaps more for public health. With New York currently the epicenter of the U.S. coronavirus crisis, and the state’s estimated $15 billion coronavirus-related revenue shortfall well in excess of the $3.1 billion or $3.8 billion allocated for it in the $2 trillion package, we think additional federal relief will be in store.

This no-holds-barred approach to U.S. fiscal spending (borrowing) and aggressive spending in other countries, combined with the swift and resolute actions of major central banks, should help blunt the domestic and global economic downturn and could potentially support a faster and stronger recovery once the virus has largely run its course.

Following is our assessment of the key provisions in the $2 trillion U.S. aid package—the Coronavirus Aid, Relief, and Economic Security Act (CARES Act)—from the perspective of the U.S. economy.

Among the most important provisions are the direct cash payments to American workers and increased unemployment benefits, totaling about $300 billion. If this health crisis lasts a number of weeks rather than many months, these funds can help plug some holes in household balance sheets.

The vast majority of American workers would receive a one-time cash payment of various levels. The maximum amounts are $1,200 for individuals, $2,400 for married couples, and an additional $500 per child.

The amounts are means tested, so they decline at higher income levels and then phase out. For example, an individual that has annual adjusted gross income of less than $75,000 would receive $1,200. The amount decreases incrementally as the income level rises to $99,000, and then phases out entirely.

The sliding scale of payments according to various scenarios (single, married, with children, without children) has been estimated by the Tax Foundation, a Washington D.C.-based tax policy organization. 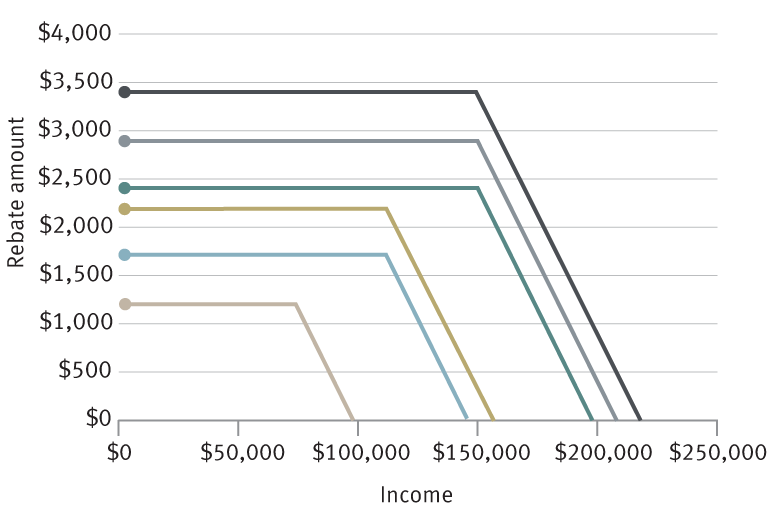 Importantly, the bill also boosts payments for the unemployed, which can’t come soon enough given that nearly 3.3 million Americans filed for unemployment benefits last week, almost five times the previous weekly record set in 1982, a period when a vicious double-dip recession occurred amid the Federal Reserve’s assault on sky-high inflation.

During this coronavirus crisis, we expect unemployment benefit claims to continue to surge in the coming weeks given many parts of the country are nearly shut down and more “stay at home” measures could be implemented.

In the CARES Act, expanded unemployment payments of $600 per week for four months per unemployed worker would be provided. That amount is on top of existing state-administered unemployment benefits that vary in amounts. The goal of this extra $600 per week provision is to cover 100 percent of the average wage. “Gig” workers will also receive the payments.

For many working families that have experienced a dramatic drop in income due to work stoppages because of the coronavirus crisis, these are stop-gap measures, and may not fully cover living expenses, especially in cities and states with high costs of living. But the money should help keep millions of families afloat for the time being. We view these two provisions as essential for households and the economy, and more funds may be needed if battling the virus lasts months rather than weeks.

Other major provisions in the $2 trillion CARES Act target businesses, including distressed industries.

For example, there is $349 billion in loans guarantees for small businesses, i.e., those with fewer than 500 employees. There are employee retention incentives, so that companies that keep employees on the payroll could benefit from some loan forgiveness.

The bill directs a separate $454 billion tranche to the Treasury Department to support credit facilities recently established by the Federal Reserve for loans to businesses, with an emphasis on companies that employ between 500–10,000 people, or medium-sized businesses. There is much more here than initially meets the eye, as the funding can be leveraged up significantly, to up to $4 trillion, according to the Treasury Department.

In addition, the bill provides support for the beleaguered airline industry (including cargo airlines) of $29 billion in grants and $29 billion in zero-interest loans, which represents the total amount the industry requested. The grants are designated for employee wages, salaries, and benefits. An additional $3 billion in payroll grants are earmarked for airline catering, baggage handling, security, and other contractors. Finally, there is another $10 billion provided for airports around the country.

The CARES Act is imperfect, as is almost always the case with legislation that arises out of compromise, and especially with bills that are rushed through the process. The details will likely be nitpicked in the days and weeks ahead, and the flaws will be exposed.

But we are of the mindset that during a crisis, Washington and other policymakers should not let the perfect be the enemy of the good. We think the CARES Act and the two smaller federal aid bills that preceded it will help blunt the economic downturn, and will ultimately be supportive of the recovery. Indeed, we are all Keynesians now.