Financial advisors bring their kids into the business they love

At RBC Wealth Management, the people we work with can be like family. In some cases, they are family.

Five years ago, when the demands of her practice meant she needed to bring a partner on board, financial advisor Susan Stewart wanted to be sure it was someone who shared her values.

She looked no further than her own family to find someone who fit the bill.

Her daughter, Taylor Stewart, first went into politics after graduating from college but decided she was ready to make a career change when Susan Stewart encouraged her to apply for an open client associate position at her firm in Chevy Chase, Maryland. After working in that role for a year and a half, Taylor Stewart joined the firm’s advisor training program and began working for her mom as a junior advisor specializing in financial planning.

Parents can have a lot of influence on what careers their children decide to pursue. This rings true at RBC Wealth Management, where several financial advisors who are passionate about the work they do—and the company they do it for—have brought their children into the business they love. Through conversations at the dinner table and by watching their parents chart successful careers, this second generation saw firsthand the growth of industry and how they could make a difference by getting involved.

“From as early as I can remember, I’ve always been really proud of and had a lot of admiration for the fact that she started her own business, especially as a woman in a male-dominated industry,” Taylor Stewart says of her mom.

The two have worked together as a team for five years, although Taylor Stewart admits she was initially uncertain about the idea. “I’ve found it to be the most professionally rewarding experience, and I’m glad we took the leap,” she says. “I’ve learned so much from getting to work alongside my mom.”

That includes expanding her view of the role financial advisors play in the lives of their clients.

“Initially, I had a very narrow understanding of what a financial advisor did—thinking it was all just numbers and investments,” she says. “I quickly learned from my mom that, at its core, it’s about connecting and building deeply meaningful relationships with clients.”

The Stewarts joined RBC Wealth Management in 2019, drawn by its corporate responsibility and commitment to diversity.

Both mother and daughter note that working side by side has helped them recognize strengths in themselves and one another. “We are good at balancing each other out,” Taylor Stewart says.

Debbie Sullivan’s son David Schwartz followed in her footsteps in more than one way: neither of them took a direct path to becoming a financial planner.

Sullivan intended to be a doctor when she went off to college, but ended up dropping out and moving to Houston, Texas, where, after a brief stint with Southwest Airlines, she found work at a local firm.

She enrolled in night school at the University of Houston and took business courses to pursue her new passion. “When I started out, I was going to heal people’s health, and now I heal their finances,” she says. “So it’s really not that different.”

Schwartz, meanwhile, had his sights set on becoming an executive chef, but while studying culinary arts, he soon realized that the career was not a good fit for him.

A conversation with his mother about her role as a financial advisor piqued his interest in the industry, and he decided to intern with her while pursuing an undergraduate degree.

Schwartz eventually joined Sullivan’s team full time, and following in her footsteps, he has since become a CERTIFIED FINANCIAL PLANNERTM (CFP®) professional, completed RBC Wealth Management’s advisory training program in the fall of 2019, and is now a financial advisor as well. 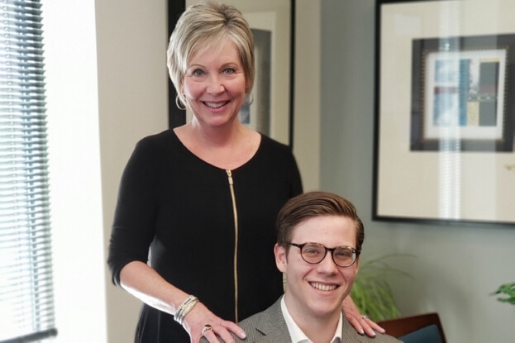 “I feel blessed to have my son working with me,” Sullivan says. “I enjoy our time together and love to see his professional growth. What was surprising to me was how well we work together.”

Schwartz has valued the opportunity to get to know mom in a new and different way over the last six years: as a successful career professional he can learn from.

“The biggest surprise to me is just how many instances there have been where I meet people that she has had a positive impact on,” he says. “Growing up I would hear of her successes, but you never fully understand them until you see it firsthand.”

All in the family

Maureen Kerrigan was 24 years old and newly married when her father died suddenly in 1983. One of the conversations with her mother that followed their tragic loss is something she’ll never forget. “She looked at me and said, ‘Maureen, I don’t know where Daddy kept the checkbook,’” Kerrigan recalls. “From that time on, I took over doing all her taxes and helped her with her finances.”

After stepping up to help her mother early on, Kerrigan ended up working for many years in financial and regulatory analysis, but in 2002 she decided to take a career leap and become a financial advisor. Her oldest daughter, Courtney Mahoney, was 15 years old at the time.

Now the pair work together for the Providence, Rhode Island, branch of RBC Wealth Management-U.S. As financial advisors and family, they continue to inspire one another and prepare and empower clients for their financial futures.

“I saw someone who left the house every morning at 4:30 and came home still energized,” Mahoney says. “I’ve only been doing this for a few years, and now I see I have the same energy. I’m excited about the impact we have on people’s lives.”

Mahoney admires her mother’s focus on empowering women “through every facet of her life,” something she says she may not have seen if she weren’t working so closely with her every day. She knows that passion was sparked when Kerrigan helped her own mother (Mahoney’s grandmother) all those years ago at a moment of crisis and uncertainty.

From assisting and educating an older generation, to raising a younger generation, Kerrigan has sparked financial interest throughout her family tree. She now expresses deep gratitude for the chance to work side by side with her daughter.

Take a look behind the scenes at the culture, leadership and day-to-day life at RBC Wealth Management in our latest issue of Prosper•US magazine. Designed for women who advise, plan, spend, save and give, this RBC publication is full of inspiration and practical tips for women in the industry. Read the Spring 2020 issue.