Negotiations are off … no, they’re on

President Donald Trump’s tweet early in the week pulling the plug on negotiations for fiscal relief to support businesses and individuals prior to the election jolted markets. Equities retreated and bond yields fell as investors sought the safety net provided by bonds. A lack of support would hurt the unemployed and could raise the specter of unemployment for those currently working, curbing their appetite for spending.

The announcement came on the heels of Federal Reserve Chair Jerome Powell’s speech warning that the risk to the economy of under-delivering on the fiscal front was much greater than that of over-delivering. A recent survey of institutional investors by RBC Capital Markets found that just over 60 percent of respondents believe additional fiscal stimulus is needed for the U.S. economy to fully recover, and close to half believed a bailout package would come in Q4.

Stimulus of at least $1 trillion is widely seen as desirable by economists. Negotiating positions in Congress had been staked out, with the Democrats in the House of Representatives recently passing a $2.2 trillion package and the Republicans in the Senate suggesting a $600 billion package, pointing to the congressional chasm. The White House has proposed a $1.6 trillion deal.

In a now characteristic volte-face, Trump announced 48 hours later that he would negotiate a “bigger deal.” Should these negotiations not come to fruition before the elections in early November, a blue wave, where Democrats win the presidency and control of both chambers of Congress, may well be the fastest path to delivering stimulus, while a divided Congress could spell more gridlock and less substantial relief.

Not over yet, but clearer path forward

The fiscal drag in the U.S. is currently substantial, with the federal government already spending some $200 billion less per month than back in April, when one-off checks to households were sent out and unemployment payouts were at their most generous. Moreover, spending by U.S. states has also been constrained as most operate under balanced budget requirements and with government revenues dented by the crisis, expenditures are being reined in.

Despite the lack of another round of fiscal stimulus and the country’s battle with spiking COVID-19 infection rates, the U.S. economy did not contract as the summer wound down. The capacity of people to adapt to a crisis and some headwinds so far proving to have less of an economic impact than initially feared buttressed the economy’s performance in Q3.

In particular, credit defaults will likely top out below the levels seen during the global financial crisis, according to RBC Global Asset Management. Banks seem increasingly comfortable with the credit losses they have provisioned for, both for commercial loans and residential real estate, and actual losses remain quite small.

RBC Global Asset Management Inc. Chief Economist Eric Lascelles points out that in the U.S., a slightly lower percentage of mortgage holders—seven percent—are deferring mortgage payments than at the peak of the crisis a few months back (eight percent). The improvement is even starker in Canada with only six percent of Canadian mortgage holders deferring mortgage payments, down from 16 percent at the peak of the crisis.

Moreover, rising house prices in the U.S. and Canada are creating an exit opportunity for households in difficulty, so that only a small fraction of mortgages is likely to be foreclosed upon. Housing markets in both countries could well be somewhat weaker in the future, as unemployment and lower immigration take their toll. But Lascelles suggests this may happen with a sufficient lag, giving the U.S. and Canadian economies time to be in a much better position to handle it, having already navigated around many fiscal and credit challenges.

Given the better economic performance in Q3, RBC Global Asset Management recently upgraded its 2020 growth forecasts for both the U.S. and Canada. Lascelles now believes the U.S. economy could contract by 3.5 percent, much less than the prior estimate of negative six percent. Canada’s economy could shrink by 5.2 percent, rather than a more painful seven percent that he had pencilled in.

Both the U.S. and Canada could return to their 2019 peaks earlier than previously expected, with the U.S. potentially as early as the end of 2021. 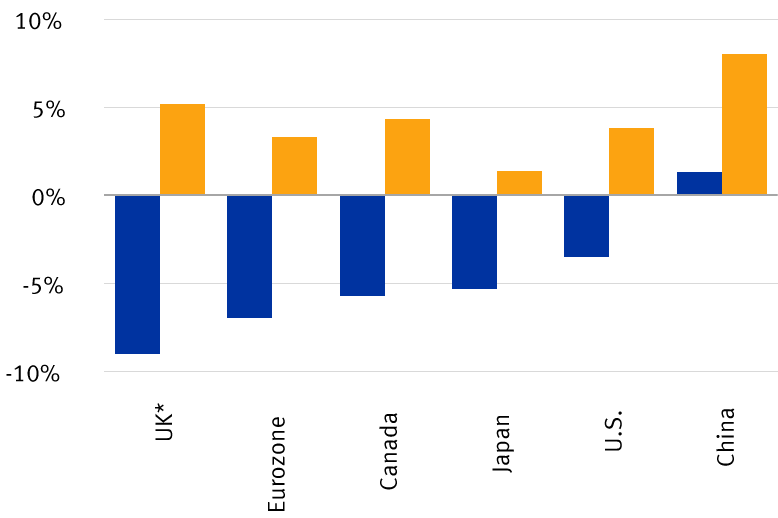 *For the UK, the magnitude of the GDP bounce in 2021 will depend on the outcome of Brexit negotiations. Source - RBC Global Asset Management; data as of 10/5/20

These new GDP forecasts remain fluid, given the high risk around the last quarter of the year. After all, the current spike in infection rates could prove more painful than expected. But while economic growth could underwhelm, we do not expect a double-dip recession. Economic activity indicators, such as Purchasing Managers’ Indexes, are largely in expansion territory. Admittedly, these indicators are no longer actively rising from month to month, meaning the “easy” part of the recovery is probably over.

Lascelles is not alone in upgrading his forecasts. The International Monetary Fund (IMF) recently announced that the world economy should perform better in 2020 than it originally believed at the peak of the pandemic. Yet Kristalina Georgina, the managing director of the IMF, hastened to add that the “calamity is far from over.”

After the September pullback in equities, we have increased our recommended positioning of global equities to Market Weight from a modest Underweight.

On a 12-month view, we expect the global economy will gradually normalize thanks to the entrenched commitment of major central banks to an ultralow interest rate policy, fiscal support, and further progress taming the COVID-19 virus. As the global economy recovers, so too will corporate earnings. Valuations may seem elevated in the U.S., but they are not unreasonable in an environment of very low rates.