Even with U.S. presidential election controversies still boiling, it’s not too early to think about potential equity investment opportunities as things simmer down.

Preliminary election results are pointing to a status quo Congress with Republicans holding the Senate majority by a slim margin, although control of the upper chamber could take until early January to sort out if two runoff races are necessary in Georgia. In the House of Representatives, Democrats are expected to retain control, albeit with a smaller majority.

We think three sectors are likely to be the most impacted by power dynamics on Capitol Hill: Energy, Health Care, and Financials.

Sector performance vs. the S&P 500 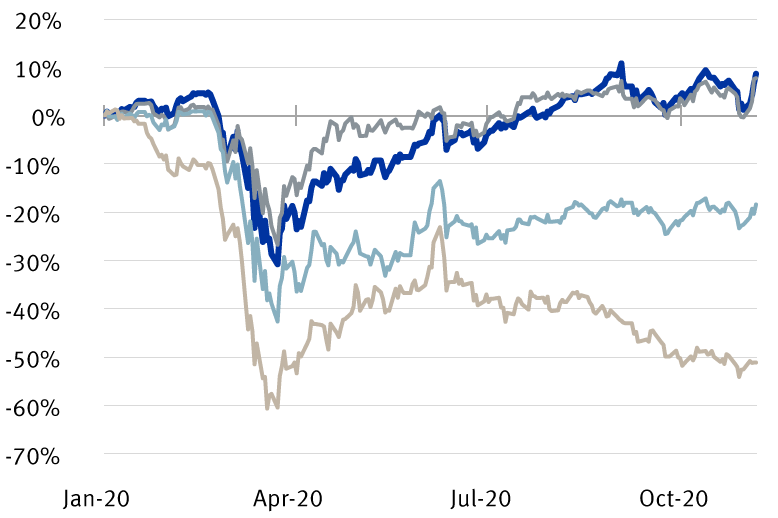 These sectors have been held back by election headwinds because market participants believed that all three would face challenges under a Blue Wave scenario. The thinking went that the fossil fuel industry would be confronted with a faster transition to greener energy sources and tougher regulatory schemes; segments of the Health Care sector—particularly pharmaceuticals—could face policy reforms that would constrain profits; and Financials could be vulnerable to additional regulations. In contrast, a gridlock scenario, in which control of government is divided between the political parties, would relieve pressure in these areas.

If congressional gridlock plays out, and the U.S. economy and corporate profits continue to improve over the next year as we anticipate, we think these sectors have the potential to make up some of their lost ground.

Among the three sectors, we prefer Health Care and Financials for long-term investors, and view the Energy sector as being more appropriate for those with shorter time horizons and more tactical investment goals.

Energy: A reprieve, not an all-clear