Job one is done. Since late last year, the Fed has used its most powerful tool, forward guidance, to prepare markets for rate hikes. Ever-higher inflation this year has led the Fed to ramp up the pace of those hikes in an effort to get policy rates back to “neutral,” and expeditiously so. Now, following a second consecutive 75 basis point (bps) rate hike taking the target range to 2.25 percent to 2.50 percent, the stance of monetary policy sits in the middle of the Fed’s estimated neutral range for the economy of 2.00 percent to 3.00 percent, where, in theory, policy is neither restricting nor boosting economic growth.

And job one was relatively easy—there were few risks and low chances of making a policy error to this point and from low rates amid a strong economy and robust labor markets. Job two begins now, and it will be decidedly more difficult, in our view.

Here for a good time, not a long time

Fed Chair Jerome Powell maintained yesterday that the best way to sustain the economic expansion is to get inflation under control, and to do that by getting policy rates to neutral, and perhaps to moderately restrictive levels. What does that mean? No one knows, up to and including the Fed. The neutral rate is just a “guess” based on models, and it can’t be observed in real time. It’s only after the fact, and usually in the midst of a recession, where we can look back and say, oh, right, so that was the neutral rate.

As the chart shows, that breaking point was 6.50 percent in 2000, which gave way in short order to a recession; it was 5.25 percent in 2006 and a full 14 months where the Fed was able to leave policy alone before the financial crisis. In 2019? Cracks started to form in the economy with rates at just 2.50 percent, and it was barely six months before the Fed began to cut, followed by the pandemic in 2020. The point is that the Fed is either raising rates, or cutting rates. A rare exception was the 1994–1998 period, and much has been made about that episode, where aggressive Fed rate hikes didn’t spark an official recession, but the operative word in this sentence is “rare.”

The market sees more rate hikes in the pipeline, but also rate cuts 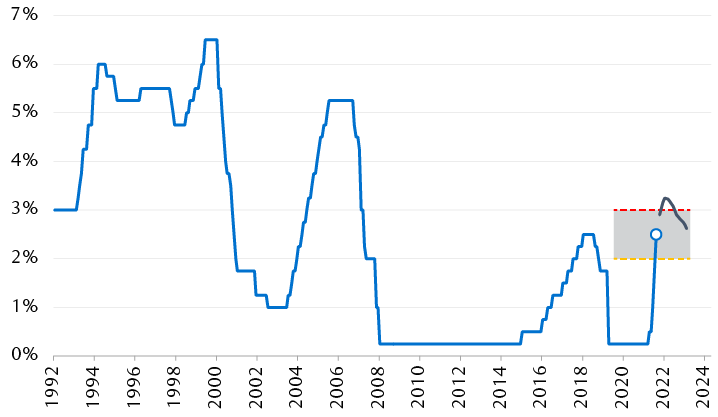 Line chart showing the U.S. federal funds rate over the past thirty years and what the market expects going forward, which is a peak policy rate of about 3.25% by the end of 2022, followed by modest rate cuts through 2023, with the policy rate ending that year around 2.75%.

Note: Neutral range shows the low (2%) and high (3%) projections from the Fed’s Summary of Economic Projections for June.

Even before this week’s policy meeting, we expected the Fed would only tip-toe past the neutral level as the stakes only get higher, with the Fed likely to slow the pace of rate hikes all the way back to 25 bps increments, and only as needed based on the data, starting with the Sept. 20–21 meeting, in our view. With markets now pricing rate cuts as early as next year, we think the Fed is already nearing the end of this rate hike cycle. And the case for that view only grew stronger with this week’s GDP report.

Those are the questions many are asking following the first estimate of Q2 U.S. GDP this week, which came in at -0.90 percent. That marked the second consecutive decline, following the 1.60 percent drop in Q1. Well that’s easy. The rule of thumb is two quarters of economic contraction is a recession. We’re in a recession.

But not quite. Yes, Q1 was bad, but as we have discussed previously, and as the table shows, that “phantom” decline almost entirely came from a drop in imports on supply chain issues and lockdowns in China. We can’t buy what we can’t get, and it was only one weak category, so diffusion was low. Suspect that doesn’t play into the recession narrative.

Breaking down the key drivers and trends of GDP

Weakness in Q2 was a bit more broad-based as personal consumption slowed, inventory drawdowns subtracted from growth, and fixed investment fell sharply as higher rates took their toll on the housing market. But consumers continue to shift spending from goods to services, which the Fed has wanted to see, and that should take some pressure off of goods price inflation. Inventories should be ignored, in our view. Companies built them up last year, which boosts GDP; they’re drawing them down this year, which is a drag on growth in any given quarter, but over time it eventually offsets itself.

The National Bureau of Economic Research (NBER) officially dates recessions, but it basically only announces them after the fact. If we are in a recession now, we likely won’t “officially” know about it until sometime next year.

While we don’t make the rules, would we say that we’re currently in a recession? Probably not. We’re coming off of 2021 where we had three quarters of more than six percent growth, so in terms of “depth” the contraction doesn’t look that deep. The “diffusion” of weakness still isn’t broad-based, and the “duration” of the true economic weakness may only be a couple of months at this point.

But there’s no doubt that the economy is losing momentum, and quickly, and that recession risks later this year are only growing. Now it’s a question of how far the Fed wants to push this.

At the end of the day, monetary policy acts with a long lag on the economy. So, given all of the economic and market stress we have already seen this year, it suggests to us that the Fed doesn’t have to do much more, and that rate hikes already delivered to this point will do their job in restraining growth and inflation into next year. We expect roughly two more 25 bps hikes this fall before the Fed stops around three percent.

And this is borne out by recent market action. Since the Fed started with a 75 bps hike in June, followed by another this week, along with two quarters of economic contraction, the S&P 500 is up by more than 11 percent over that stretch, yield curves—though still inverted—have started to re-steepen as the market dials back rate hike expectations, and credit markets only show mild signs of stress.

For another week of Fed aggressiveness, mixed economic data, and general volatility in a year certainly not lacking for it, markets seem to have weathered it rather well thus far.