Debt, deficits, and Modern Monetary Theory—there is a connection

Modern Monetary Theory says that deficits aren’t so scary. Is there really such a thing as a “free lunch,” or is the concept too good to be true?

Rising deficits and increasing debt are a frequent cause of consternation for markets and investors. Each, historically, has often been politically charged, with major U.S. parties labeled as free spenders (Democrats) or deficit hawks (Republicans). But the passage of the Tax Cuts and Jobs Act of 2017 (TCJA) and its significant boost to future deficits has blurred the lines and may have made past labels irrelevant. In the 1930s, John Maynard Keynes asserted what was a radical idea at the time that governments should borrow and spend to bring the economy out of a deep downturn. (Crucially, he went on to say those debts should be paid down when good times returned.) Seven decades later, politicians had embraced deficit spending so wholeheartedly that then-U.S. Vice President Dick Cheney felt comfortable saying that “[President] Reagan proved deficits don’t matter.” Now a “new” concept—Modern Monetary Theory (MMT)—suggests this may be more truth than fiction. In fact, MMT advocates suggest current deficits may be too small and that an “inevitable” future day of reckoning isn’t necessarily a foregone conclusion. Some clarity around this issue would be useful.

Debt and deficits: What’s the difference?

Investors often have questions on these terms, and the fact they are often used interchangeably creates confusion, but in the realm of public sector (government) fiscal policy these two words, while connected, describe different things.

While 150 percent is a large number, we note that Japan’s debt-to-GDP ratio currently hovers near 250 percent, and Eric Lascelles, chief economist at RBC Global Asset Management, doesn’t feel a 150 percent debt-to-GDP ratio is necessarily unsustainable. Key to this, in his opinion, is the U.S. dollar’s reserve currency status, which ensures the U.S. government should still be able to borrow at a relatively low rate, as well as the fact that the U.S. debt and financial markets are the deepest and most liquid in the world. 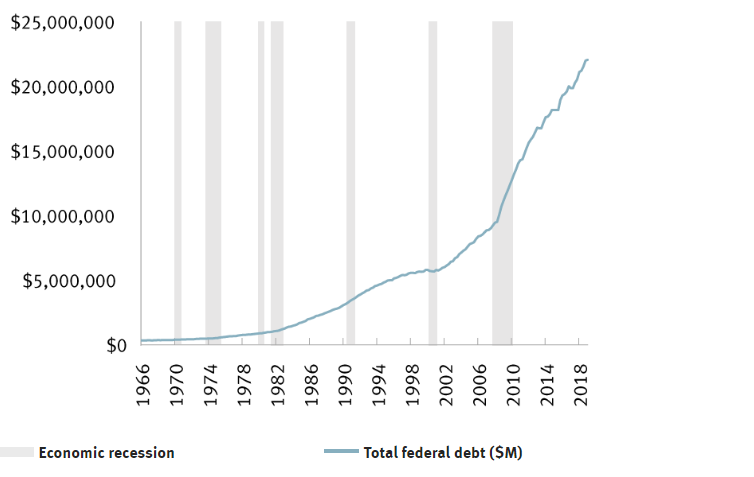 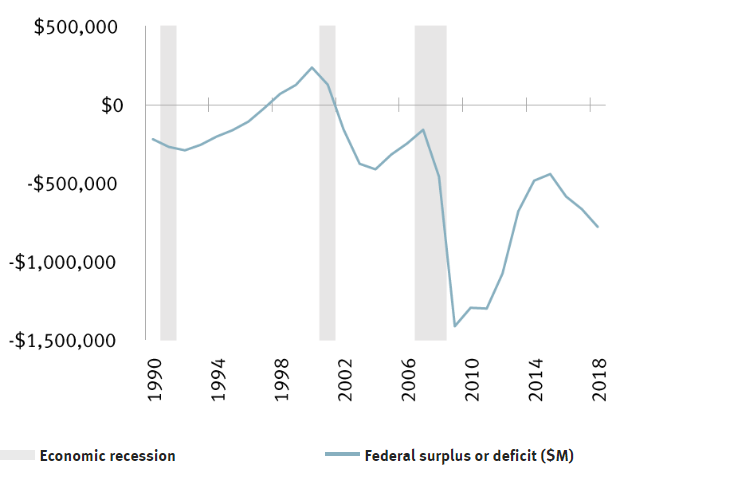 Traditional economic orthodoxy is that high deficits result in increased government debt issuance, which then leads to higher interest rates that eventually suppress economic growth. But as we’ve seen during the U.S. economy’s record-long expansion, interest rates have remained contained even amidst increased issuance of U.S. government debt, which makes it reasonable to ask whether the traditional debt/deficit concerns are misplaced and whether this sets the table for broad adoption of MMT.

MMT to the (deficit) rescue?

While often referred to as “new,” MMT is really an evolving chain of economic thought going back over 100 years. It has seen increased popularity as a result of recent political policy proposals in the U.S., such as the Green New Deal, increased infrastructure spending, and as a means to expand the social safety net through Medicare for All and job guarantees. Furthermore, in an environment of rising budget deficits/federal debt as a result of tax reform and fiscal stimulus, MMT does make it seem like it’s possible for us to “have our cake and eat it too.”

The media has focused on the theory’s assertion that budget deficits in and of themselves aren’t necessarily bad. Stephanie Kelton, professor of public policy and economics at Stony Brook University and a prominent MMT proponent, stated in a recent CNBC interview that “MMT starts with a really simple observation and that is that the U.S. dollar is a simple public monopoly ... And therefore, it [the U.S. government] can never run out of money … It never has to worry about finding the money in order to be able to spend.” Unlike our own personal finances where our ability to spend is ultimately limited by what we earn, under MMT government spending would not be constrained by the need to raise taxes or borrow money, it could turn on the printing presses and simply spend the money in the economy.

MMT puts the government front and center in implementing policy, entrusting it to exercise sound, disciplined fiscal measures. Fiscal policy emanates from Congress, so it would be expected to act as the regulator, judging whether potential new spending runs the risk of accelerating inflation and if so, then avoid doing that. This discipline should, according to the theory, allow the U.S. to essentially self-finance future deficits, although important to this will be the U.S. dollar retaining its reserve currency status.

Fiscal discipline is a key requirement since Kelton and others look to perceived levels of inflation over time as something that would make deficits matter. The discipline from Congress to limit inflation comes, according to Kelton, in its ability to craft the appropriate policy tools, which could arise in several forms—raising taxes, increasing regulations to limit overcapacity, and tightening lending standards, to name a few.

The Fed and traditional monetary policy are all but sidelined under MMT, as the theory presumes the natural rate of interest to be 0 percent. Furthermore, since, as MMT advocates suggest, the theory promotes full employment and stable prices (inflation), this means it all but subsumes the Fed’s dual mandates. The concept advocates for the Fed to have the ability to directly fund government expenditures, though to do so would require amending the Federal Reserve Act.

Can that “MMT dog” hunt?

A recent Barron’s article on MMT states that “there is no country that perfectly follows the MMT model of political economy.” But the article quotes Bill Mitchell, a professor at Australia’s University of Newcastle and a coauthor (with L. Randall Wray and Martin Watts) of a new MMT textbook on macroeconomics as saying that China comes closest to following the MMT model for demonstrating “the opportunities that they have as a monopoly supplier of their currency.”

Japan, the world’s third-largest economy, has been credited with being a real-time MMT success story as the government has effectively been able to print money to stimulate the economy without igniting inflation and keeping interest rates low while its debt-to-GDP ratio hovers near 250 percent. Yet in April 2019, both Japan’s minister of finance and the governor of the Bank of Japan dispelled the notion they are following an MMT strategy.

Professor Kelton suggests the U.S. is currently following MMT, with some of the pieces of the puzzle in place—growing deficits, low unemployment, low interest rates, and low inflation—financed by its strong reserve currency. It seems a bit premature to us to reach this conclusion, and clearly the Fed is showing little inclination to relinquish or modify its role, with Fed Chair Jerome Powell saying MMT is “just wrong.”

There have been other countries that have attempted to self-finance deficits by printing money—most notably Germany in the 1920s, and more recently Venezuela, Zimbabwe, and Greece—and as we know these episodes ended badly.

How do you reconcile the highly charged debate over MMT versus traditional economic orthodoxy, especially when each side can call on its own roster of financial and political heavyweights for support?

Rather than MMT being “garbage” as per Blackrock’s Larry Fink, Bridgewater Associates founder Ray Dalio suggests there could be a middle ground, “a third generation monetary policy.” Dalio has labeled this “MP3,” saying it will involve “fiscal and monetary policy coordination” similar to that prescribed by MMT with some variances.

We remain in the camp that “there is no free lunch,” believing that unlimited money printing eventually creates problems in the form of more inflation, higher interest rates, and a weaker currency. Furthermore, until Washington demonstrates the ability or willingness to exercise fiscal discipline, we believe it is unlikely that MMT moves from theory to practical application.