The free trade agreement between the EU and UK brings relief and challenges. We take a close look at the agreement and potential impact for investors.

After more than four years of negotiations, the EU and UK agreed to the terms of a free trade agreement (FTA). Though it is a barebones deal, this is undeniably good news—a deal avoids the acrimony and upheaval a dreaded “no deal” scenario would have wrought. For goods, it means no tariffs and no quotas, and the deal is a base to potentially build on, if desired.

However, we think a barebones deal is a large step back from EU membership. The Treasury has estimated that a limited free-trade deal such as this one would result in the UK economy being at least five percent smaller over a 15-year period. The agreement ends frictionless trade in goods by creating new non-tariff barriers such as cumbersome documentation and customs declaration, a new, costly, burden for exporters.

Moreover, the deal does not offer much for services. This is important as they account for 80 percent of the UK economy and 50 percent of its exports. When the UK was a member of the EU’s single market, the EU used to recognise the UK’s regulatory systems as “equivalent” to its own, allowing the UK to sell its services to the EU. That is no longer the case. For financial services, a key industry for the UK, where it enjoys a competitive advantage versus the EU, regulatory equivalence has been granted only in some limited areas, such as derivatives and clearing, but it is temporary and needs to be renegotiated.

Thus, while some issues such as those regarding goods have been settled, many more still have to be dealt with. We expect more negotiations to take place, particularly because the deal can be reviewed every five years by both parties. For the UK, the next revision is due after the 2024 national elections. The nature of the trade relationship with the EU may well reappear as a hot political issue.

Beyond agreeing to trade terms with the EU, its largest trading partner, the UK has also rolled over 60 FTAs the EU has with other countries—a notable achievement. The rollovers are usually on identical terms or sometimes slightly less attractive terms than those enjoyed by the EU. Thus, while avoiding a negative impact, the rolling over of these FTAs is not an incremental uplift to trade.

Over the next few years, the UK economy will adjust itself to these new circumstances. The UK already has a number of industries where it has a very strong competitive advantage—finance, technology, and medicine—and it will be important to ensure they continue to thrive in the new environment.

With these ongoing adjustments and a newly imposed national lockdown, we believe the economy will take a hit in Q1 2021. The Treasury is incurring large fiscal deficits to support the economy, and government debt could easily come close to 110 percent of GDP by the end of 2021 according to RBC Capital Markets. The Bank of England will continue to be on high alert—it extended its asset purchase programme late last year. RBC Capital Markets thinks there is a “decent chance” short-term interest rates could go in negative territory. 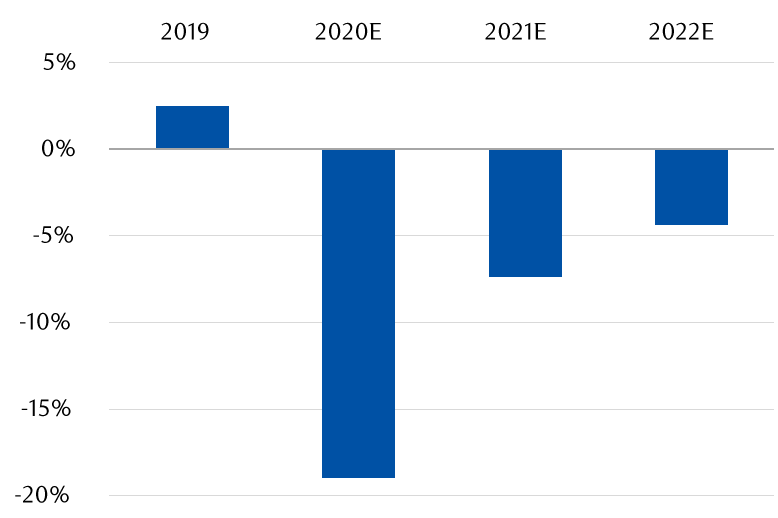 We expect a recovery to take hold midyear onwards thanks to this support and as mass inoculation against COVID-19 allows a gradual relaxation of restrictions put in place to curb its spread. The recovery will likely be led by consumer spending. RBC Capital Markets points out that UK households are sitting on £75–£80 billion of savings, or approximately four percent of UK GDP, they built up during the first lockdown. It expects private investment to respond once the recovery is more firmly established. After UK GDP contracted close to 10 percent year over year in 2020, RBC Capital Markets expects it to go up by about five percent in 2021.

We are cautious on the British pound through 2021 given the expected economic and trade disruption in the short term, combined with the UK’s weak financial position, and the possibility of negative interest rates.

For fixed income investors, we continue to favour corporate credit over government bonds given the backdrop of low yields and flat yield curves. We see cyclical sectors benefiting from the recovery as it slowly starts to gain momentum during H1 2021, in our view. Conversely, the more defensive sectors that have performed well throughout the pandemic may start to lag.

We would hold a Market Weight (benchmark) position in UK equities. Given their underperformance since the referendum to leave the EU in 2016, we believe valuations have become very attractive. The UK signing the EU trade agreement and the reopening of the economy thanks to the vaccine rollouts should be supportive of their continued recovery in 2021.

According to our national research correspondent, using a blended valuation of price-to-earnings (P/E), price-to-book value, and dividend yields suggests UK equities are trading near a 30-year low. On a sector-adjusted basis, UK equities trade on a 20 percent P/E discount to global markets.

Now that an agreement with the EU has been reached, we would expect the “Brexit discount” attached to UK stocks to narrow. A growing number of recent bids for UK-listed companies across a range of different sectors in recent months highlights that global corporates and private equity are finding attractively valued assets in the UK. We would expect investment flows to return now that a “no-trade deal” scenario has been avoided and as the UK is one of global fund managers’ biggest regional Underweights due to the relentless outflows since the referendum to leave the EU.

This, coupled with a cyclical rebound, should underpin UK equities. Consensus expects corporate earnings to bounce back by about a third in 2021, though this would leave them below 2019 levels.

We recommend taking a balanced approach to UK equities. We would maintain our long-standing exposure to quality international companies that can deliver resilient growth across the economic cycle. Consumer Staples and Health Care offer such opportunities. We would also hold UK-domestically exposed stocks, such as select Industrials, Consumer Discretionary, and banks that should benefit from an eventual cyclical upturn once the pandemic subsides and where valuations remain particularly low.

This article was originally published in the Global Insight Weekly on Jan. 7, 2021 with the title "UK 2021—The next chapter".