The escalation in trade tensions shattered financial markets’ summer of calm. We suggest investors buckle up and focus on the fundamentals.

Seemingly frustrated by the pace of the U.S.-China trade negotiations, President Trump said he will slap a 10% tariff on the remaining $300B of U.S. imports from China starting September 1, and threatened he could raise the rate to 25%.

China hit back by targeting two areas important for the U.S. administration: it suspended agriculture purchases from the U.S. and let the renminbi/dollar exchange rate weaken through 7 for the first time in a decade, perhaps calculating that given the poor prospects of a trade deal with the U.S., supporting the Chinese economy through a weaker currency was worth the risk of a presidential backlash. 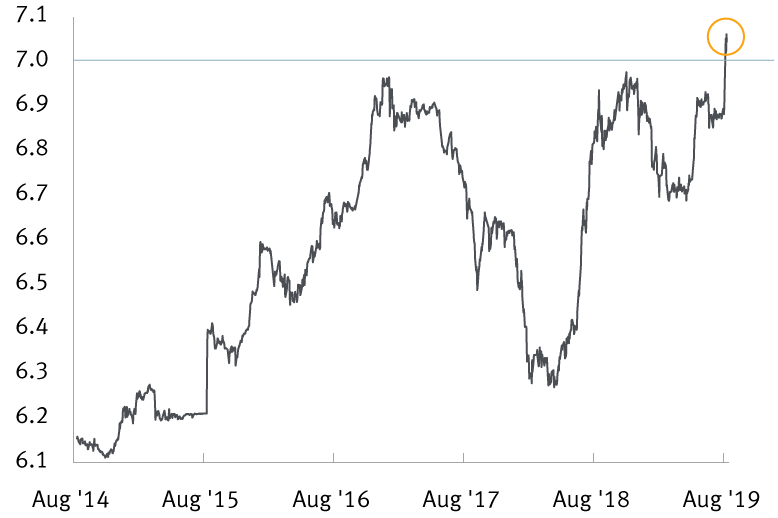 In a largely symbolic gesture of retaliation, the U.S. Treasury Department then designated China as a “currency manipulator” for the first time in 25 years.

The tit-for-tat action rapidly escalated the dispute, rattling financial markets around the globe. But we believe the escalation’s bark is likely to prove worse than its bite.

For the U.S. economy, the impact of the new tariffs might be imperceptible, the equivalent of 0.1% of GDP, according to Tom Porcelli, chief U.S. economist at RBC Capital Markets, LLC. But pockets of the economy could be more affected than this number may suggest, as this final round of tariffs will hit products that the U.S. does not produce. The new tariffs are therefore a tax on U.S. businesses and consumers. 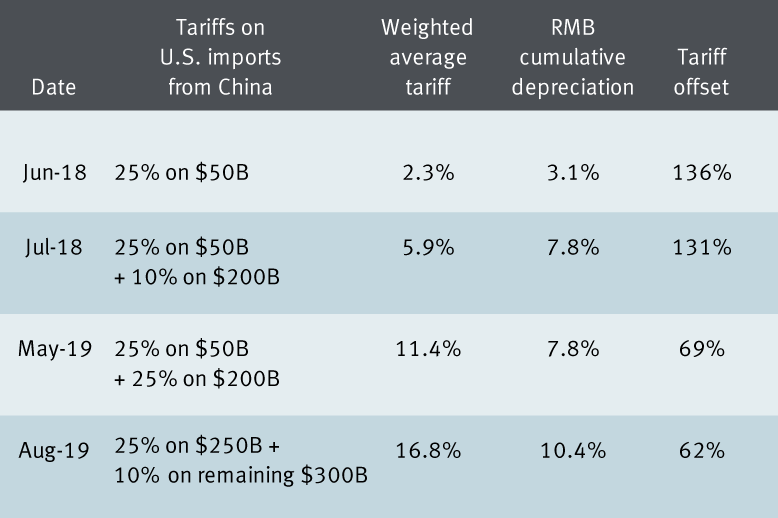 If the 10% tariff is indeed implemented on September 1, the Chinese economy could lose more momentum, though the authorities have levers to pull to mitigate the pain. We would expect more fiscal stimulus, in addition to letting the yuan depreciate to offset some of the impact from additional U.S. tariffs—a strategy deployed by China in the past.

Further currency depreciation is possible over the next few quarters, but in a tightly controlled fashion by the People’s Bank of China (PBoC) so as to avoid a repeat of the 2015–16 episode that led to a destabilizing surge in capital outflows. Moreover, the authorities would not see a significantly weaker currency as desirable, as it would fuel inflation, making life more difficult for the central bank. This was confirmed by PBoC Governor by Yi Gang, who reiterated on August 5 that China would not use the renminbi to deal with “external disturbances such as trade disputes.” Indeed, the PBoC set a stronger daily reference rate than the market expected on August 6, stemming further weakness for now.

Following this spike in trade tensions, we would expect the situation to stabilize as both sides consider the stakes. After all, even if the impact of the trade war on both economies is manageable, it does crimp growth prospects as companies postpone capital spending until there is more clarity. Moreover, the stock market volatility was a clear message to the White House that an escalation could endanger one of Trump’s favorite scorecards, stock market performance.

Both China and the U.S. must realize they have much to lose, in our view. According to a report from the International Monetary Fund in May, should 25% tariffs be levied on all Chinese imports, the hit to U.S. GDP would be between 0.3% and 0.6%, and between 0.5% and 1.5% to Chinese GDP. Therefore, we continue to expect that cooler heads will prevail.

Markets are worried the trade dispute could push the global economy into a recession. Sovereign bond markets made that clear on August 7 after three central banks cut interest rates more than expected (the Reserve Bank of India, the Reserve Bank of New Zealand, and the Bank of Thailand) and after German industrial production fell 1.9% q/q in Q2, suggesting the German economy may have contracted in the quarter. Long-term sovereign bond yields have come under severe pressure, as investors sought safe-haven assets. Among the G10 countries, only the U.S. and Italy now offer a long-term bond yield of more than 2%, though the 30-year U.S. Treasury bond yield is flirting with its July 2016 all-time low of 2.09%.

Bond yields falling around the world 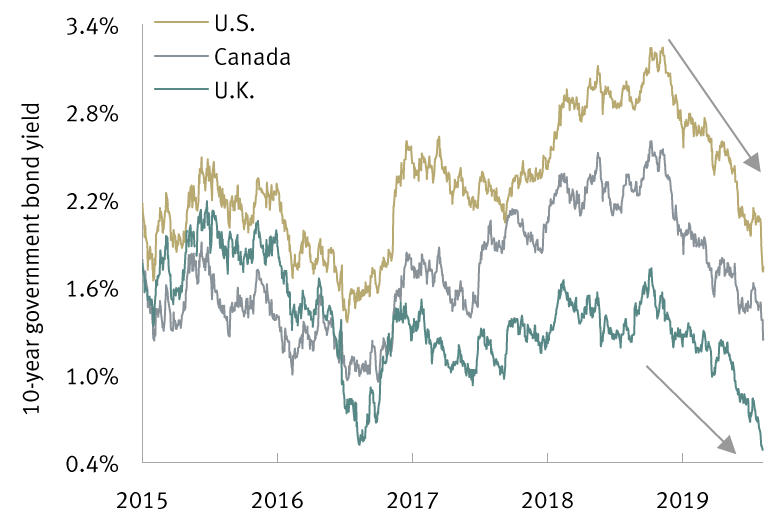 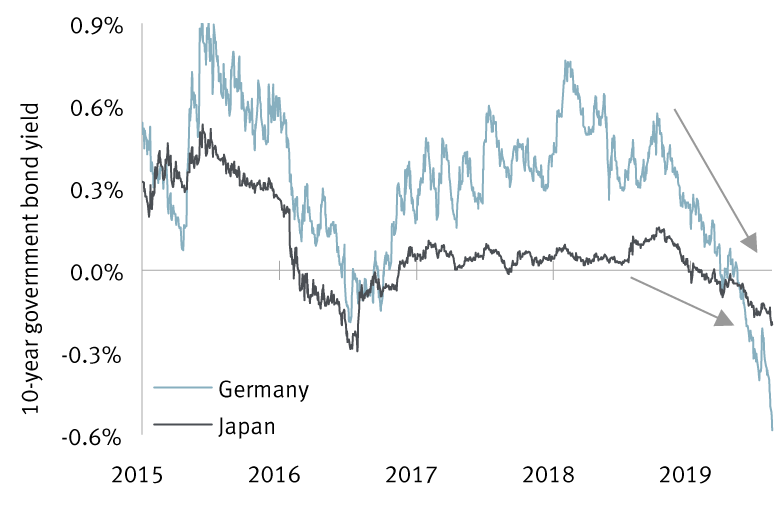 Moreover, the corporate earnings season has been lackluster and guidance is cautious. In the U.S. so far, S&P 500 earnings have grown around 2.7% y/y—meager growth but it’s coming against a very strong 2018. Meanwhile, earnings in Europe/U.K. and Japan have contracted 1% and 8% y/y, respectively. In all regions, defensive sectors have posted positive growth, while most cyclicals have seen growth contract. Consensus estimates are taking the difficult environment into account, with 2019 projections revised down in all regions; 2020 estimates do not seem to have been adjusted yet but will likely have to be downgraded, in our view. 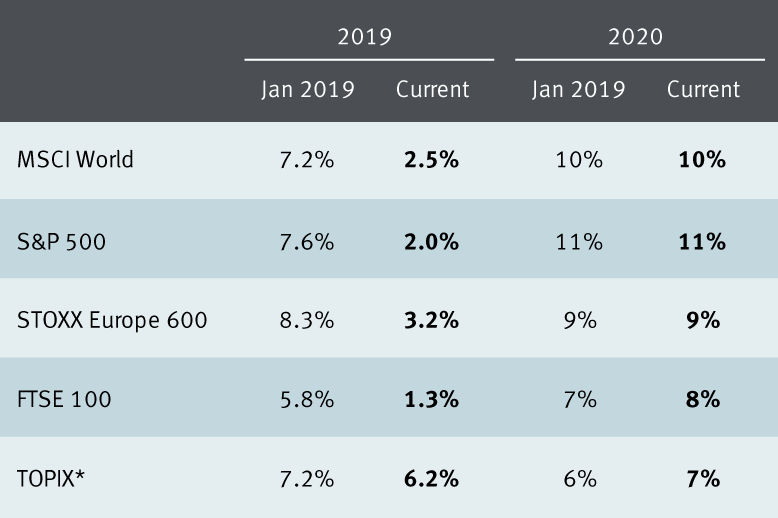 Beyond the trade war, investors have to contend with other geopolitical noise, with the U.S.-Iran standoff likely to escalate (see our recent Global Insight article Collision Course?), as well as the possibility of a “no-deal” Brexit—while not a global event by any means, this could nevertheless destabilize both the U.K. and European economies at a time when both are slowing.

These are all valid concerns, and a defensive bias is warranted (see our Defense mechanisms article from the May edition of Global Insight). With the 10-year U.S. Treasury bond yield falling, the yield curve is inverting further, an important warning sign that a recession could arrive in 9–12 months. However, our other recession indicators have yet to flash yellow. Employment data and leading economic indicators are still signaling that GDP should grow for at least another year.

As long as a U.S. recession does not appear to be imminent, we believe it is too early to become overtly risk averse, given equity valuations have fallen back to more attractive levels after the correction since the July peak. It is time, however, to be increasingly vigilant.