Building out the electric vehicle (EV) charging ecosystem is key to driving widespread adoption of electric cars. We explore the growth potential of this nascent market.

“Range anxiety,” the fear that an EV’s batteries will run out of power before a driver reaches a destination, has diminished in recent years. Thanks to software advances, other technological developments, new battery materials, and improved designs, batteries can pack more energy into each kilogram of weight. In fact, the average battery charge has increased from a range of 70–100 miles (112–160 km) 10 years ago to approximately 250 miles (400 km) today, meaning EVs can now travel much farther down the road without a recharge.

But range anxiety has been replaced with “charging anxiety.” EV drivers now fear running out of power at an inopportune time and being stranded due to an inability to easily, quickly, and efficiently recharge their cars while traveling. A survey from Consumer Reports, an independent product testing company in the U.S., highlights the lack of public charging sites as the leading reason U.S. consumers hesitate to buy an EV.

Solving charging anxiety is crucial to reducing hesitancy around electric cars and accelerating their adoption. EV use is key to climate change mitigation given that transport accounts for close to a quarter of global carbon emissions, with road vehicles generating about 75 percent of that.

Some 6.5 million EVs were sold in 2021, twice as many as in 2020. BloombergNEF (BNEF), an energy research company, expects the total to grow by more than 60 percent this year to 10.6 million. China and Europe are the largest markets, though the U.S. should soon join these leaders. Globally, EV sales represented 13 percent of all auto sales in 2021, with plug-ins accounting for nearly one-third of all cars sold in Europe, and 19 percent in China in Q4 2021. 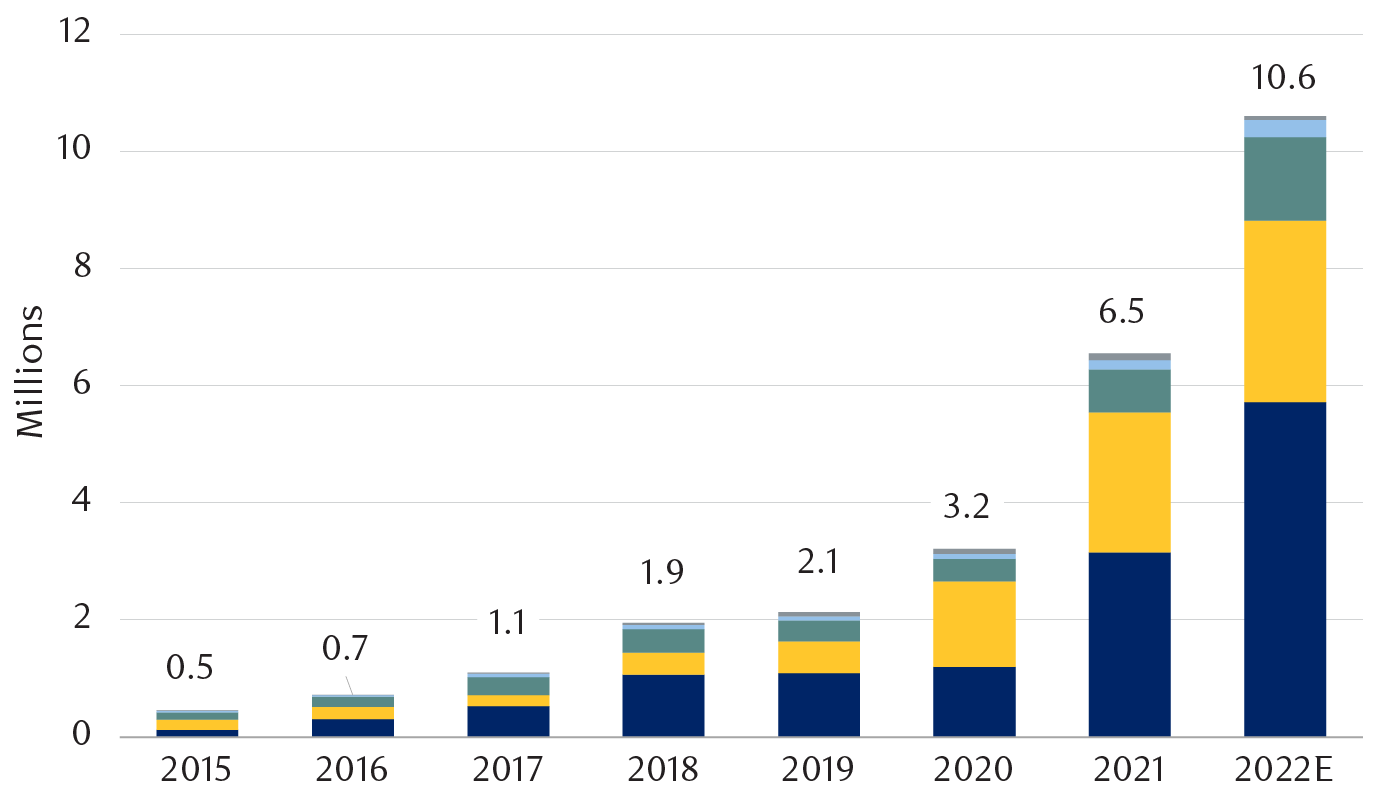 BCG, a consulting group, expects EVs will account for more than 90 percent of light vehicle sales in Europe by 2035 thanks to strict environmental regulations. Uptake in the U.S. and China will likely lag this, though it should still advance rapidly. Progress will likely be far slower outside these three regions, with EVs constituting around one-third of light vehicle sales by then, according to BCG.

Demand for EVs is underpinned by several factors, which we look at in the following sections.

An increasing number of countries have pledged to phase out internal combustion engine (ICE) cars or have ambitious vehicle electrification targets for the coming decades.

For instance, in the U.S., the Biden administration has tightened rules on tailpipe emissions. Fifteen states, including California, Minnesota, and Virginia, have agreed to establish zero-emission vehicle quotas for new passenger cars.

EU legislators drafted policies to reduce the average emissions of all cars in operation by 55 percent by 2030 from 2021 levels, while also stipulating that emissions from new vehicles sold should decrease to zero by 2035, effectively setting an expiry date for the ICE era in Europe. These policies should become legally binding in 2023–24. Both in the U.S. and the EU, governments are incentivizing consumers to switch to low-emission vehicles.

Meanwhile, we’re seeing some car manufacturers moving ahead with plans to electrify their fleets that exceed national policy targets. As a result, with a larger number of models currently available, at some 450, consumers are enjoying a wider choice. Toyota and Volkswagen, the two largest automakers by sales, have committed a combined $250 billion by 2030 to EV and battery programs. Manufacturers are adding their most popular brands and models to their electrification mix.

BCG calculates that the five-year total ownership cost, which includes purchase price, maintenance cost, miles driven, and fuel or electricity costs, should move close to parity of an ICE car by the end the decade. Lower battery costs, which account for as much as 40 percent of the price of the car, as well as greater economies of scale due to higher production should help to narrow the cost gap.

Finally, consumer attitudes are also evolving. In China, the success of emerging manufacturers such as Nio and Xpeng, currently selling 8,000 units and some 15,000 units per month, respectively, together with after-sales service/software upgrades, are convincing consumers of the staying power of these new cars. We’re seeing similar experiences in the West.

There are two main headwinds that may make it difficult for EVs to reach their growth potential. One that’s much discussed today is the availability of materials. The EV industry is being heavily impacted by post-pandemic global supply chain constraints that are affecting the availability of metals needed to make EV batteries, including lithium and nickel, and contributing to the resultant large price increases in the materials. The difficulties are being exacerbated by the war in Ukraine and the sanctions imposed on Russia. In time, we expect new production sources to be developed.

The other hurdle is charging infrastructure. As EV sales increase, demand for chargers increases proportionately. The challenge to widespread EV adoption is to stay ahead of this demand.

EVs can be charged via several different methods.

Currently, most of the charging occurs at home and at the workplace (i.e., private). BCG calculates that in the U.S., 75 percent of the charging is done this way. This is possible because close to 70 percent of households have off-street parking where a charger can be installed (percentages are similar in Canada). With lower availability of off-street parking in Europe and China, 70 percent and 60 percent of charging, respectively, is performed at public charge points.

Two kinds of chargers can be used at home or the workplace to top up vehicles. The slowest type, Level 1, provides up to five miles (eight km) per hour of charging, while Level 2 charging offers 18 miles (30 km) per hour. Charging overnight at home or throughout the day at the workplace can give enough daily power for the average driver, or at least provide an adequate top-up given the average American drives 39 miles (63 km) per day.

But today’s infrastructure is insufficient for long trips and for the new cohort of EV adopters in cities who are less likely to have off-street parking. Hence the need for public chargers.

Public chargers can be Level 2 chargers, such as the converted lampposts or charging pedestals at curbsides now common in London, or be “destination charging stations” that are increasingly found at common locations such as golf courses, shopping centers, and malls.

Alternatively, for long distance travelers, or city taxis that need a fast public charging network, Level 3, or “fast chargers,” can add some 155 miles (250 km) of range per hour charged. This technology is being installed in cities and on highways. Meanwhile, many high-end EV models come with mapping software that indicates where the closest dedicated fast charging network can be found.

One example of a fast charging station is located on the outskirts of London in Essex. The GRIDSERVE Electric Forecourt boasts what it calls “super fast,” reliable charging infrastructure that can deliver clean energy from solar for up to 36 cars simultaneously.

As an aside, this can also foster interesting retail opportunities. GRIDSERVE highlights that the charging station can provide an engaging customer experience with a variety of retailers on site. Customers tend to spend half an hour topping up their batteries—or five times as long as it takes to fill a gas tank—which gives the retailers a captive audience. UK and European highways are already peppered with these types of charging stations. More are planned and the concept is likely to proliferate in North America, in our view.

The number of chargers per EV needed will vary by region depending on local specificities, such as typical traveling distances, population density, and reliance on home charging.

The number of charging outlets in China is increasing faster than in other countries. At the end of 2021, China had 61 percent of all public charging points installed globally.

China requires more public charging infrastructure than the U.S. or Europe as most EV owners are city dwellers who do not have access to off-street parking. At present, China has one charging point per five EVs, compared to one per seven EVs in Europe, and one per 20 EVs in the U.S.

According to BCG, the U.S. will need 1.1 million public charging sites by 2025 and 2.3 million by 2030, up from 113,000 in 2021. The Biden administration is targeting 500,000 public charging points by 2026, with the Infrastructure Investment and Jobs Act likely to fund less than one-tenth of this, leaving the private sector and state governments to fill the gap.

Globally, the number of public chargers will have to expand by 8x to reach over 15 million units in 2030 in order to provide consumers with adequate and convenient coverage, according to the International Energy Agency. BCG calculates that two-thirds of electricity demand for EVs today is private—i.e., from the home or workplace. It forecasts that by 2030 the private-public infrastructure split will be 50-50, including semi-public stations, such as those in supermarket parking lots.

Expanding the public charger network is a complex task because the industry structure has many different layers that require coordination and obtaining permits from several parties along the EV charging value chain.

Preparing sites, installing and maintaining chargers once in operation

Investing in sites and chargers, sourcing electricity from utilities, and selling it to end users at a markup

Running the charge points at stations, including monitoring charger status and coordinating maintenance

Providing charging and other mobility services to end users; app- or charge-card based

In addition, the power grid will need to be expanded to deal with the higher demand for electricity. Moreover, as the electrification of road transport is occurring at the same time as the increase in decentralized and variable renewable energy, power grid distribution will become more difficult to manage. Digital grid technologies and “smart charging” could become important tools to deal with these challenges.

The anticipated growth in the EV charging ecosystem holds great promise for companies throughout the value chain, though as the market is still in its infancy, much change will take place over the coming years.

We highlight below some of the industries that are involved in this theme, their function, and what they must get right to enhance their growth prospects.

Some companies are developing a footprint on their own, such as EV infrastructure company ChargePoint (California-based), Tesla, or General Motors. Others are partnering up, such as the joint venture between BMW, Mercedes-Benz, Volkswagen, Ford, and Hyundai to create an “ultra-fast” electric car charging network. In the U.S., the National Electric Highway Coalition, comprising 17 U.S. power companies, plans to install fast charging stations along intercity routes.

Finally, some energy companies are acquirers, such as Shell who bought Ubitricity, one of the UK’s largest public EV charging networks with plans for both curbside and fast charging connectors; BP and Total have also been scooping up EV charging companies, as have utilities firms.

We believe electric cars and the development of the related charging infrastructure are among the most vibrant spaces within the clean energy theme thanks to the commitments of governments and manufacturers. Much of the discussion today around the obstacles to EVs fulfilling their promise has centered on the shortage of raw materials for batteries. Yet a well-functioning, reliable charging network that can build public confidence is no less important.

Success factors for industries in the EV value chain

Will inflation determine the future of equities?

As policymakers look to tame inflation without triggering a recession, we look for catalysts that could signal the market’s path ahead.