As China pushes on with a regulatory crackdown and battles a COVID-19 outbreak, how should investors position Asia ex-Japan equities in portfolios?

Over the past few months, a whirlwind of regulatory changes has swept across the business and investment landscape in China, putting pressure on Chinese equities. China’s get-tough approach appears to be the new normal given the regulators’ overarching socio-economic aims.

Maintain financial stability: In April, China’s Ministry of Industry and Information Technology announced it would take measures to stabilize commodities prices, crack down on speculation, and encourage smelters and fabricators to hedge on futures markets. Regulators also issued provisions to bring FinTech companies firmly into the fold. This led Ant Group, Alibaba’s FinTech giant, to announce it will restructure as a financial holding company to ensure its financial-related businesses are fully regulated.

China’s move to safeguard against systemic risk started in earnest last year when regulators began tackling unbridled borrowing in the real estate sector, announcing a series of policies that included caps for debt ratios. The property market has been a major driver of economic expansion in China with real estate accounting for more than seven percent of Chinese GDP in 2020, and including other industries related to real estate brings the total contribution into the high teens, according to Evergrande Research.

Strengthen data security and user privacy protection: Concerns that Chinese digital giants were becoming too powerful and mishandling users’ data—a concern echoed in the West regarding its own tech giants—have led the Chinese authorities to clamp down on the country’s powerful tech firms.

For example, Ant Group will have to create a licensed personal credit reporting company as part of its efforts to strengthen protection of users’ data.

Over the past 20 years, eager to modernize, authorities gave tech companies the space to grow and innovate. It is difficult to overstate the extent of China’s achievement as a result, with close to 60 Chinese digital companies worth more than $10 billion.

The education industry in China is massive, with revenues reaching $120 billion, as children compete fiercely to get into good schools and are heavily tutored at an exorbitant cost to parents.

This has created a headache for China, which is facing the demographic challenge of a rapidly aging population following its decades-long one-child policy. The steep education costs are making the Chinese hesitant to embrace the newly relaxed rules that encourage three children per family.

Other sectors have also been targeted, such as food delivery where the authorities decided to impose a minimum wage for workers.

Greater China equities have been under pressure 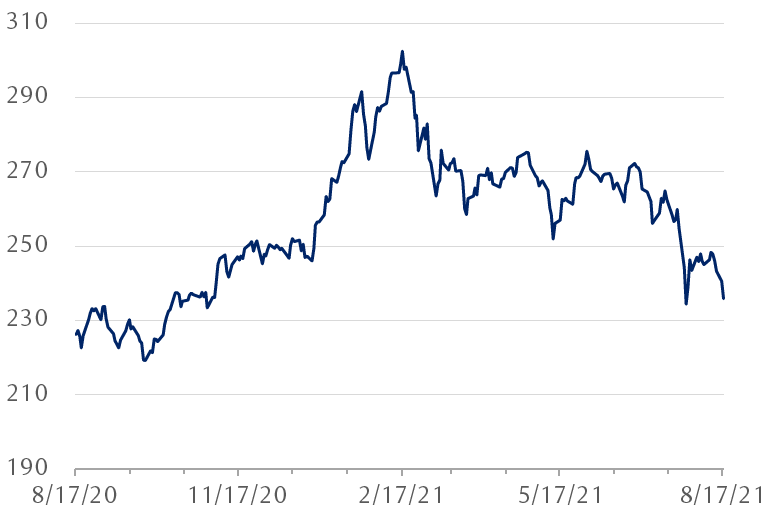 Not out of the blue

While education sector reforms were widely anticipated, their extent, which made the sector virtually un-investable overnight, took markets by surprise and left many investors with the impression that the authorities are unpredictable. Mark Dowding, chief investment officer at BlueBay Asset Management, an RBC group company, points out that these moves are consistent with both the strategic objectives of China’s 14th Five-Year Plan, which was unveiled in March 2021 and outlined the goal of increasing gross national income per capita, and the country’s much-heralded aim of “stable and sustainable growth.”

We believe other areas likely to attract regulators’ attention include health care, online gaming, online insurance, and sectors related to the digital economy.

Regulatory zeal is not the only headwind investors have to contend with. China is battling a COVID-19 outbreak, with the delta variant spreading across more than half the country’s provinces and municipalities—including Beijing—many among the more affluent regions in China. Dowding surmises that China’s current “zero COVID” strategy is coming under increased scrutiny as the delta wave is proving difficult to tame without taking aggressive action to close the economy.

Vaccines that use mRNA technology may become more widely available in China at the end of 2021, leaving policymakers in the unenviable position of having to balance the competing priorities of public health and the economy over the next few months. At this stage, Dowding thinks it remains unlikely that Chinese factory output should be materially impacted, though domestic demand could be dented.

The COVID-19 resurgence is crimping China’s economic growth. July retail sales were hit by the introduction of tough new restrictions to contain the outbreak. Consensus GDP growth forecasts, currently at 8.5 percent and 5.6 percent for 2021 and 2022, respectively, may well come under pressure from these measures and recent relentless flooding. The consensus earnings growth forecast for the MSCI China Index for 2021 is now 15 percent, down from 20 percent previously.

We believe monetary policy may become more flexible to support the economy. Already, the People’s Bank of China (PBoC) cut the reserve requirement ratio, or the amount of cash banks must hold as reserves, by 0.5 percentage points in mid-July, thus effectively freeing up some one trillion yuan ($154 billion) to support interbank liquidity and financial markets. Further PBoC action will likely depend on future economic data, in our view.

In the short term, we believe that lower equity inflows will weigh on the renminbi. But on a six- to 12-month horizon, the imminent inclusion of Chinese bonds in the FTSE World Government Bond Index should continue to attract foreign capital, in our opinion, and underpin the currency. RBC Capital Markets recently revised its year-end USD/CNY estimate to 6.45 (previously 6.40) and expects the currency to barely appreciate in 2022, to reach 6.35 at the end of next year.

The combination of Chinese regulatory zeal and the increased threat from the delta variant has led us to reduce our longstanding recommended allocation to Asia ex-Japan equities to Market Weight from Overweight. We believe this is an appropriate stance given valuations have come down and are below historical averages. The MSCI China Index is currently trading at 13.9x the 2021 consensus earnings estimate versus its five-year average of 15.7x while the MSCI AC Asia ex Japan Index is at 14.5x current year earnings versus its five-year average of 16.2x.

The key signals we are watching for before considering a more positive stance include: major FinTech companies fully complying with regulatory requirements; Chinese companies resuming their onshore and offshore IPO plans; major digital platforms announcing measures to improve social benefits for workers; and leading tech companies opening up their systems or services to each other.

It’s not a surprise the market has cooled. While there may be more volatility due to many headwinds, we think the bull market can ultimately regroup.

As the recovery's momentum builds, what does a normalizing global economy hold in store for financial markets?