Last week saw a concerted effort by Federal Reserve policymakers to push back on the idea of a near-term policy pivot, a scenario where economic weakness leads the Fed to begin cutting rates as early as mid-2023. So far this month, a total of 10 Fed officials have publicly spoken against the idea, with some explicitly rejecting it and others implicitly attacking it by reiterating the central bank’s firm commitment to continue the inflation fight until it is demonstrably won.

Despite the breadth and depth of the Fed speakers taking this position, markets largely shrugged off the talk; following the speeches, interest rate futures continued to price the Fed switching to rate cuts next year, with only a modest three basis point (bps) shift in the predicted overnight rate for November 2023. The real move in policy projections only came after employment and inflation data showed little impact from the Fed’s policy moves so far: payrolls continued to grow, the unemployment rate declined, and inflation remained near four-decade highs.

We believe last week’s events point to two likely truths for Fed communication and interpretation going forward: first, that markets will largely look to data, not speeches, to gauge the likelihood of the Fed staying hawkish; and, as importantly, that Fed policymakers will increasingly emphasize maintaining restrictive interest rates for longer periods as a key means of fighting inflation. 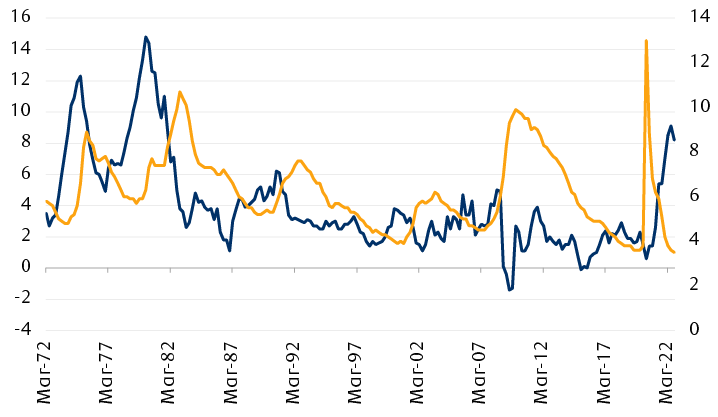 Line chart showing for the period of March 1972 through September 2022, the year-over-year percentage change in the Consumer Price Index (CPI) and the U.S unemployment rate. The data shows the CPI increasing at nearly the fastest pace in 40 years with a final data point of 8.2% and that unemployment is near the lowest level in the same time frame with the Sept. 2022 data point of 3.5%.

We see little chance of a shift to more dovish rhetoric from the Fed in the near term. Part of this is institutional: the Fed’s mandate is to maximize employment consistent with stable prices. Officials should be talking exclusively about tighter rates and more restrictive policy with unemployment near historic lows and inflation near four-decade highs. Embracing early pivot talk also risks the central bank’s credibility, in our opinion. The Fed took its shot at policymaking based on predictions with its transitory inflation argument. That failed. We believe to try a dovish argument again before the data is unambiguously supportive would call into question the seriousness of the Fed’s commitment to price stability.

Personalities also play a role in the decision. Paul Volcker, who served as Fed chair from 1979 to 1987, is widely regarded among the preeminent central bankers for his role in reducing U.S. inflation from 14.8 percent to under three percent in a little over three years. His reputation has not suffered to any extent that we can see by a discussion of how central bank policies of that era may have been unnecessarily restrictive. Central bankers with an eye toward history and a desire to leave the institution at least as well off as they found it are unlikely to find themselves drawn to early dovish talk.

Powell looks to channel the early days of Volcker

Inflation evolution by month of tenancy as Fed chair 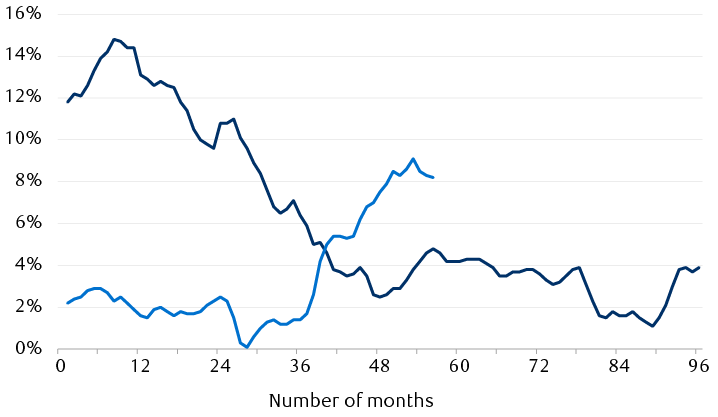 Line chart comparing the level of inflation by month between the chairmanships of Paul Volcker and Jerome Powell. It shows inflation peaking at 14.8% but declining steadily 12 months after Volcker took charge. Under Powell, inflation increased beginning in year three and peaking at 9.1% before recently declining by a small amount to 8.2%.

Since the Fed has little reason to sound anything other than hawkish, investors have largely built such commentary into their calculations. One result is that market moves from individual speeches are relatively muted, as we saw last week.

Data, on the other hand, is becoming ever more consequential, and we believe markets will likely look to price a pivot scenario once they see even precursors of significantly slowing inflation, such as shifts in the Consumer Price Index, rising unemployment, or declining consumer sentiment and spending.

One notable and in our view sustainable change in Fed communication has been the emphasis on how long rates will remain at or near the cycle highs. Previous policy discussions had focused on the speed of hikes and the terminal rate, but the more recent speeches are targeting the length of time rates remain elevated.

We would not be surprised to see this rhetorical shift continue and even strengthen, as we see two strong policy arguments against pushing overnight interest rates much beyond the roughly 4.9 percent level priced into fixed income futures.

Continuing to push short-end rates higher also creates problems for the Fed in the future, in our view. If inflation comes down significantly next year, the Fed will likely want to reduce interest rates, particularly if the economy has simultaneously slid into recession. Managing that transition toward a neutral policy rate is obviously easier if the Fed is starting with overnight interest rates at 4.5 percent instead of six percent. We believe a slower glide path on any eventual rate cuts will also help the central bank avoid an inflation and interest rate see-saw, where policy rate mistakes on one side are matched by errors on the other, leading to yo-yoing interest rates.

For investors, a Fed focused on the duration—and not the elevation—of short-term interest rates creates a few potential opportunities, in our opinion. One could be short-term Treasury obligations. If the Fed is going to stop hiking at or near currently expected levels, we believe government bonds with maturities in the next 1–2 years would likely outperform those with longer maturities, as much of the policy implications appear to be already priced into the shorter bonds.

Longer term, we believe growth assets are another potential beneficiary of an emphasis on communications over hikes. Undoing a rate hike requires formal central bank action and is a relatively clunky move, usually 25 bps at a time. A soft verbal commitment to “do what it takes” is much easier to unwind; it only takes a speech or two.

So while risk assets are unlikely to find much comfort in Fed rhetoric or actions in the immediate future, the relative ease of unwinding a communications-driven policy move could at least bring faster relief, if inflation does come down in the next 12 months.