RBC Global Asset Management’s chief economist surveys the state of the trade war and looks at why the U.S. is targeting China’s high-tech capability.

Markets have recently recoiled at the deterioration of U.S.-China trade negotiations. The U.S. has already imposed several rounds of tariffs on Chinese imports; China’s response has been generally proportional, hitting U.S. exporters with tariffs of similar magnitude—though strategically targeted at different sectors.

Anti-trade populism was a central element of President Trump’s campaign platform, and this helps to explain the various efforts the White House has made to renegotiate America’s trading relationship with the world. 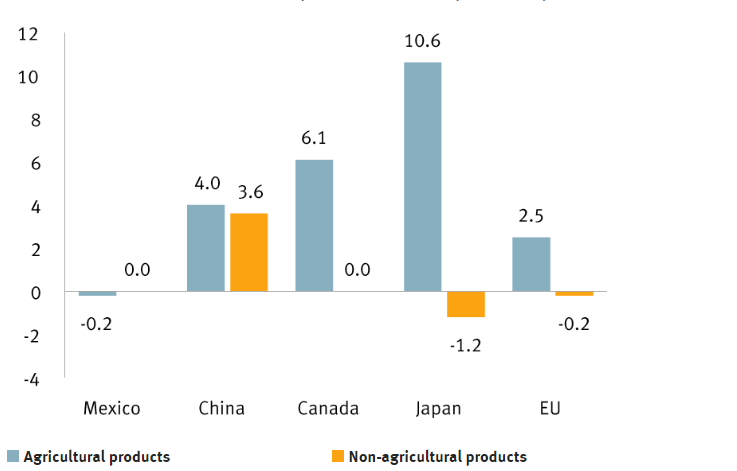 The U.S. is right to want better trade deals with partners.

Another motivation to renegotiate trade deals is less savoury, but no less valid: like other big countries, the U.S. has the ability to throw its weight around, extracting favourable deals in exchange for access to the largest economy in the world. The U.S. can reasonably aspire to trade deals that are better than strictly “fair.”

However, not all of the logic behind the push to renegotiate was sound. For instance, far more U.S. manufacturing jobs have been lost to automation than to overseas factories. Thus, the great bulk of “lost” manufacturing jobs will not be recovered through new trading arrangements.

The U.S. goal with all of this tariff pressure was to convince China to implement economic reforms that would create a more symmetrical trading relationship between the two countries, not only in terms of the volume of trade in both directions but, more fundamentally, of access to one another’s markets: reducing the extent of China’s capital controls, halting a pattern of forced technology transfers from western companies to their Chinese partners, and limiting the special advantages enjoyed by China’s many state-owned enterprises.

A month ago, these negotiations were beginning to look quite promising. But today, all of the positive talk has vanished, and the two countries are at loggerheads again. The U.S. maintains that China had initially agreed to legislate a wide range of economic reforms, but that its latest edits to the proposed agreement have backtracked on many fronts.

We have always been of the opinion that any deal would be largely superficial and fail to fully address underlying frictions between the world’s two economic superpowers, but even that half-victory now seems elusive.

The U.S. has followed through on a long-delayed threat, raising its tariff rate to 25 percent from 10 percent on the $200B of Chinese products it initially targeted. It has also threatened to introduce a new set of tariffs on another $300B of imports from China (at a rate between 10 percent and 25 percent), potentially doubling the net impact again.

China has retaliated with new tariffs of its own on another $60B of imports from the U.S. (also at a rate between 10 percent and 25 percent). 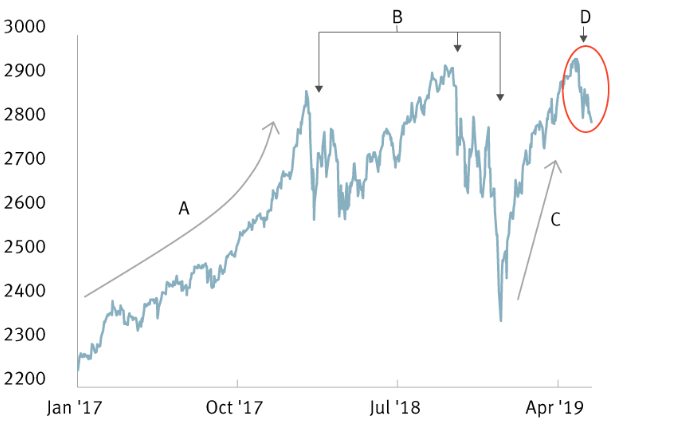 If the trade dispute intensifies, equity markets could pull back further.

Financial markets are naturally unhappy with all of this. Recall that the equity market rebound since the beginning of 2019 has been driven by three central macroeconomic factors: interest rates had stopped rising, economic growth was starting to stabilize, and protectionist woes were fading. The last of these is no longer the case, and so the market recalibration is unsurprising.

Protectionism and its discontents

Protectionism tends to be an economic negative for a number of reasons. By far the most important is that the cost of things goes up—in part because importers must pay more, in part because domestic manufacturers encounter less competition and so raise their prices. This doesn’t capture the full range of protectionism’s ills, but it is the main component.

On the positive side, the government gets to collect tax revenue from foreign companies, and some domestic firms thrive when the pressure of foreign competition is reduced.

But on the whole, the negative effects usually outweigh the positive, and this is nearly always the case when foreign countries retaliate in kind with their own tariffs.

The table below gives our (very) rough sense of the likelihood of various scenarios playing out, and the approximate economic impacts. There isn’t much precision to this analysis and it is also a moving target as tariffs and threats are lobbed back and forth. Furthermore, even if a certain tariff is levied, it matters enormously whether the tariff remains in force for five weeks or five years.

Trade scenarios tilt toward “Negative.” Our estimate for the economic hit under the “Negative” scenario is around twice the level it would have been had tariffs not gone up recently.

After a brief interlude of optimism, it seems the “negative” scenario is most likely to occur. This points to economic damage to the U.S. of between 0.3 percent and 0.6 percent GDP should current tariffs persist, with the Chinese GDP hit between 0.4 percent and 0.8 percent, assuming no auto tariffs. By way of comparison, this is around twice the damage we would have anticipated if the tariff rate hadn’t recently gone up. Conversely, it is about half the damage we expect if the U.S. delivers on its threat of tariffs on another $300B worth of Chinese imports.

We have reason to think current models may fail to capture the full extent of the damage. For example, the welfare loss to households and businesses could exceed the cumulative economic damage because the government sector frequently comes out ahead thanks to the extra tax revenue it is able to collect via tariffs. That means other economic sectors are left even further behind.

Furthermore, the equity market’s reaction to shocks such as these tends to be several times larger than the effect on the economy as a whole. Therefore, it is not unreasonable to expect a market move of multiple percentage points in response to a protectionist shock that only knocks half a percentage point off economic growth.

Of the non-tariff weapons in the U.S.-China trade dispute, corporate attacks have been the most obvious means of cross-border antagonism.

Huawei, in particular, finds itself the centre of unwanted attention. Not only has its CFO been charged with fraud by U.S. authorities and deployment of its 5G products blocked in the U.S. and several other developed nations, but U.S. companies must now obtain government permission to do business with the company—effectively blocking further commercial activities. Huawei has likely been targeted for several reasons:

The obstacles Huawei faces could well be lessened or removed by a trade pact between the two countries. Setting a precedent, the restrictions placed on ZTE by the U.S. were eventually lightened as a favour to the Chinese president—a decision based entirely on political, rather than legal, considerations.

U.S. actions against Huawei could backfire if they remain in place for too long, because the longer China is denied access to U.S. technologies, the more likely it is to replicate such technologies itself. Similarly, any loss of access to the U.S. dollar clearance system would likely accelerate the creation of a competing Chinese clearance system, undermining America’s ability to exert the same clout in the future.

China also possesses the ability to hit the U.S. via non-tariff means, be it selling U.S. Treasuries, restricting the sale of Chinese-made iPhones or similar prestige products, or even halting the export of the rare-earth elements (on which it has a near-monopoly) that are needed to produce modern electronics.

The loss of economic output from newly elevated tariffs and aggressive non-tariff actions could yet blight the green shoots that have recently sprung up in both the Chinese and U.S. economies, unless cooler heads prevail. On the other hand, it bears repeating that none of the impacts described here are enough by themselves to drive the U.S. or China into recession, and that the damage will be spread over several years rather than arriving all at once.

Furthermore, we believe the Trump administration will be anxious to sustain economic growth in the run-up to the 2020 election. For its part, China will be similarly motivated given its recent fiscal stimulus to stabilize growth. Perhaps these incentives will help the two countries secure a deal after all.

While we see a glimmer of hope in a possible meeting between Presidents Trump and Xi at the G20 Osaka Summit in late June, our base-case forecast is now that the latest volley of tariffs will stick.

Ultimately, the key to resolving the two nations’ differences may be how long China and the U.S. are willing to tolerate the economic pain of tariffs.