We look at the knock-on effects of the pandemic for the world economy, and what sort of market impact investors should brace for.

As Wuhan Coronavirus (2019-nCoV) spreads, capturing more public attention about the many uncertainties and risks associated with the virus, financial markets have reacted. The increases in infections and deaths have pressured equity markets worldwide and boosted safe-haven sovereign bond prices. The flight to safety, for example, briefly pushed the 10-year Treasury yield down to 1.53 percent, a six-month low.

The economic and market impacts stemming from the outbreak could be material, especially for China and global industries that are most affected, such as travel and segments of transportation. But ultimately the impact should be transitory, in our assessment.

Compared to the 2003 SARS outbreak, Chinese authorities and other countries appear better prepared to deal with public health crises, underscored by improved transparency, pre-emptive measures to restrict travel, and a worldwide push by scientists to develop treatments and vaccines.

At this stage, we don’t think the outbreak warrants making major changes to investment portfolios for long-term investors. But we would refrain from putting new money to work in equities, particularly in emerging markets, until at least the number of new cases and fears surrounding the spread of the virus have peaked.

Thus far, the newly identified pathogen is largely concentrated in mainland China, but has reached other parts of the Asia-Pacific region, Europe, North America, and the Middle East.

Compared to SARS in 2003, this coronavirus seems to be more contagious, though less fatal, in these early days.

Fortunately, the convergence of DNA sequencing, machine learning, and gene editing may make these pathogens easier to identify, and possibly, to control. Unlike in 2002–03 when China suppressed information about SARS for three to four months, Chinese researchers sequenced 2019-nCoV within days of the outbreak, yielding key insights into the transmission and prevention of the disease. The Chinese government quickly provided the full genome of the pathogen to other governments, and to global health databases and organizations.

RBC Global Asset Management Inc. Chief Economist Eric Lascelles points out, "Most countries have better protocols in place today to screen, treat and limit the spread of serious outbreaks. Many of these protocols were inspired by the mishandling of SARS.”

As of this writing, 2019-nCoV has killed 171 people (all in mainland China), or roughly two percent of the 8,236 cases identified, according to Johns Hopkins University, which is tracking the spread of the virus within its Center for Systems Science and Engineering (CSSE). This compares to the nine percent to 10 percent fatality rate in the roughly 8,000 SARS cases identified in 2003. Regularly updated Johns Hopkins CSSE data can be accessed here.

However, the bulk of people who have been diagnosed with 2019-nCoV have yet to be officially categorized as having recovered, and scientists indicate the virus has a longer incubation period than SARS.

The economic impact of SARS was largely concentrated in China, both on the mainland and in Hong Kong. China’s GDP growth slowed by two percentage points on an annual basis during that time, according to Lascelles. Canada’s economy briefly shrank during the SARS episode, as infection rates were higher than in many other developed countries, and because the U.S. was not firing on all cylinders at the time. These economies quickly rebounded soon after the worst of the epidemic passed. 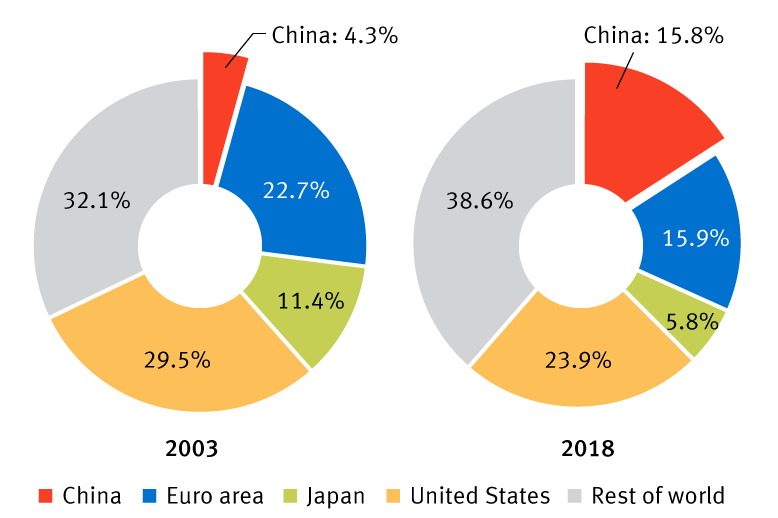 “This episode will likely follow a similar trajectory—there will likely be a palpable hit to China’s economy but this should prove short-lived, in part because China will likely deliver more economic stimulus, in part because conditions should almost immediately normalize as soon as the disease abates,” Lascelles wrote. He added, “For the moment, we have not adjusted our global growth outlook. In fairness, whereas we had contemplated a growth upgrade for China, that may now be sidelined.”

What’s “different” this time is that China contributes a much greater share of global economic activity today than it did compared to 2003, as the charts show. So any temporary economic pain in China could be a greater headwind for global growth, in our view.

Tom Porcelli, RBC Capital Markets, LLC’s chief U.S. economist, does not believe the SARS period is a useful analogue for the effects of the coronavirus on the U.S. economy. There were other issues holding back the U.S. in 2003, such as overall weakness stemming from the aftermath of the 2001 recession, and the temporary disruption caused by the U.S. and allied invasion of Iraq, both of which overlapped the SARS epidemic. He points out that this go-around, U.S. economic fundamentals are much sturdier.

How exposed are markets?

Whether coronavirus will continue to pressure equity markets will depend on the pace at which the virus spreads and the associated death rates. Similar to the economic risks, we would expect that the markets in countries most impacted would continue to experience the greatest pullbacks.

Lascelles wrote, “To the extent the incubation period really is two weeks long and transmission truly is possible asymptomatically, we flag the risk that the outbreak proves worse than currently imagined. But no less relevant is the observation that in every prior episode, those lows have ultimately represented buying opportunities.”

Regarding the U.S. equity market specifically, RBC Capital Markets, LLC Head of U.S. Equity Strategy Lori Calvasina said, “We think coronavirus fears could contribute further to U.S. equity market volatility in the short term if they continue to build, since this poses a risk to the modest improvement in corporate optimism that has resulted from the completion of the Phase 1 trade deal with China. The bigger issue here is that investors could at least temporarily start to doubt the ‘hope trade’ that has propelled U.S. equities higher since last fall. That market move was driven by the anticipation of a positive inflection in global economic conditions.”

While the prevailing period of heightened anxiety and risk aversion will eventually fade, if the number of new cases remains on the uptrend, we would expect to see further volatility and downside in equities in the near term, more concentrated in those markets and industries most affected by the disease. During past viral outbreaks, the inflection point for market sentiment typically arrives when the number of new cases has peaked.