Business owners in times of crisis: How women can chart new careers

Business owners in times of crisis: How women can chart new careers

Three female entrepreneurs who saw opportunity in inopportune times were rewarded for the risks they took.

When the global COVID-19 pandemic forced chocolatier Gail Ambrosius to temporarily close her Madison, Wisc.-based shop, she improvised. Her team used social media to keep loyal customers updated on seasonal flavors, offered curbside pickup and made no-contact deliveries. But the pandemic wasn't the first time Ambrosius had to switch gears to chart a successful course. It's a lesson she first learned more than 15 years ago when she made the leap to launch her dream business.

Her path parallels those of other women who have decided to change course in their careers, build a business and do things on their terms, even as life threw some curveballs.

Second acts in a career often stem from major life events, says Angie O'Leary, head of Wealth Planning for RBC Wealth Management–U.S. Divorce, the death of a spouse, inheriting wealth or losing a job can all be catalysts. “It's a motivator to really take a look at what you want the rest of your life to look like," she says.

Ambrosius always wanted to make chocolate for a living, but she initially heeded the voices of people who told her she couldn't do it. Instead she chose a “safe job" with good benefits as a cartographer for a state government agency. After a decade, she was laid off. The divorced, single mom of a school-aged son decided it was time to pursue Plan A.

While making plans for her new venture, Ambrosius ran into an acquaintance. “He said, 'Are you sure you want to do this? You've got a house and a child. You could lose everything,'" remembers Ambrosius. “That was like throwing down the gauntlet, and I thought, 'You just wait.'"

Embrace some level of risk

“That's part of what I see in my generation of women, which is the younger Baby Boomers," O'Leary says. “We're highly educated and we've been in our careers for a very long time, or we've been home with the kids and now it's time for us to focus on our careers. We're going to live a long time, and we get another opportunity to take on a new role."

Ambrosius went all in on her new venture. She studied chocolate-making in France and enrolled in courses at the University of Wisconsin–Madison's Small Business Development Center to put together a plan. She connected with a mentor, a former banker who reassured her that an $18,000 loan wasn't too risky. She wasn't so sure at the time.

Gail Ambrosius Chocolatier now produces thousands of pieces of chocolate by hand every day during peak seasons. Ambrosius, whose now-grown son is her business manager, says they've learned important lessons about prioritizing and production schedules during the pandemic. “I think the business will come out of these unprecedented times running more efficiently than ever before."

Connect your passion and professional goals

After working 15 years as a journalist, Theola DeBose left her career at The Washington Post, which included covering the war in Iraq, because she longed to be part of solving problems rather than writing about them.

She first took a job leading communications for the DC Public Charter School Board and served as communications director for the National Endowment for the Humanities under President Obama. Since then, she's designed an online course, called JSkills, focused on helping other former journalists reframe their skills for prospective employers. “When COVID-19 hit, I knew I wanted to help people who may have been on the sidelines before the coronavirus thinking about a career change," she says. 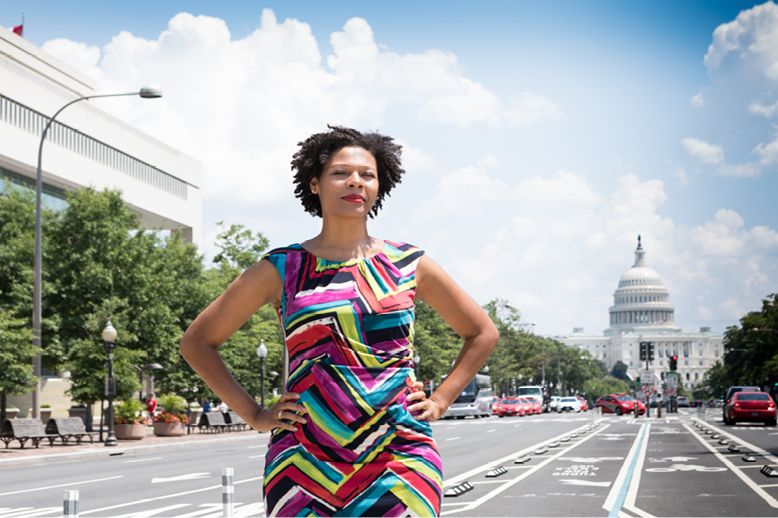 Theola DeBose is pictured in Washington, D.C. Credit: Cheriss May

DeBose recently launched a weekly webinar series that includes live résumé reviews. After the death of George Floyd and the continued fight for racial justice, she created an online course called Raise Your Voice to teach Black changemakers how to write and publish op-eds and other opinion pieces. “I knew I had to put my journalism and PR skills to use to center Black voices and create change," she says.

DeBose plans to use technology to expand her company to create a platform to assist career professionals across a range of industries. “Confidence and clarity is what holds everyone back. You don't feel like you have what it takes and you're not sure what to do next,” she says. “But it's about letting yourself see that you already have the foundation of so many amazing skills that can transfer to something new.”

For DeBose, launching a new business venture also meant changing her mindset about money, one developed from growing up as the child of Haitian immigrants who worked hard to provide for their children.

“It was a wonderful, amazing lesson in following your dreams and then succeeding," she says of her childhood. “At the same time, it gave me the idea that money is something you have to sacrifice for, or that money is difficult."

This is known as a money script. Everyone has one, says O'Leary, and it's unique to childhood experiences with money. Money scripts heavily influence how individuals view money and make financial decisions as adults. That's why O'Leary helped develop a workbook as a tool to help women examine their approach to finances. “They haven't really thought through, 'What is my mindset around money, and how was that created?'"

For her part, DeBose says her relationship to money is much closer now she's trying to grow her business. “For me, it's about interacting," she says. “If I brush my teeth every morning, I can check my bank account balance every day, and then not have such fear or emotion around it."

Be ready to learn and pivot with change

Andrea Robinson made her first major career pivot years ago. While working for an investment banking firm in New York, she volunteered to pour wine at the International Wine Center on evenings and weekends. On a night that featured champagnes, Robinson remembers being “immediately bewitched."

Robinson, now an award-winning Master Sommelier, who picks the wine list for Delta Air Lines and created a line of wine glasses called The One, has seen the industries she works with devastated by the COVID-19 pandemic.

But she's also found “unexpected silver linings" in her new efforts to connect with and educate people about wine through through “Andrea Live!,” which she broadcasts live on her website and on social media from her Napa Valley kitchen. Robinson shares everything from wine pairings for the comfort foods she's cooked with her family, to simple advice including how to open a bottle of wine.

She learned early on that most people dream of finding a profession that doesn't feel like work, but they don't always find the courage to make the leap. When she informed her department head at the investment banking firm she was going to follow her heart and quit, she was surprised to learn he was an enthusiastic wine collector. “Instead of shooting daggers at me, he said, 'Ah, I wish I had the guts to do the same when I was your age.'"

The shifting landscape of global wealth

Future-proofing prosperity in a time of upheaval.