This report is part of the “New normal, new opportunities” series, in which we examine secular trends in a post-COVID-19 world. The series will cover a range of themes that are emerging as a result of social distancing, the work-from-home imperative, health care developments, corporate implications, and broader societal change. We believe identifying these trends and understanding their investment implications will be critical to navigating the road ahead. Additional reports will be released over the next few months.

The pandemic likely accelerated an existing trend in the world economy—that of a slowdown in globalization. This was arguably the key driver of global growth for a generation, but it now appears to be a victim of its own success.

Between the end of World War II and the onset of the global financial crisis in 2007, total annual global exports as a share of the aggregate global economy increased from roughly five percent to 30 percent. This was driven by countries increasingly taking advantage of their comparative strengths in trade, either low cost, low regulation regimes or high value-added products and services. This served as an efficient mechanism to improve living standards in emerging and developed nations—wages increased in the former and affordability of products and experiences improved in the latter.

More than a speed bump in world trade growth?

Total exports as % of global economy 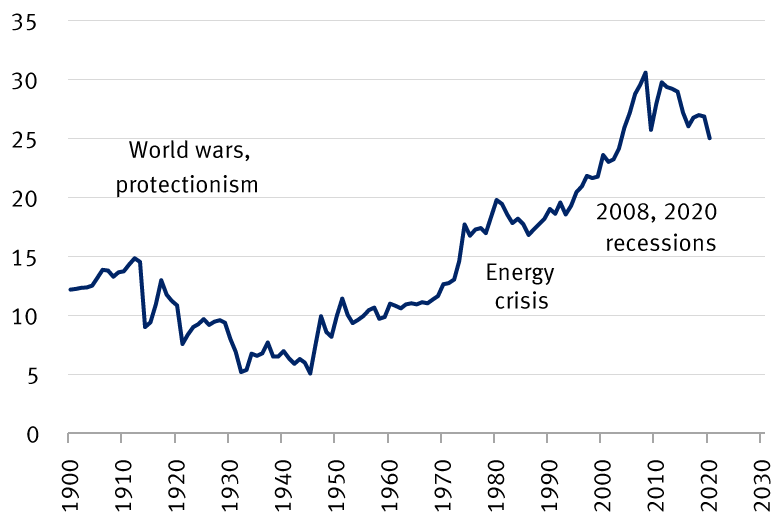 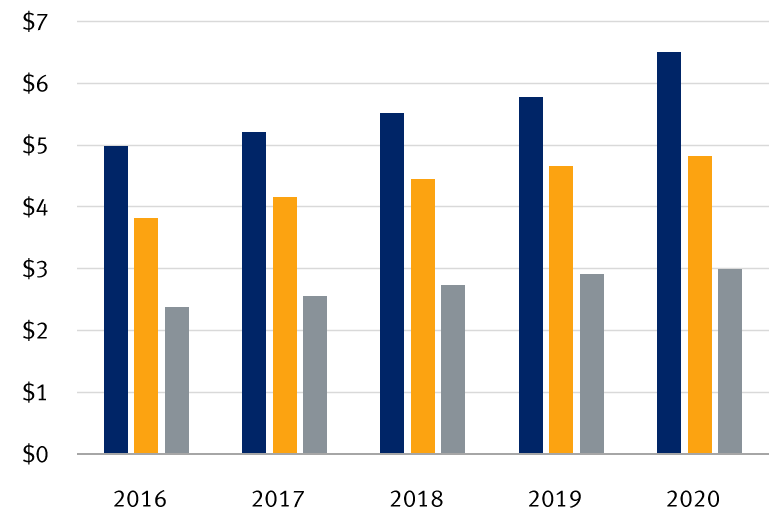 There were a few speed bumps along the way caused by an over-reliance on certain regions for key inputs (witness the energy crisis in the 1970s), but overall, globalization was more of a blessing than a curse over that period.

But as efficiencies in global trade were continually exploited, by the start of the 21st century job losses and income inequality accelerated in developed nations. These tensions fanned the flames of populism and prompted economists to surmise that globalization had reached its limit.

The pandemic underlined another vulnerability in the system. Without open borders, international trade languishes. And the interconnectedness of global supply chains becomes a vulnerability if several links in that chain break at the same time.

One area where the retreat of globalization clashes with the global response to COVID-19 is in the development of a vaccine. During previous pandemics, academic cooperation across countries combined with multinational organizations to speed the path of vaccine development. However, in the current environment, the instinct of typically populist politicians globally has been to prioritize rapid national development of home-grown vaccines. While this may only serve as a speed bump to the eventual roll-out of a vaccine, at the margin it may prolong the economic recovery.

In contrast, we note that the eurozone is one area where the pandemic appears to have strengthened cross-border cooperation. Recent measures to support the more impacted southern countries of the bloc have pushed the eurozone closer to the federalization of fiscal policy, as Germany appears to have performed a U-turn in its attitude toward bailing out less economically efficient members of the group. At the margin, this may act as a tailwind to European risk assets.

And although economic globalization may diminish further due to the pandemic, we don’t believe the status of the U.S. dollar as the world’s reserve currency is at risk, at least over our medium-term time horizon. While the greenback’s importance may fade slightly at the margin, its global dominance is unlikely to be challenged given the depth and liquidity of its bond market, and the dearth of competitor currencies that could assume its mantle. This should not be confused with a bullish view on the dollar, as we believe valuation considerations and increasing political risk in the U.S. may pressure the currency over the near term.

How to play the fading globalization theme?

We believe companies that already have well-established international franchises and end users in faster-growing markets should benefit, as we expect less pressure from future competitors attempting to copy their scale and reach. These include global pharmaceutical companies and multinationals with an established presence in regions with a growing middle class. Additionally, we believe countries that offer an option for companies to diversify their established supply chains may benefit from increasing country-specific trade tensions. And finally, those regions where the pandemic may have strengthened cross-country cooperation may emerge more quickly from the current global recession.

This article was originally published on August 12, 2020.

The COVID-19 upheaval and the future of travel and leisure

Travel and leisure habits are likely to be permanently impacted by the pandemic. But some themes will persist and others may fill the leisure gap.