The Fed meeting this week came and went with no major changes to policy, little in the way of new details with respect to the Fed’s recently announced two percent average inflation targeting regime, or even much in the way of forward guidance. All of which was largely expected by markets as policymakers had been vocal in recent weeks about the lack of need to do more in way of policy stimulus at this juncture.

The star of the show was the Fed’s first update to its economic projections since June amidst an economic recovery that has already progressed at a faster clip than policymakers had expected just three months ago, and which now include economic and interest rate forecasts through 2023.

Of particular note was the faster pace expected for the labor market recovery. The Fed estimated year-end unemployment of 9.3 percent following the June meeting, but policymakers now project 7.6 percent; it currently stands at 8.4 percent as of the August payrolls report.

How long could it take for the labor market to return to pre-pandemic levels? The Fed sees the unemployment rate returning to four percent by the end of 2023, just below the 4.1 percent rate the Fed estimates to be “full employment.” On the inflation front, policymakers expect sub-two percent for the next couple of years, rising gradually to two percent by 2023.

And with maximum employment and two percent inflation expected to be achieved by 2023, the Fed’s subsequent rate forecast for 2023 is … zero percent. 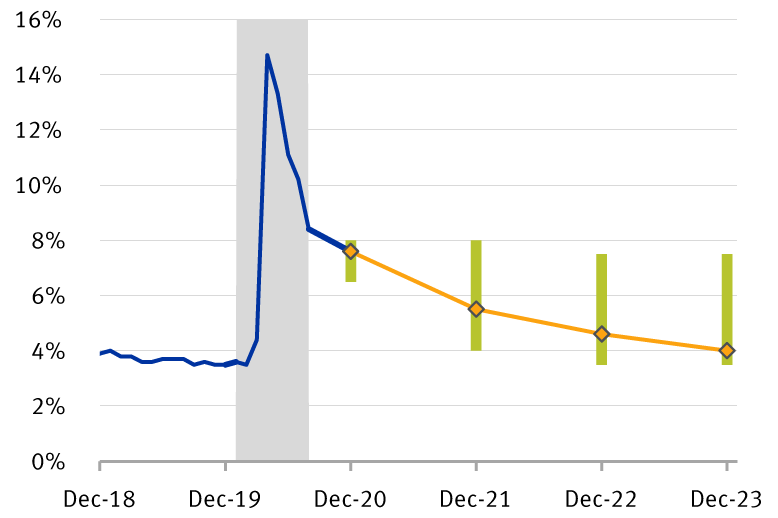 In fact, only four of 17 Federal Open Market Committee members have a 2023 rate hike penciled in. To be sure, a world with unemployment below four percent and core inflation above two percent only existed for a handful of months over the past decade. To say that there’s a high bar—some of the best economic conditions ever seen—for the next rate hike cycle to begin would be an understatement.

This, of course, is explained by the Fed’s new inflation strategy. In the past, those conditions would have marked the beginning of a rate hike cycle as the Fed has historically aimed to move preemptively ahead of higher inflationary environment driven by low unemployment. But as Fed Chair Jerome Powell noted in his press conference, record low unemployment in recent years hasn’t fueled higher inflation, so employment levels beyond estimates of “full employment” will no longer jumpstart the Fed into action.

Questions remain about the extent to which these more robust economic projections assume additional fiscal stimulus, particularly at a time when the chances of another fiscal package prior to the November election appear to be fading, though Powell again put the onus on Congress to deliver more in the way of fiscal support to aid the economic recovery.

For fixed income investors who will again have to manage through another extended stretch of zero interest-rate policy, the only light at the end of the tunnel appears to be the potential for rates to move higher. In this respect, the Fed’s latest forecasts still show that it believes the longer-run “neutral rate” that neither restricts nor boosts economic growth is around 2.5 percent. As the chart shows, while that estimate—which began in 2012—has moved lower in recent years, it has remained at 2.5 percent since 2019 even as the Fed has taken policy rates back to zero percent.

Despite rate cuts back to 0%, the Fed still sees rates returning to around 2.5%—someday 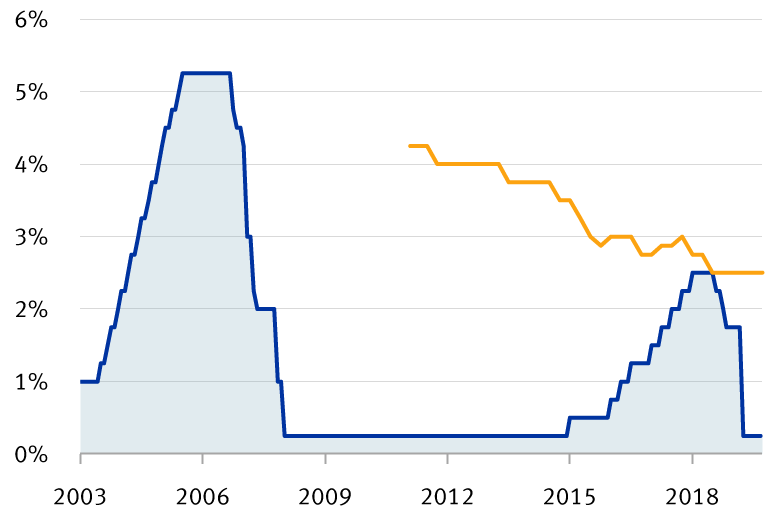 We harbor some reservations that that rate is slightly lower, around two percent. But the Fed’s goal of targeting higher inflation on average in an effort to re-anchor inflation expectations is aimed at raising the potential for higher “neutral rates” as that gives it more room to provide accommodation during period of economic stress. Regardless, it keeps potentially higher interest rates on the table for when the economy fully recovers.

Dusting off the lower for longer playbook, again

With the Fed on hold and only in accommodation mode for at least a few years, we continue to lean into risk within fixed income markets, maintaining a positive outlook on U.S. high-yield corporate bonds, preferred shares, and emerging market debt, where indexes for each sector currently yield 5.5 percent, 4.5 percent, and four percent, respectively. We shifted recently to a modestly negative outlook for U.S. investment-grade corporate bonds where index yields remain near record lows under two percent. We remain neutral on Treasuries as we see low ceilings for yields, and the sector will continue to provide defensive ballast for portfolios.