Early signals from the Q4 corporate reporting season are hinting that consensus earnings and sales forecasts for the quarter and even full-year 2021 could be too low.

This explains part of the reason why the U.S. equity market has held up so well, and the S&P 500 has reached new highs, despite the recent turmoil in the country and lingering COVID-19 challenges.

With 10 percent of S&P 500 companies having reported Q4 results thus far, both the proportion that has exceeded consensus forecasts and, more importantly, the magnitude of the beats have surpassed historical norms.

Collectively, these companies have posted earnings 22 percent higher than forecast, on average, well above the roughly seven to eight percent beat rate in a typical quarter. Companies in the Financials sector have led so far in terms of the magnitude of surprises with a beat rate of 28 percent. 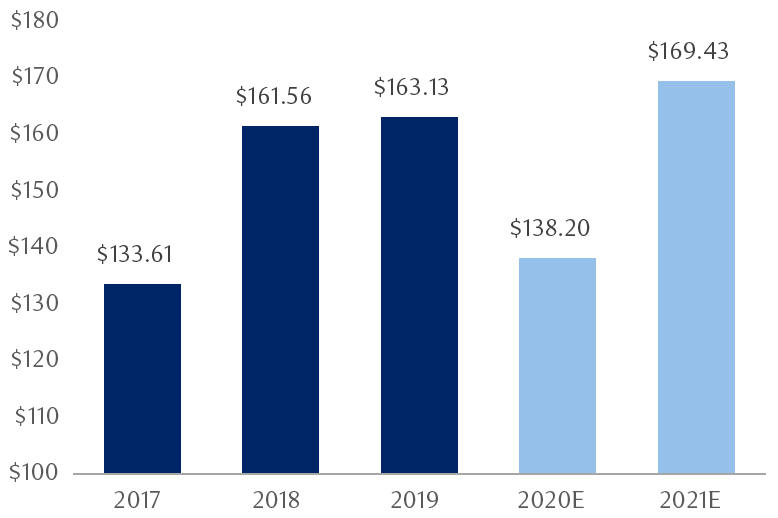 S&P 500 profit margins are also surprising handsomely, by 19.5 percent, and revenue is pacing almost three percent higher than the consensus forecast. While the latter figure may seem modest, it’s nothing to sneeze at, as revenue beats are normally one-third to one-half of that amount.

The COVID-19 bite in perspective

For those who live in communities where small businesses are struggling or have closed their doors, this good news might be difficult to grasp.

Many small businesses are facing tougher challenges from the lingering COVID-19 headwinds and restrictions than publicly traded corporations. Companies that are listed on the U.S. stock exchanges, especially those that are included in the major indexes, generally have greater access to capital, cheaper financing rates, and more flexibility in managing expenses during challenging periods than small private businesses.

The unprecedented COVID-19 shutdowns have enabled some large corporations to gain market share at the expense of some favorite local mom-and-pop businesses.

It’s all about the path back to normal

Publicly traded corporations, however, are not fully immune from the lingering COVID-19 challenges.

We think the magnitude of the full-year 2021 earnings recovery and market performance are dependent on just how fast COVID-19 is tamed by vaccines and other precautions, and the timing of the subsequent reopening of the U.S. economy. The path to getting from tight COVID-19 restrictions that exist in many states and large cities today to an opened-up economy could prove bumpy. From our vantage point, progress with domestic vaccinations has been disappointing thus far.

Nevertheless, the $169 per share S&P 500 consensus earnings forecast for 2021 is not a high hurdle, in our view, especially given the robust trends in the current reporting season. We don’t think the full-year estimate assumes a quick path back to normal, but rather, a more recognizable business landscape that starts to emerge in the second half of the year. 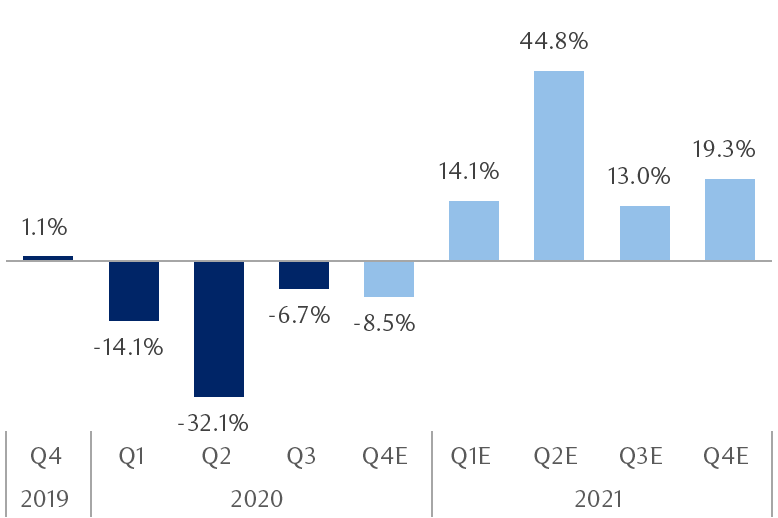 Once COVID-19 is tamed and shutdown restrictions are lifted—whether that happens sooner or later than expected—if anything, we think post-pandemic economic growth could end up being stronger than many economists are penciling in.

The savings rate among the population is unusually high at 14 percent, a level that RBC Capital Markets points out “has rarely been achieved in modern-day U.S. history.” This has been helped along by fiscal spending from Washington (aka helicopter money) that could grow further if the Biden administration gets even part of what it is requesting from Congress.

Very little has been spent by households on services such as entertainment and travel, and some are being frugal with goods purchases due to the economic challenges overall, so cash has been socked away.

Our national research correspondent believes that this factor, combined with pent-up demand for services, could ultimately lead to a spending splurge once the economy begins to return to normal.

RBC Capital Markets, LLC’s Chief U.S. Economist Tom Porcelli wrote in his 2021 outlook report, “While it is not part of our baseline forecast, we can easily see a scenario that is not particularly outlandish where the consumer finds themselves in a feel good spot later in the year (i.e. the vaccine is moving along without any major issues, we are getting toward full employment, etc.), and they begin to deploy this stockpile in earnest.”

For this reason, full-year 2021 earnings could actually surprise to the upside, even if there are COVID-19-related bumps in the months ahead. While some of this earnings optimism likely has been factored into the market already, we doubt all of it has.

During this reopening stage of the economic rebound, we think cyclical (economically sensitive) sectors have the potential to benefit the most from earnings trends, including those that are directly tied to discretionary consumer spending.

Multiple U.S. equity indexes have reached new all-time highs recently. While some technical indicators continue to flash warning signs that the market could cool off or even pull back over the near term, which would be normal, we remain constructive on the U.S. equity market based on a longer 12–18 month time horizon.

We expect corporate profits, revenues, and major equity indexes to gain more ground as fiscal stimulus is added and the Federal Reserve keeps monetary policies ultraloose, and especially as the COVID-19 headwinds are ultimately tamed.

This article was originally published in the Global Insight Weekly with the title "U.S. earnings dropping positive hints".