As a new strategic agenda begins to take shape in China, macro developments in Japan are relatively positive.

Asian economies and equity markets stand to benefit as the region’s powerhouses—China and Japan—loosen COVID-19 restrictions. But investors’ perceptions of China’s economic growth opportunities over the medium term and the priorities of the country’s new leadership team will likely also play a role in shaping the region’s equity and fixed income market performance. Heading into 2023, we favor Japan equities and Asia ex-China investment-grade bonds.

After the 20th National Congress of the Communist Party of China in October, investors have divergent views on the new leadership team and their policy agenda. Interestingly, offshore investors seem concerned about the consolidation of President Xi Jinping’s power and the capability of Li Qiang potentially serving as the next premier considering how he handled Shanghai’s COVID-19 lockdown. However, onshore investors point to Li Qiang’s effective work in China’s economic powerhouses of Zhejiang, Jiangsu, and Shanghai, as well as his long-standing support of the private sector.

We think equity market volatility could persist in the short term as investors debate the focus of future policy and look for signs to justify their own interpretation of Party Congress messages. Investors’ perceptions toward China’s economic growth and policy outlook will likely impact fund flows into the market and asset allocations.

Market participants are increasingly concerned about China’s medium-term GDP growth prospects. RBC Global Asset Management Inc. Chief Economist Eric Lascelles pointed out that he is increasingly leaning toward an assumption of sub-4% growth on a steady-state basis going forward. We believe this slower growth threatens the country’s ability to achieve its societal objectives and also means China may provide less of a tailwind to global growth than in the past. 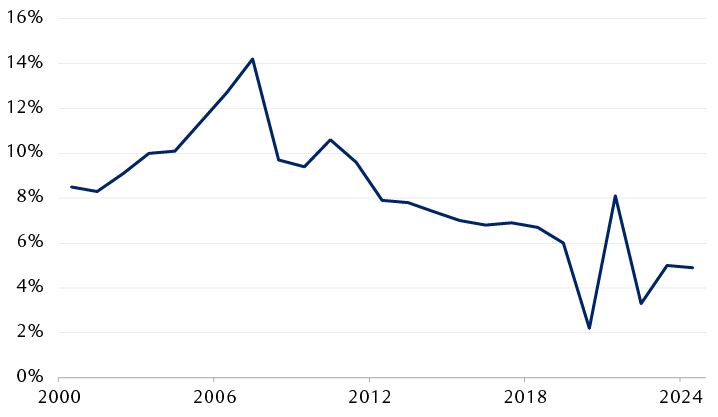 The line chart shows China's GDP year-over-year growth since 2000. The country experienced tremendous growth after entering World Trade Organization in 2001. After the Global Financial Crisis in 2008, growth gradually slowed down. Analysts expect growth to continue to slow as the country is facing challenges domestically and internationally.

We think the resumption of a sustainable uptrend in China equities in 2023 depends on whether the government will gradually loosen its COVID-19 restrictions and reopen the economy, and if leaders can demonstrate a pro-growth agenda. Even if the market remains choppy in the short term, we think investors can find opportunities in areas tied to the country’s long-term development blueprint—for example, industries that will benefit from safeguarding energy and food security, high-end manufacturing, and new green energy supply chains.

The state of macro developments in Japan remains relatively positive with the country moving toward endemic COVID-19, out of the pandemic phase. Japan’s household earnings and its labor market remain very resilient, non-manufacturers’ sentiment continues to improve, and the government is finally lifting its in-bound travel restrictions. We expect wage inflation to continue to rise, underpinned by reopening dynamics and likely further labor shortages. We anticipate domestic consumption will bounce strongly in coming quarters. The Bank of Japan (BoJ) forecasts Japan’s real GDP will expand at an above-average rate for the foreseeable future: by 2.0% in fiscal 2022, 1.9% in fiscal 2023, and 1.5% in fiscal 2024 (fiscal years end in March of the following year).

The BoJ maintains that current inflation is transitory and headline inflation will not be sustained above 2% in 2023. We expect the BoJ Yield Curve Control policy to be adjusted upward early in H1 2023, as broadening inflation and a tightening labor market will likely push up wages in the coming quarters. Based on the latest Bloomberg survey, analysts expect the yen to appreciate below the 140 level against the U.S. dollar by the end of 2023.

Support for the year-old government has been sliding, with opinion polls declining to levels even below the previous administration. While Prime Minister Fumio Kishida does not have to face another general election for more than two years, we think the low level of public support could make it difficult for him to control his party and push ahead with election pledges such as higher defense spending.

Heading into 2023, we maintain our positive stance on Japan equities. This is supported by a likely economic recovery, the reopening of Japan’s borders to overseas tourists, a relatively weak yen, our view that the increase in Japanese interest rates will lag other developed markets, and the end of deflation as corporations increasingly hike prices to reflect higher input costs. We view the latter as a positive structural factor for Japan equities as it would reflect a sea change in corporate pricing behavior.

Positive on Asia ex-China investment-grade credit, but cautious on China

Outflows to reverse. Asian local currency bonds suffered outflows in the first three quarters of 2022, reflecting investors’ underweight exposure to Asian fixed income after aggressive unwinding of positions throughout the year. China accounted for most of the outflows, followed by Malaysia, Indonesia, South Korea, and Thailand. We expect outflows to reverse to net buying, reflecting the retracement of global rates and global investors’ much lighter exposure to Asian bonds. However, we believe foreign investor demand is likely to remain weak over the medium term until global rates volatility and foreign exchange markets stabilize.

Concerns over China’s new strategic direction. The 20th National Congress of the Communist Party of China took center stage in October, with China’s leadership appearing to take a new direction by playing down the importance of reform and economic development for future legislation. This adds to investors’ concerns that the government is increasingly prioritizing security and ideology over growth. We believe such a domestic policy may further weaken foreign investor sentiment that is already reeling from China’s regional geopolitical issues, tough zero-COVID controls, and a housing crisis. Post the Party Congress, credit spreads of U.S. dollar-denominated Chinese investment-grade corporate bonds sharply widened to a much higher premium over U.S. investment-grade credit, reflecting investor worries. We expect these concerns to linger in the medium term, and investors to remain cautious.

China’s property market remains challenged. The Chinese property sector bore the brunt of the correction in China credit year to date. The selloff mainly impacted privately owned developers, with some contagion spreading to state-owned developers, and limited access to the capital markets for many developers. Chinese regulators have supported property developers’ new bond issues with credit protection or enhancements. However, a wider economic slowdown in China and the lack of strong property sales might offset these efforts, with cash flow still tight for many developers.

We favor Asia ex-China investment-grade bonds. Elsewhere in Asia outside of China, we continue to favor investment-grade bonds issued by what we see as quality Asian corporates with conservative balance sheets and government-linked companies that may benefit from implicit government support. This segment has been relatively resilient year to date, and we expect the strong credit profiles of the aforementioned issuers to see little deterioration despite headwinds of rising borrowing costs and inflationary pressures. 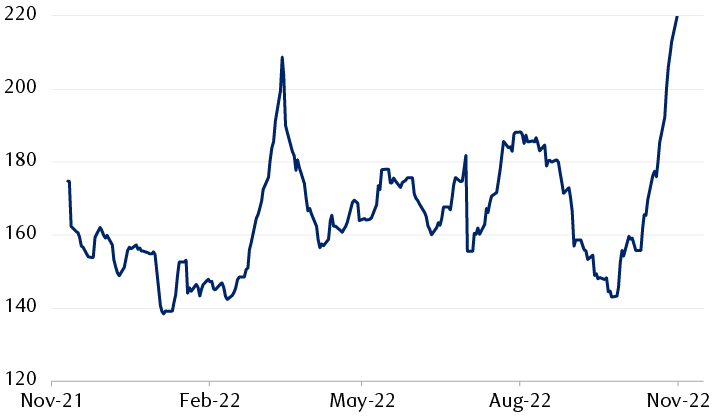 The line chart depicts credit spreads (shown as the Z-spread, or the difference from the zero-coupon U.S. Treasury yield curve in basis points) in the U.S. dollar-denominated Chinese investment-grade bond space over the past year. It shows credit spreads of U.S. dollar-denominated Chinese investment-grade corporate bonds reaching their highest level in the past year, along with a significant degree of volatility during the time period.

Note: Z-spread is the difference from the zero-coupon U.S. Treasury yield curve.

Asian hybrid/perpetual credit a key area. This space has attracted interest, not only because of the yield pick-up during the ultralow rate environment of recent years but also from investors’ belief that Asian issuers (particularly financial institutions) will exercise redemptions on the first call date. This belief was to a certain extent justified, in our view, due to Asian financial institutions having traditionally been sensitive to the reputational risks associated with not redeeming their perpetual bonds.

However, when a South Korean insurer announced on Nov. 1, 2022 that it would not redeem a perpetual bond on the first call date, a sharp selloff was triggered across Korean financials sector perpetuals as well as the wider Asian perpetual space due to increased concerns over non-call risk. That decision not to redeem was later reversed in a dramatic U-turn with the issuer citing market stability reasons, and the space retraced higher.

We believe this event may actually serve to reinforce the call likelihood of Asian financials sector perpetuals, especially those issued in jurisdictions where regulators take a more holistic, prudential regulatory approach.

We like the Asian financials sector perpetuals space, but would focus on bonds where yield pick-up and deal-specific features look attractive.

U.S. markets could change course more quickly, and in different ways, than investors might assume.

Investing for 2023: We are the hedgehog

One big thing—the arrival of a U.S. recession in 2023—should shape the investment landscape over the next 12–18 months. What does that mean for investors?

Geopolitical conflict and an energy crisis dominate an environment of unusually high uncertainty.

A turn towards austerity even as the UK economy enters a recession creates challenges for a new government.