Four reasons why stock markets around the world rebounded

We look at the catalysts behind stock markets’ resiliency, but point out that one of these makes us a bit uncomfortable.

The equity market rally has been sharp and swift since the Novel Coronavirus (2019-nCoV) became more acute, especially in the U.S. where the S&P 500 jumped 3.7 percent from its recent low and reached a new all-time high. Other markets have also bounced, although the recovery in Asia has lagged, understandably.

Asian markets have struggled more due to coronavirus 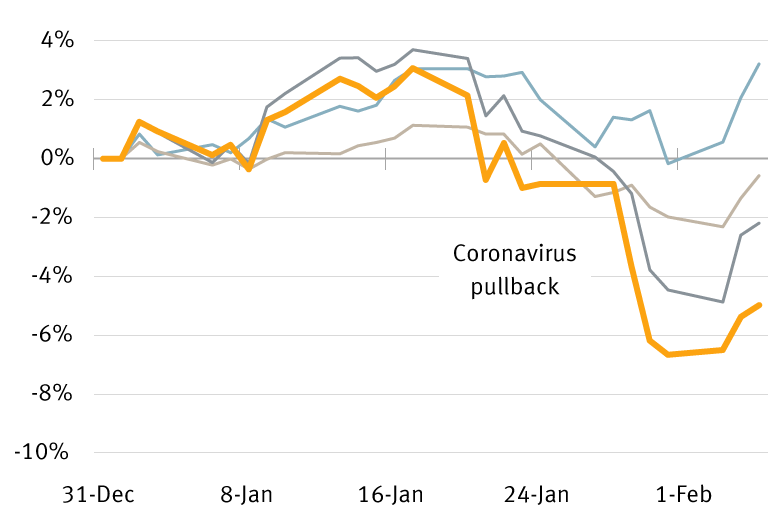 Why the optimism? There are four reasons markets have bounced, which we highlight below. However, the third reason gives us pause.

(1) Loosening the grip of coronavirus fears

Thus far, markets seem to be taking cues from official coronavirus data. Even though the number of infections has jumped by almost 250 percent since last week, recently the increase in the daily rate of new cases has moderated, according to data from the Chinese and U.S. governments, and global health organizations. New infections have been mostly contained to China, predominantly in Wuhan and the surrounding Hubei province. Reported death rates remain low, and there has been progress on developing treatments and vaccines.

(2) Economies likely to ride out the outbreak

We think it’s broadly accepted among institutional investors that coronavirus is likely to dent Chinese growth and constrain global growth. RBC Global Asset Management Inc. Chief Economist Eric Lascelles wrote, “The Wuhan epicenter is of considerable relevance to the Chinese economy, in its capacity as the country’s seventh largest city, given its status as a nationwide transportation hub, and given its large international manufacturing sector.”

However, we think equity markets are gravitating to our view that the economic impact should be manageable so long as the outbreak remains contained and because the Chinese government seems committed to supporting its economy. It just injected RMB 1.7 trillion into its banking system and officials have signaled a willingness to pull other levers.

At this stage, Lascelles expects China’s Q1 GDP growth to be cut in half to three percent from its typical six percent rate, but he anticipates “unusually rapid” growth in Q2 if the outbreak subsides as others have in the past.

The net-net effect is that Lascelles reduced his 2020 GDP growth forecast for China to 5.6 percent from 5.9 percent. He noted, “This has less to do with mortality rates and more to do with absenteeism, temporarily closed businesses, supply chain issues and confidence effects.”

While the U.S. and Europe could experience coronavirus-related headwinds—particularly in Europe, which is more closely tied to China trade flows—we think this would also be short-lived. Economic trends in the U.S. and Europe have improved lately. In the U.S., the closely watched ISM Manufacturing Purchasing Managers’ Index unexpectedly jumped back into expansion territory in January, rising to 50.9 from 47.2, and manufacturing sub-indicators were also strong.

The “fear of missing out,” or FOMO for short, is playing a bigger role in equity performance, in our view. This is the one catalyst that has propelled markets that we’re least comfortable with.

Data and anecdotal evidence suggest that some institutional investors are chasing momentum—specifically, narrow pockets of the U.S. market in the Technology and Communication Services sectors that have been outperforming in recent weeks and months. As more investors have piled in, this has likely amplified gains in these segments, and has resulted in a narrower group of stocks leading the U.S. market.

To us, a healthy rally is propelled over time by a broad group of stocks in a variety of sectors and industries leading, rather than just a narrow group.

RBC Capital Markets, LLC Technical Strategist Bob Dickey said there is reason to be circumspect. He wrote, “The higher volatility and big moves by some of the larger growth stocks in the market have often been signs of a market peak in the past, and the current market environment reminds us of those past periods where the volatile moves in some stocks did not make fundamental sense.”

He believes the U.S. market could pull back in the near term. He wrote, “We do not see the recent bounce as the start of a new up-leg for the indexes but as a more typical pattern of higher volatility that often comes at turning points. We would expect this higher volatility will continue for several more weeks and lead into a pullback to the support levels of around 27,000 on the Dow Jones Industrial Average (DJIA) and 3,000 on the S&P 500 over the next two months.”

Equity markets have also bounced lately because Q4 earnings and revenue trends have been largely as expected, with some bright spots. The U.S. earnings growth rate is likely to end the reporting season in positive territory.

U.S. valuation is more elevated above its long-term average than other major indexes 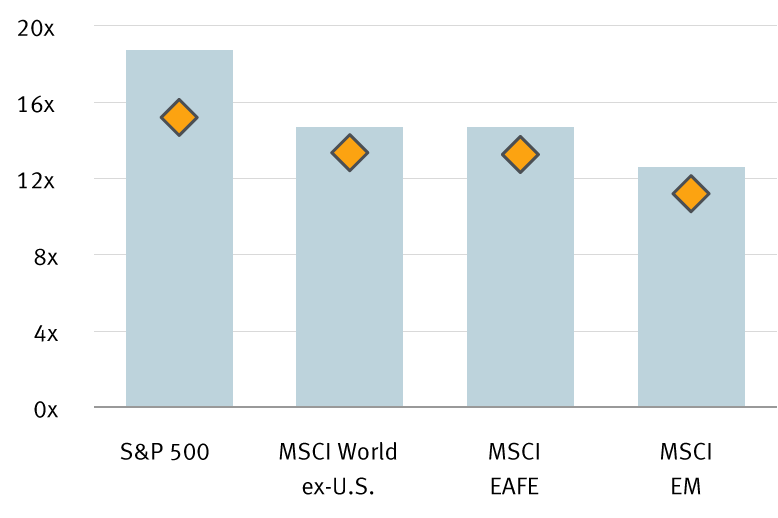 Also, the rate of decline in forward earnings estimates has slowed or stabilized in a number of developed markets. For example, the consensus forecast for S&P 500 earnings has dipped just $1 to $176 per share since late December.

While equity markets have bounced due to these four factors, we don’t rule out additional volatility as the economic implications of coronavirus are further discerned and digested. Any swings in U.S. momentum stocks could also impact the broader U.S. and global equity markets.

For long-term investors, we are still comfortable holding total equity exposure at the benchmark level in portfolios as long as most of our U.S. recession indicators continue to signal that the expansion will persist and the global economy is not meaningfully threatened by coronavirus or other extraneous factors. We do, however, recommend that investors double-check their equity allocations. If they have run ahead of target levels, now would be a good time to trim them back to normal, in our view.