For the past two months the U.S. equity market has been battered by persistent inflation, the Fed’s aggressive rate hikes (and plans for more), the further spike in Treasury yields, and heightened expectations of recession and cuts in corporate earnings estimates. Instability in the UK has also weighed on the market lately.

It’s no wonder the S&P 500 traded down to a new low of this bear market cycle, retreating 25 percent year to date on October 12.

The S&P 500 continues to struggle

Under pressure due to persistent inflation as well as concerns about Fed rate hikes, the economy, and earnings growth 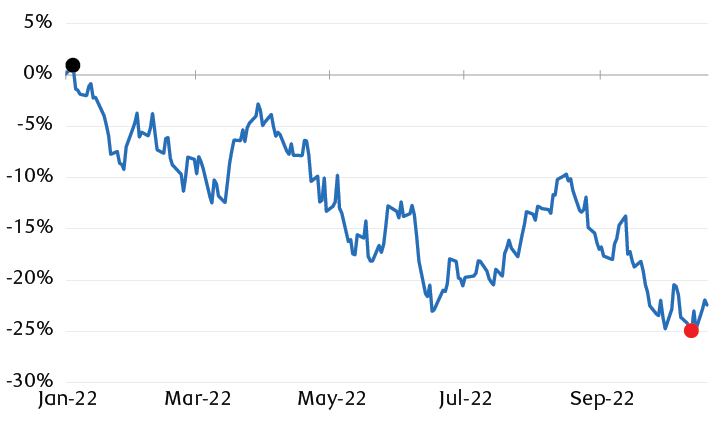 Line chart showing the daily percentage change in the S&P 500 Index from December 31, 2021 through October 19, 2022. The Index’s all-time high on January 3 was followed by a decline through mid-March with the S&P 500 falling 12.4% year to date. The market subsequently rebounded, recouping much of its lost ground. However, from April through mid-June the market sold off sharply, reaching a low point on June 16, down 23.1% year to date. After that it bounced, regaining roughly half of that lost ground. But then in mid-August it renewed its downtrend as inflation, Fed rate hike, and economic pressures reasserted themselves. The S&P 500 reached a new low for the year on October 12, down 25%. Since then the market has bounced slightly.

Market participants continue to keep an eye on all of these issues, but are now most focused on the profit outlook for S&P 500 companies given the Q3 corporate reporting season is upon us.

While we think a lot of earnings negativity has already been priced into the market, uncertainty about 2023 profits could generate more volatility in coming months because there is a wide range of potential outcomes.

So far, so (somewhat) good

Q3 earnings reports have been good thus far, especially among big banks and investment firms. There have also been bright spots in the Consumer Staples sector and defense industry.

But it’s very early days. We anticipate there will be a number of hiccups and misses in a variety of sectors given the high-profile earnings warnings that occurred before the reporting season began. This would be normal considering the economic headwinds.

The magnitude of Q3 earnings beats are lagging the historical averages—also no surprise due to the challenges facing the economy. With almost 20 percent of the S&P 500’s market capitalization having reported, earnings are exceeding the consensus forecast by 2.5 percent, lower than the pre-COVID average of 5.2 percent. Revenues are beating by 1.1 percent, a bit higher than the pre-pandemic norm.

The Q3 consensus forecast is for S&P 500 earnings growth of 3.1 percent year over year, according to Refinitiv I/B/E/S. When all is said and done, that figure could rise a percentage point or two even if the magnitude of earnings beats remains muted for the companies that have yet to report.

The S&P 500 full-year 2022 consensus forecast now seems more realistic to us. It has retreated to $222 per share from $229 per share in early July. While RBC Capital Markets’ estimate of $216 is lower, we think earnings for the full year will end up within this zone.

Our bigger concern is that the 2023 consensus forecast still seems far too lofty despite the fact that it has drifted down to $239 per share from $251 per share in early July.

We think this forecast is unachievable given the mounting economic headwinds created by ongoing inflation, Fed rate hikes, and higher borrowing costs (the 30-year fixed rate mortgage has spiked to 7.2 percent, for example). In our view, these factors are bound to pressure S&P 500 earnings. And if a full-blown recession occurs—which is looking more and more likely according to our economic indicators—the pressure on earnings could be meaningful.

RBC Capital Markets forecasts S&P 500 earnings of $208 per share in 2023, much lower than the $239 consensus estimate. This translates into zero earnings growth from 2021 through 2023, as the chart illustrates. 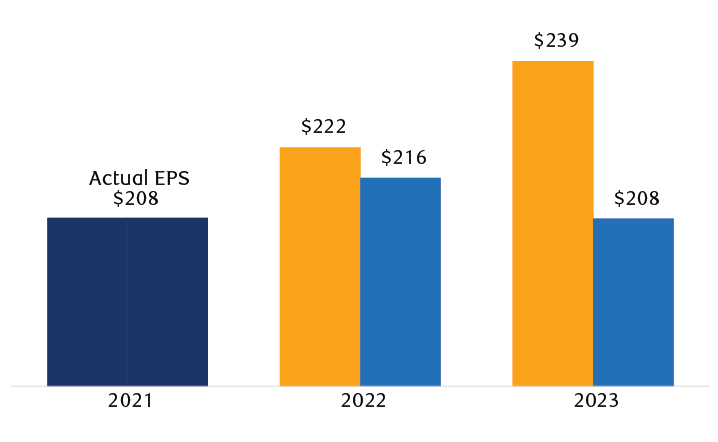 RBC’s earnings estimates incorporate weak and sluggish economic activity in Q4 of this year and Q1 of next year, but do not assume a full-blown recession. If a recession does indeed unfold, there would be downside risk to RBC’s 2023 earnings estimate.

Surrounding the previous 11 recession periods since the 1950s, S&P 500 earnings fell 23.6 percent, on average, from peak month to trough month, according to RBC Global Asset Management. Interestingly, during the four periods that were associated with inflation shocks, there was a lesser 17.7 percent average earnings decline.

And now, the good news

The good news is we don’t think most institutional investors (managers of mutual funds, hedge funds, and pension funds) expect the S&P 500 to deliver $239 per share in earnings next year. In fact, we consider that forecast by the collective group of Wall Street industry analysts to be stale—very stale.

This is because very few management teams have provided full-year 2023 earnings guidance, and therefore the many industry analysts that collectively represent the consensus forecast have not gone out on a limb with their earnings estimates for next year. A meaningful proportion of management teams will likely provide guidance during the Q4 reporting season in January and February of 2023.

We think large institutional investors understand this, and therefore the market is probably factoring in 2023 earnings somewhere between the lofty consensus forecast and RBC Capital Markets’ forecast.

And that’s not all

The even better news is that if history is a guide, investors probably don’t have to wait for the 2023 consensus earnings estimate to completely adjust to its trough level for the market to begin a sustainable recovery. RBC Capital Markets, LLC’s Head of U.S. Equity Strategy Lori Calvasina points out that the S&P 500 tends to bottom three to six months before the end of a downward earnings revision cycle.

Calvasina wrote, “The question in our minds isn’t whether 2023 estimates get cut enough over the next month or so. It’s whether they are cut enough so that the final clean-up can happen in the next reporting season when companies traditionally do a deeper dive into their year-ahead outlooks, which tends to prompt bigger adjustments from the sell-side analyst community.”

In the meantime, volatility—both to the upside and downside—will likely persist. We continue to recommend Market Weight exposure to U.S. equities. While earnings and economic vulnerabilities remain, a lot of bad news has already been priced into the market.