As many central banks act forcefully to curb today’s challenges, we look at prospects for major economies and what to expect as this period evolves.

The combination of the Russia-Ukraine conflict and China’s zero-tolerance COVID-19 policy has extended the post-pandemic supply chain shock and contributed to push inflation to the highest level since the 1980s. Central banks have responded aggressively in many countries, but not all. We explore the economic scenarios for key regions and investment implications of central bank policy divergence.

U.S.: Taking the heat out

The U.S. appears most insulated from the energy and food security crises that have been exacerbated by the Russia-Ukraine war. Inflation and a cost-of-living squeeze are constraining consumer spending, though much less so than in other regions thanks to robust income and employment growth, combined with strong household and business balance sheets.

U.S. financial conditions have tightened over the past four months at a rate seen only twice in the past 30 years. Yet they remain close to their long-term average and seem not restrictive yet, according to Mark Dowding, CEO of BlueBay Asset Management, an RBC group company. The Fed welcomes the moderation of economic activity, and hopes that some of the heat can be taken out of the labour market, alleviating recent upward pressure on wages and the risk of a second-round inflationary impact. 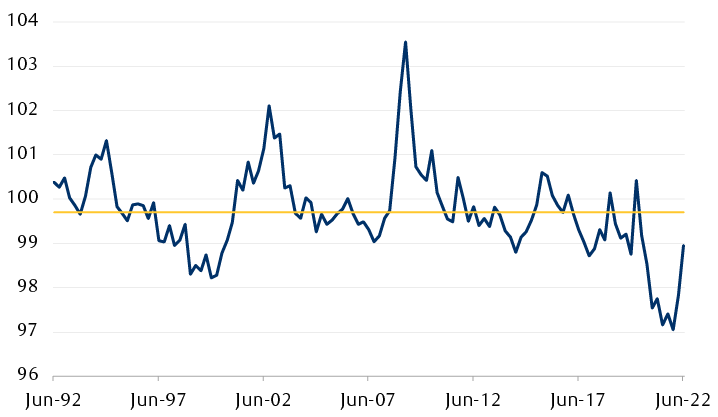 The graph shows the Goldman Sachs global financial conditions index, which measures how easy it is to secure credit, from June 1992 through June 2022. A high level means financial conditions are tight, with credit difficult to secure, while the reverse holds true. On average, over the past 30 years, this index was just below 100. It dipped to a low of 97 during the pandemic as central banks added liquidity to the financial system. From that low, the index climbed sharply in a short time to 99, though it still remains below the long-term average with the current reading of 98.9.

As long as inflation is elevated, the Fed will likely seek to engineer a slowdown in the labour market by continuing to tighten financial conditions—via interest rate hikes and culling assets from its close to $9 trillion balance sheet, a process known as quantitative tightening—until rates are near 2.5 percent. We expect inflation to fall steadily going forward, though the path from eight percent to five percent could be shorter than that from five percent to two percent. Economic activity is slowing down, but from a high level.

The Fed’s monetary policy tightening has underpinned U.S. dollar strength, which can be problematic for many countries from emerging markets to the UK. A strong greenback means the price of imported goods quoted in U.S. dollars, such as energy, increases for such markets.

While most of the Western world is grappling with uncomfortably high inflation, China’s inflation pressures are modest due to weak demand. The country’s zero-COVID strategy has been a substantial drag on the Chinese economy. The People’s Bank of China has eased monetary policy, but whether these supporting measures are effective remains to be seen. Residents may continue to behave cautiously out of concern for potential COVID-19 containment measures.

Infection cases are now receding and lockdowns are being eased. More stimulus may be in the offing—comments from Chinese President Xi Jinping at the April Politburo meeting and those of Premier Li Keqiang at the June State Council meeting suggest the government is eyeing strong policy support to offset headwinds.

Four policy areas that were tightened in 2021 could further turn towards easing: (1) Fiscal policy, with infrastructure and pandemic fiscal stimulus picking up; (2) monetary policy, with another 75 basis point (bps) cut in the reserve requirement ratio for banks and 20 bps of policy rate cuts widely expected for the rest of this year; (3) housing market regulations; and (4) big tech, as China has shown signs of softening its crackdown. Should fiscal and monetary policy gain better traction, growth should eventually accelerate, in our view.

A material and sustained easing of lockdowns should also improve supply chains and could reduce inflationary pressures.

Europe: Too close for comfort

Europe faces a difficult environment on several fronts. Given its reliance on Russian energy, it is most vulnerable to geopolitical risk. Headline inflation reached a high of 8.1 percent year-over-year in May, though this was mostly driven by food and energy, unlike in the U.S. where inflation is broad-based. After excluding those two components, inflation on the Continent is a more manageable 3.8 percent.

Even so, we expect inflation to remain elevated and, as a result, for the European Central Bank (ECB) to end its bond purchase programme in June, and from there to lift rates out of negative territory to zero percent. Though this may not sound like much, it is the first tightening in more than 10 years. Once rates are at zero, the ECB is likely to pause and take stock of the situation, in our view.

Following the initial steps of rate normalization, we see growth softening over the course of this year. However, fiscal support from the EU’s recovery fund should aid in offsetting the slowdown.

The UK faces an acute cost-of-living crisis and arguably the most challenging growth and inflation dynamics of any developed market. We expect private consumption to be restrained. Moreover, we see a persistent drag on growth from ongoing weakness in exports, exacerbated by continued adjustments to post-Brexit trading rules.

The Bank of England (BoE), the first major central bank to embark on a tightening cycle, will likely continue to raise rates. A recently announced support package for households worth 0.6 percent of GDP has led market participants to expect the Bank Rate to reach 2.3 percent at year-end, implying a 25 bps hike at every policy meeting this year. The BoE walking a tightrope between growth and inflation is one of the reasons why sterling has struggled against the dollar year to date.

Japan faces similar currency weakness, and this may partly offset the drag from the slowdown of its main export markets. A weaker yen is driving some inflation, though to a subdued level compared to Western economies, at 2.5 percent currently. As such, the Bank of Japan remains on hold as the central bank still sees its top priority as supporting the economy.

On May 31, Prime Minister Fumio Kishida unveiled a plan—“the new capitalism”—to modernize the economy and boost growth, including tax incentives and greater support for decarbonization, digitization, and innovation. Given that Kishida enjoys an approval rating of 66 percent, many of these measures are likely to be implemented, potentially stimulating the economy. An improved growth outlook and subdued inflation are the main reasons we are constructive on this market.

Equities have largely priced in this more challenging backdrop in a short space of time. Valuations are now below the long-term average in the U.S. and are at very low levels in Europe, China, the UK, and Japan.

In the short term, though investors may still be unsettled about grappling with concerns over inflation and Western central bank hawkishness, if global and U.S. recessions are avoided, as our economic indicators are currently suggesting, we think the magnitude of equity market downside will be limited. We expect this period of market volatility to eventually resolve to the upside, as inflation wanes and the global economy stabilizes.

With contributions from Jasmine Duan.