The U.S. economy’s Q2 COVID-19 crash was about as bad as economists had expected—but that doesn’t make it feel any better. GDP plunged 32.9 percent (q/q annualized) based on preliminary data, by far the worst decline since the Bureau of Economic Analysis (BEA) began collecting comparable quarterly data in mid-1947. The previous low was -10 percent in early 1958.

This plunge, combined with the five percent retrenchment in Q1 of this year, wiped out three years of economic growth. The size of the economy is back to what it was in Q2 2017.

Now that we know what we already thought we knew about Q2, the bigger questions are: How long will it take to climb out of the pit, and how does the U.S. stack up against other major economies?

U.S. stocks have climbed a wall of worry 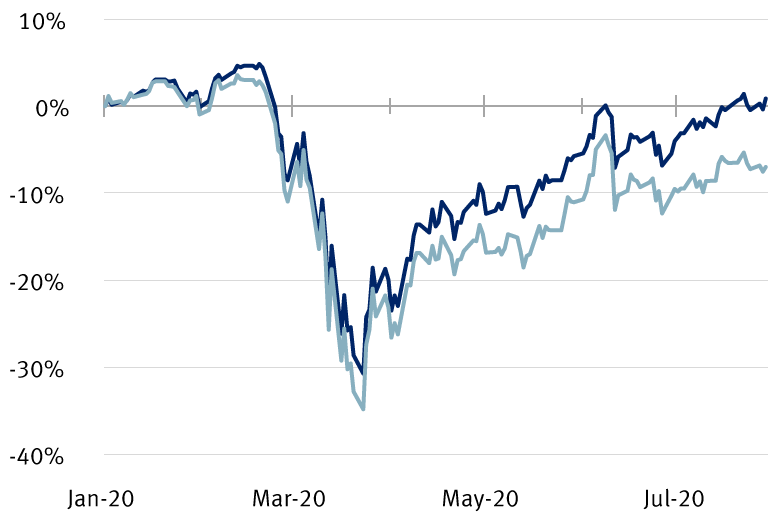 The real-time indicators RBC GAM tracks show renewed COVID-19 shutdowns have caused U.S. economic activity to retreat slightly in July. There is uncertainty about the remaining months of Q3 given the trajectory of infections and the possibility state and local leaders could extend restrictions or tighten them further. The ongoing outbreak has also inspired additional caution among the public.

At this stage, RBC GAM Chief Economist Eric Lascelles forecasts U.S. GDP will decline 8.0 percent y/y in 2020, down from his previous forecast of -7.1 percent. This would be the biggest hit to annual GDP since the 11.6 percent slide in 1946.

No surprise, U.S. growth will take a hit 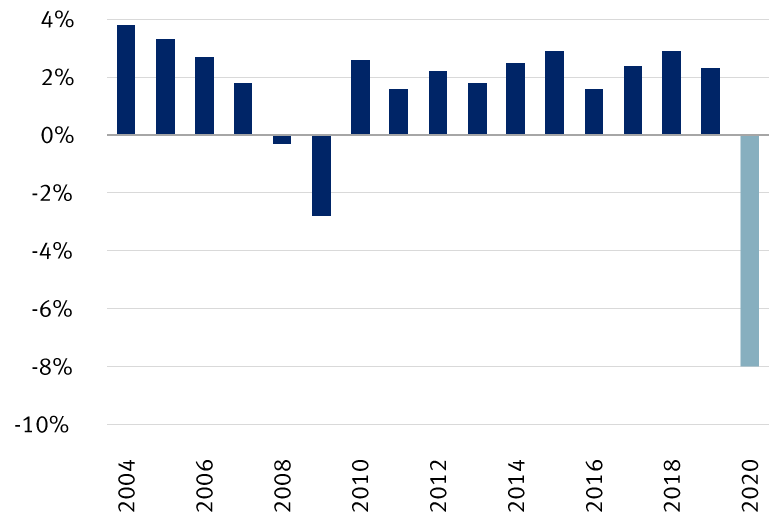 Lascelles recently wrote, “We assume the economy begins to stabilize in August and then starts to edge forward thereafter, but remains behind schedule relative to most other countries. Instead of half of the economic decline being recovered in July, it takes until November to reach that point.”

It will take much longer to claw back the rest of the lost ground. By mid-2022, U.S. GDP should be back up to where it was before the COVID-19 crisis began, according to RBC GAM. Previously, it had anticipated this would occur by December 2021.

The return to “normal” activity—the point at which all remaining economic slack is wrung out of the system—wouldn’t occur until the start of 2024, according to Lascelles. He had previously targeted mid-2022.

Lascelles added, “This is still notably faster than after the global financial crisis, but hardly ‘fast.’ In all of this, we assume the U.S. avoids any severe fiscal cliffs …”

Outside the U.S., the outlook is better in some places and worse in others.

China is the standout to the upside. Despite a brief and strict COVID-19 lockdown early in the year and a related 6.8 percent y/y economic contraction in Q1, official statistics indicate the economy grew 3.2 percent y/y in Q2.

Lascelles wrote of China, “Keep in mind the country grappled with COVID-19 earlier than everyone else, such that Q2 was a recovery quarter, in contrast to elsewhere when it was the trough quarter. Still, the fact that the Chinese economy is larger than a year ago is remarkable. Granted, the economy would normally be perhaps six percent larger than the year before, so something has been lost. But not a great deal.”

But he doubts China’s quick bounce-back will be replicated elsewhere, noting that, “It is probably not reasonable to expect other countries to manage so complete a recovery over the same timeframe—quarantines elsewhere have been less thorough and developed world economies are more reliant on such sectors as tourism and entertainment that will not be able to fully recover in the near term.”

Back in North America, Canada’s economic prospects now look somewhat “less bad” than those of the U.S. The forecast from RBC GAM calls for GDP to decline 6.8 percent y/y in 2020, which is a full two percentage point improvement from its previous estimate, and better than the -8.0 percent forecast for the U.S. 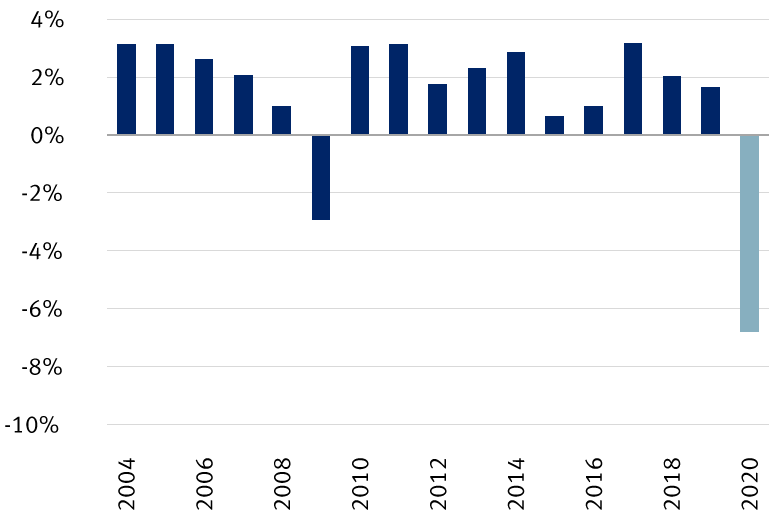 The European Union’s recovery path has also improved. Preliminary data show that services and manufacturing activity climbed into expansion territory in July, with the former well exceeding economists’ consensus forecast. We think the recently agreed to landmark fiscal package will also assist the recovery. RBC GAM upgraded its forecast for EU GDP to a decline of 6.6 percent y/y in 2020. The UK’s outlook, however, remains particularly challenging; RBC GAM forecasts a GDP decline of 8.7 percent.

We think the lingering economic uncertainties support a modest Underweight position in U.S. and global (total) equities in portfolios. We continue to recommend a Market Weight position in Europe due to relatively better valuations and the recent clearing of fiscal hurdles, and we would Overweight Asia ex Japan, in part due to China’s better economic prospects.

In the wake of the pandemic, RBC Wealth Management names first-of-its-kind head of Culture and Field Experience to keep employees at the center.

Five ways to stay healthy through the holidays

A healthy holiday season doesn't have to be a contradiction. Check out these tips for making wellness a priority through some of the most demanding months of the year.

Did you know this about money management? Caregiving causes a financial impact on families—especially women.