Industrial commodity prices sagged at the onset of the global COVID-19 pandemic, but then reversed course after a couple of months and embarked on a sustained march higher that continued until recently. Copper, a bellwether industrial metal, climbed from $2.08 per pound in March 2020 to a peak of $4.88 in May of this year before settling back by as much as 20 percent in recent weeks.

As this price surge gained momentum across the spectrum of industrial metals, talk of a commodity supercycle—a multiyear, perhaps even decade-long, advance in prices—grew louder. Recently, however, some bricks in the wall of the supercycle story have become unstuck:

These developments prompt an important question for many investors:

Is the recent moderation in some industrial commodity prices merely a pause in a sustained uptrend that has much further to run, or are most of the upside fireworks already behind us?

What do you think is driving all this theorizing about a commodity supercycle? It has to be more than just commodity prices moving up a lot over the past year.

Chris Beer: I think if you could point to one thing, it would be the fact that policymakers around the world appear to have swung decisively behind encouraging—or requiring—the development of decarbonized, sustainable power. Europe and China have become leaders in this regard and are mandating strict policies to meet net-zero targets by 2050, while the U.S. is more focused on allowing the market to incentivize the green economy. Corporate boards, too, have committed to targets that would dramatically reduce their companies’ carbon footprints over the next three decades. All this will require the electrification of a much greater proportion of the economy.

We think the supercycle expectations are built in large part on the premise that these new inputs will be over and above the increases in consumption of these metals that come with normal economic growth.

However, we see the possibility of some double counting here. For example, renewable power—solar and wind—already accounts for most of the new generating capacity in the developed world, but this change comes at the expense of conventional power stations not built. Similarly, electric vehicles are replacing gasoline-powered automobiles, but not materially adding to the total number of vehicles sold, and EVs arguably require fewer conventional material inputs while promising to have net negative knock-on effects on parts and service.

So just using more of these inputs doesn’t necessarily mean that overall economic growth will be running faster than it otherwise would be. That’s the unstated, hoped-for implication, but it’s unlikely, in our opinion. That said, we see the greening of the economy as potentially the first strong secular tailwind for the metals that have crucial roles in the clean energy transition, beyond the inevitable cyclical demand for those metals over future business cycles.

Keeping with EVs for the moment, another factor to be considered is when these new volumes of, let’s say, copper required by increasing electrification will become meaningful to the overall supply/demand equation. Roughly speaking, there are 100 kg of copper in an EV versus about 30 kg in an ICE automobile. In 2019, the year before the onset of the pandemic, approximately 2.1 million electric vehicles were produced; that was about two percent of total car production and added about 150,000 metric tons net to global copper demand, which totaled 23 million metric tons that year. In other words, EVs accounted for less than one percent of copper demand.

If the number of EV units produced were to grow by 20 percent per annum from 2019 to 2030—a tall order, but not out of the question—then the extra copper consumed each year would rise to about 1.4 million metric tons, or about four percent of total copper demand. That’s enough to be noticed, but not enough to move the needle by itself.

But beyond 2030, even if the growth of EV sales were to slow by half to 10 percent per annum, but with the growth now applied to this much larger base, then the EV segment alone would rapidly become one of the most important drivers of total copper demand growth. So in our view, the eventual replacement of ICE vehicles by electric ones is clearly a net positive for copper consumption, although most of the impact on the copper market should arrive after 2030.

Industrial metals on the rise 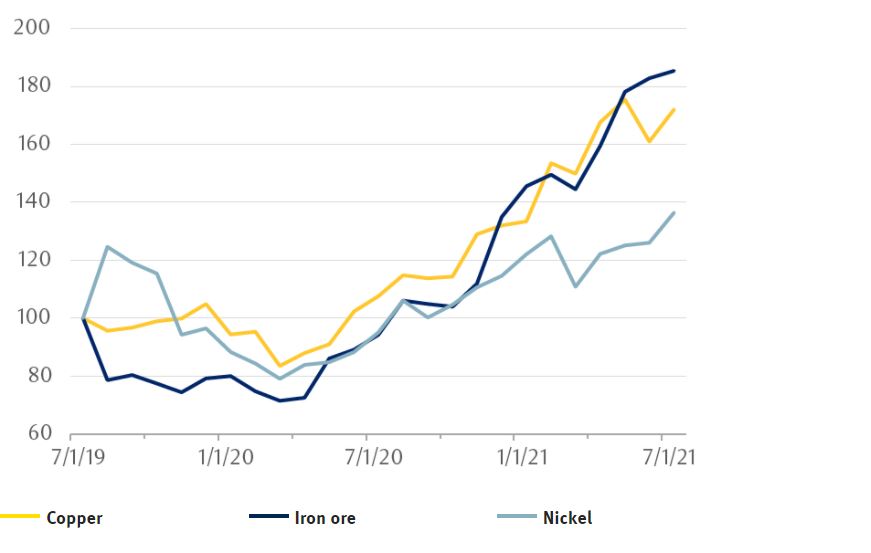 But as you mentioned, EV production is just one of many factors that are being added to the industrial commodity equation by the greening of the global economy.

Yes, there are many factors to consider, but in most cases the projected impact on metals consumption is unlikely to be significant for a decade or more. For example, there are a number of promising new technologies in terms of emissions reduction, such as carbon capture or replacing the use of coking coal in the steelmaking process with hydrogen produced using electricity from renewable sources. There’s a lot of enthusiasm around these ideas, but so far they are only being tested on a limited scale.

Or consider offshore wind farms: turbines use a lot of copper and steel. Quite a number of large new wind power projects have been announced over the past year, but history shows that only a fraction of projects that are announced get built, and for those that do, there is often a considerable time interval before construction begins or power is produced. It’s not just that the permitting process is usually time-consuming and politically fraught; most projects don’t proceed to construction until there is a long-term sales contract in place at a price that makes economic sense, and those are getting harder to come by.

How does China figure in the outlook for copper and other industrial metals?

Well, the short answer is, “a lot.” China consumes more than half the annual global output of most metals. For two decades, it has accounted for the greater part of the growth in base metal consumption. But over most of that time span, China’s policymakers were focused on modernization and urbanization. More than 60 percent of the population lived in rural, mostly agricultural communities in 1990; today, it’s less than 20 percent. During the period of rapid urbanization, the government promoted the building of infrastructure, urban housing and heavy, capital-intensive industry. More recent policies have sought to realign the economy away from a dependence on debt-financed fixed asset investment and toward the consumer and services sectors.

Most forecasters expect China’s economy to slow further over the coming decade, and to become less capital-intensive in the process. That would suggest China’s consumption of industrial materials will not grow as fast as it has. So we expect that China will remain hugely important, but not as powerful a source of dynamic growth.

With China no longer to be relied upon to stoke demand for industrial commodities to the same degree, and with the greening of the global economy not likely to have a significant impact on commodity consumption until late in this decade, where does that leave the supply/demand balance for copper?

Inventories are presently on the low side, which would normally be supportive, but weaker demand from China has taken the steam out of prices for now. Also, over the coming year, three major mining projects are set to ramp up production and bring new supplies to the market, which may have a mildly depressive effect. That said, we believe the U.S. and Europe are no more than midway through the current economic expansion, profit growth is strong and some sort of infrastructure package will likely be agreed to in the U.S.

That leaves the demand picture mixed, but far from weak. And while there will be new supplies arriving over the coming year, bear in mind that the world needs more refined copper every year to keep up with even moderate demand growth. Historically, it's taken higher prices to stimulate new production; in our view, this argues against any material price weakness from here, and for higher prices down the road as the new demand from the greening of the global economy becomes more important later in the decade and beyond.

And how do things look for iron ore, the other big base metal market?

The global iron ore export market is a very large 600 billion metric tons and China is the major customer. As we noted earlier, China’s economic priorities are being realigned toward services and the consumer, with less emphasis on infrastructure and fixed asset investment. That means China’s use of steel may be plateauing. But at the same time, steel demand is likely to rise in India and some other emerging economies. In the near term, we think demand should remain reasonably strong in many developed economies as well, because the global supply chain disruptions of the past couple of years have provoked some precautionary onshoring of manufacturing production facilities.

But importantly, supply growth for iron ore is constrained. One large new project just getting underway in Africa will eventually bring 20 to 50 million metric tons of iron ore to the market annually, but not for several years, and at a cost of at least $20 billion. Here, too, high prices—probably higher than today’s—will likely be needed to stimulate the required investment to meet even modest demand growth.

So, we're left with some uncertainty as China’s demand for industrial commodities plateaus, or at least doesn’t grow as fast as it has in prior decades. Does that still leave room for a supercycle interpretation?

If we're talking about a multiyear period of prices moving higher on a trend basis, we think it does. If we're thinking of an uninterrupted continuation of last year’s rocket ride higher, then probably not. The long-term demand picture looks better the further out you get and the supply picture is tight coming off a lengthy period of underinvestment. Again, our view is that higher prices will be needed if supplies of the major metals are to keep pace with even modest demand growth.

Chris Beer leads RBC Global Asset Management's coverage of the Energy and Materials sectors. He has more than 25 years of experience researching and analyzing natural-resources companies, with a focus on precious metals and base-metal mining companies. His combination of investment-industry experience and four years as a field geologist bring diverse perspectives to his analysis.