Profit growth will be dialed back this year. Should investors remain dialed in to equities?

Amid the noise from the stock market correction and subsequent rebound, a notable shift in the operating environment has taken place affecting many U.S.-based companies. Corporate earnings, revenue, and profit margin trends have moderated in Q4 2018, and we expect the momentum will dial back further in 2019. Given the old Wall Street adage, “Earnings are the mother’s milk of stocks,” this is worth investors’ attention. Over the long term, earnings drive equity prices.

While much of the deceleration in the revenue and earnings outlooks was likely factored into stock prices late last year during the sharp U.S. and global equity selloff, earnings-related headlines could become amplified this year and surprises could lead to additional volatility. Economic softness at home and abroad, tariff uncertainties, the more complex political backdrop in Washington, and the rapidly waning effect of the corporate tax cut are leaving management teams less certain about growth prospects. We think a constructive yet vigilant stance is appropriate. Therefore, despite reasonable valuations we remain Market Weight U.S. equities, rather than make aggressive new commitments.

The forecast for 2019 S&P 500 earnings growth has declined from 10 percent y/y last October, to 5.2 percent currently, according to the consensus of Wall Street analysts. The new, lower estimate equates to $170 per share, which we think is appropriate and achievable. 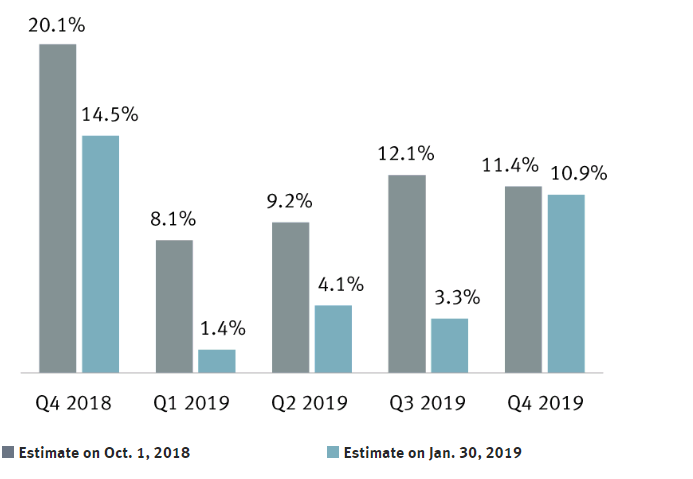 Thus far, there are few signs an “earnings recession” (outright earnings decline) could unfold this year. If the Fed refrains from raising interest rates too far, too fast, as it has signaled recently, and if some tariff risks recede, the $170 estimate could end up being too low. But 5.2 percent estimated growth doesn’t leave much room for missteps or negative tariff or economic developments.

Consensus revenue and profit margin expectations have moderated as well, but to a lesser extent. The 2019 S&P 500 revenue growth forecast retreated from 5.4 percent in October to 4.7 percent currently, and margin growth from 17.2 percent to 16.8 percent. Both of these lowered estimates are reasonable, in our view.

The Q4 2018 earnings season is underway and the developments provide hints about how this year could unfold. Overall results and management guidance have been better than expected, especially in light of the negative sentiment that prevailed just before the reporting season began.

On conference calls, executives’ comments have been positive on balance, but appropriately restrained given the multiple macro uncertainties. Management teams normally don’t have much incentive to go out on a limb with their forecasts, and they have even less now.

More companies have described demand for products and services as healthy rather than mixed or weak—a good sign for overall economic growth. The proportion of cautious remarks represents 34 percent of firms among those that have commented on demand trends thus far, according to RBC Capital Markets. A number of executives have pointed to softer European momentum. Tariff challenges have been mentioned by a small group, but still don’t seem like much of a factor, at least at this stage.

Q4 earnings and revenue beat rates are tracking modestly below the preceding quarter, but the magnitude of the beats—the percentage upside to estimates—is lagging. For example, earnings are exceeding the consensus forecast by two percent, much lower than the 4.9 percent average during the past three years. Nevertheless, the Q4 trend has improved as more companies have reported results, and that figure could rise as the earnings season progresses.

RBC Capital Markets notes wage/benefit pressures are being most frequently cited as headwinds for profit margins. This is interesting given wage growth is not showing up as being problematic in broader economic data. Other expense categories have generally been neutral-to-favorable, so any wage/benefit pressures at the company level are largely being absorbed. 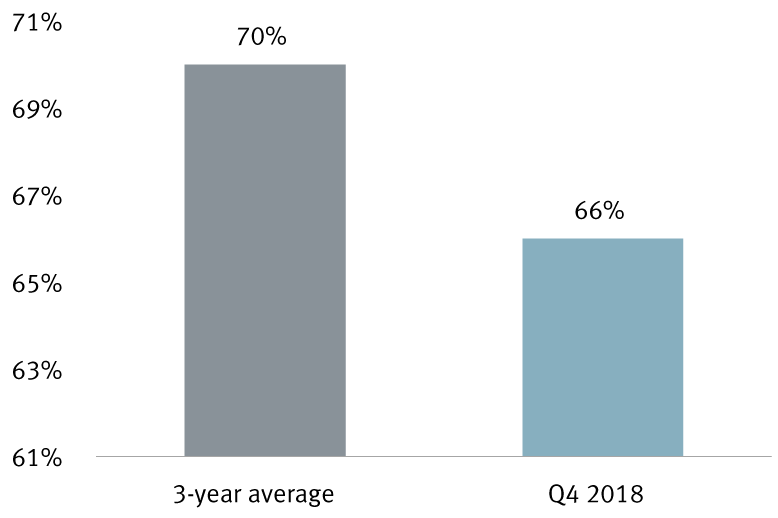 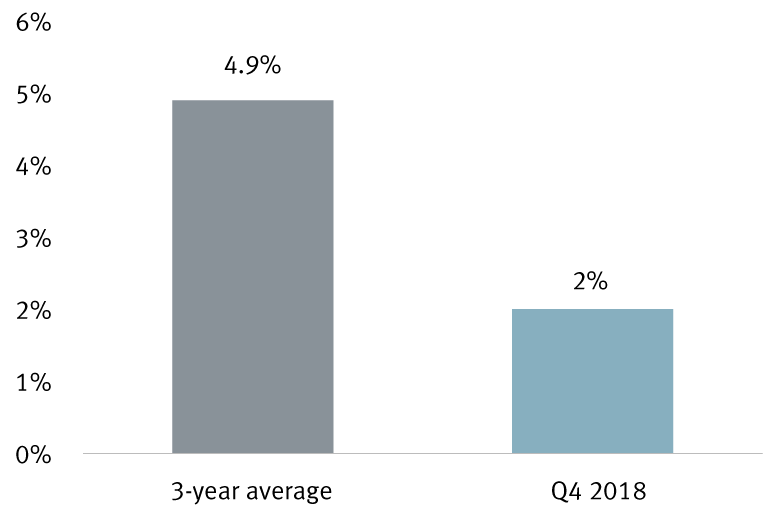 Thus far, fewer companies have exceeded estimates than in the past, and the beats have been smaller.

In addition to Q4 trends, challenging prior-year comparisons and important economic trends point to slowing earnings growth in 2019, in our view.

The corporate tax cuts, which represented a roughly 7–8 percentage point boost to the bottom line in 2018, will drop out of the 2019 data. Even though companies will still realize the benefits of low taxes, they will no longer be a factor in the year-over-year growth calculation.

Also, robust 2018 growth of 20 percent+ pushed earnings up to an elevated level that will be difficult to exceed by any meaningful degree, in our view.

Year-over-year arithmetic aside, pockets of weakness in the domestic and global economies, including overall slower rates of growth, are factors. 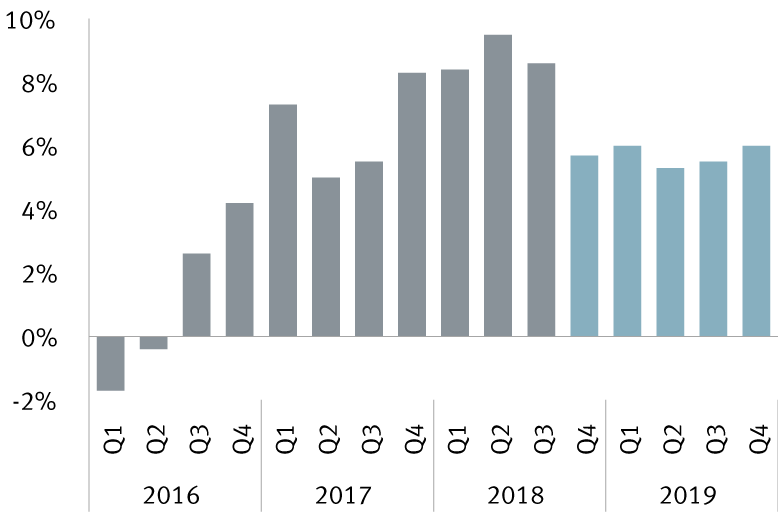 Despite the headwinds, revenue growth estimates (in blue) are at respectable levels.

U.S. housing, for example, has been soft for months and took another step backward in December when sales of previously owned homes fell 10 percent y/y and transactions retreated to the lowest level in three years. Auto sales have fallen too. Domestic manufacturing activity and new orders—a key leading indicator—declined notably in December, and capital spending intentions have softened lately. Business sentiment has pulled back, albeit from a very high level, in the U.S. and other major economies.

RBC Global Asset Management has trimmed its 2019 U.S. GDP growth forecast from 2.50 percent to 2.25 percent, further below its 2.9 percent estimate for last year. GDP should be supported by ongoing, positive consumer trends. By no means would an economy expanding around the 2.25 percent level be troubling, but it would be below the average of previous expansion cycles.

Global growth will likely be softer this year too. Europe’s largest economies—Germany, the U.K., France, Italy—are in the midst of a malaise for a variety of reasons. China faces ongoing challenges from slower economic momentum, debt constraints, and U.S. tariffs. An executive of FedEx, one of the most economically sensitive, globally oriented U.S. companies, put it best on an earnings conference call recently, “The peak for global economic growth now appears to be behind us.”

S&P 500 companies with overseas revenues are much more tied to Europe than China or broader Asia, but slowing in these two large economic regions tends to dampen overall corporate prospects.

The earnings outlook is murkier than it was a year ago. While recent estimate cuts have likely been factored into stock prices, economic uncertainty and policy risks related to trade/tariffs, the Fed, and the complex political backdrop in Washington leave room for surprises in 2019.

As long as modest U.S. GDP growth of two percent two percent or so remains feasible and Europe and China stay near their current subdued trends without much more slippage, we believe the S&P 500 can eke out mid-single-digit earnings growth in 2019. Reasonable valuation levels of 16.5x trailing earnings and 15.9x the forward $170 consensus forecast, which is slightly below RBC Capital Markets’ estimate, provide an appealing, albeit less exciting, investment environment. We believe it supports a Market Weight position in both U.S. equities and total equity exposure in portfolios.

Our long-standing view remains that investors should give equities the benefit of the doubt as long as the economic, credit, and earnings cycles are favorable for stocks. Five of our six favorite forward-looking U.S. recession indicators are signaling the expansion will persist for at least the next 12 months or so. The other indicator is in neutral territory. None are signaling an imminent recession.

Given the U.S. economic cycle looks increasingly to be in its late stages, a higher level of investor vigilance is warranted.

Investment outlook for your 2021 portfolio

As the economic fallout from COVID-19 is absorbed, ultralow rates should make equities the asset class of choice and fixed income more challenging.