As investors temper their optimism with caution, we look at monetary policy and what central banks could do to prolong the economic expansion.

The global economic expansion is marking its tenth birthday, yet celebrations have been dampened by some uninvited guests: ongoing U.S.-China trade tensions and disappointing economic data. Investors are growing apprehensive about a potential hangover, with financial markets anticipating the need for policy stimulus across advanced economies to keep the party going.

Major central banks have given investor enthusiasm a boost by signaling willingness to reach into their toolkits to sustain the expansion. The Fed and European Central Bank (ECB) have voiced their intention to keep the music playing, and markets anticipate that central banks in Japan, Canada, and other countries will follow suit. But with advanced economies still awash in accommodative conditions, pulling policy levers to prolong the cycle may not be as effective as in the past. 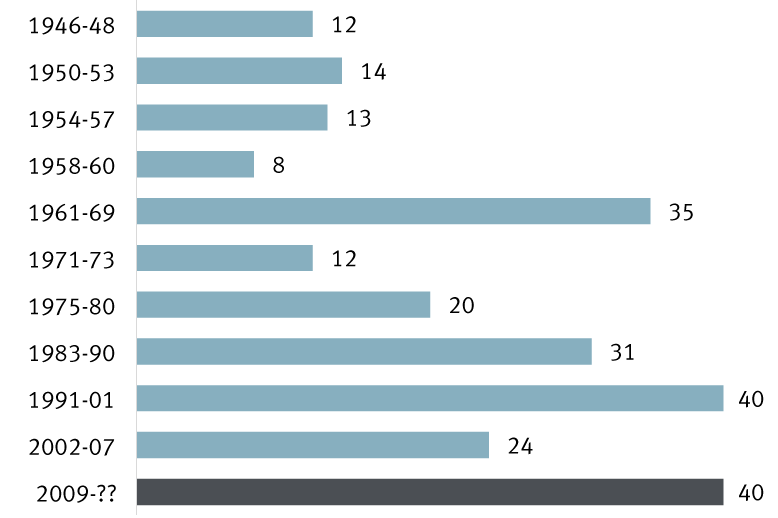 The U.S. economic cycle is on track to become the longest on record, spanning ten years that saw central banks take extraordinary policy measures to stimulate growth in the aftermath of the global financial crisis. The balance sheets of major central banks have ballooned nearly five-fold over this period, while policy rates remain near historically low levels.

The amount of policy influence expended raises questions of how much more policymakers can do. The International Monetary Fund (IMF) has warned that there is limited policy space to counter a downturn should trade tensions escalate or a slowdown in global growth intensify.

Why? First, the impact of negative interest rates. Negative rates are meant to incentivize investors to seek higher returns in riskier assets, and to spur economic activity through borrowing. But against a backdrop of economic growth concerns and central bank caution, investors are increasingly doing the opposite and paying for the safety of government debt, pushing some yields deeper into negative territory. This is evident in the robust appetite across Europe and Japan for bonds with negative yields: the amount of negative-yielding debt has increased more than 20% year-to-date, climbing beyond $10T and approaching 2016 highs.

Second, the line connecting historically low rates and real economic activity appears blurry. In many advanced economies, low policy rates have shown limited capacity to spur economic growth, boost wages, and drive inflation higher. For example, the ECB has maintained a negative policy rate since 2014 but price pressures remain subdued and the growth recovery has stalled. Thus, the capacity for even lower rates to boost the economic expansion, at the margin, appears limited—especially in Europe.

Finally, financial markets are showing skepticism of central banks’ ability to meet their mandates as inflation expectations slip lower across advanced economies. With policy rates exceptionally low, declining price growth expectations are, in turn, pushing up real yields. This implies a higher cost of borrowing, which could curb appetite for investment. Central banks may need to cut policy rates further just to offset the attendant tightening in financial conditions before they can expect any feed-through to growth.

Financial markets are increasingly anticipating the start of a synchronized cycle of policy easing by major central banks, with Australia and New Zealand having already cut. We believe there is scope for late-cycle monetary stimulus to provide some support, but note that markets are pricing in aggressive rate cuts, while major central banks will be wary of acting prematurely.

Government spending to the rescue?

Given the potential limits on the effectiveness of further monetary stimulus, fuel for the engines of economic growth also may need to come from somewhere other than central banks should conditions deteriorate.

Government spending is blowing wind into the sails of advanced economies in 2019, a trend that appears set to reverse when the boost from U.S. fiscal stimulus fades in 2020. But advanced economies have not yet fully restored their fiscal positions after deficit spending during the global financial crisis. Persistent deficits and elevated debt loads compared to a decade ago point to a limited capacity for fiscal policy to prolong the expansion, in our view.

The addition of elevated global policy uncertainty, largely coming from hardline rhetoric on the trade front, could further limit governments’ capacity to prop up growth. Cautious businesses and consumers could be hesitant to respond to stimulus measures, dampening the effect of expansionary fiscal policy.

The Fed can call the tune

We believe the expressed willingness of central banks to pursue a path of easing policy if conditions warrant suggests that the economic expansion has more room to run, even if the banks’ capacity to boost global growth is limited. Crucially, though, the Fed is likely to play a leading role as it has the greatest scope to act among G10 central banks.

Comparing the U.S. policy rate to those of the rest of G10 central banks 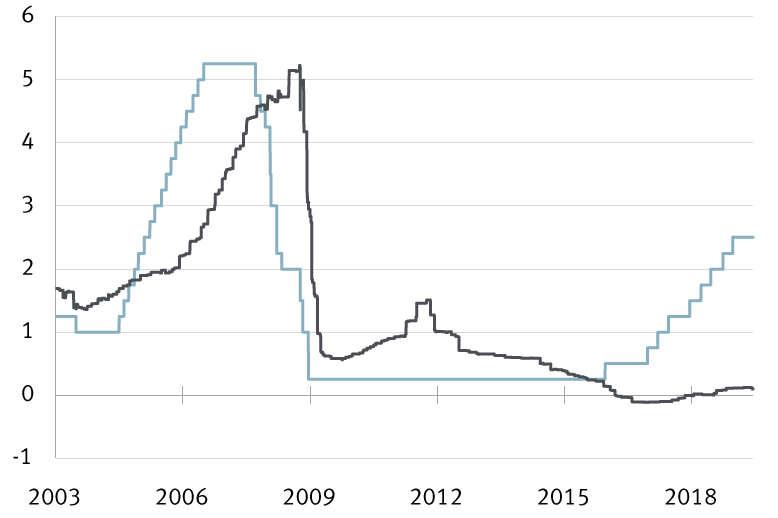 Recent comments from key Fed policymakers suggest the central bank will monitor ongoing trade risks and the evolution of economic data to gauge the need for rate cuts, and will act if conditions warrant. The Federal Open Market Committee meeting on June 18 and 19 will be pivotal in setting the tone for policy expectations going forward.

Our fixed income strategists believe two rate cuts are likely in the second half of the year, with perhaps one more in early 2020 if needed. Unless conditions deteriorate significantly, they think the Fed will be hesitant to cut rates further ahead of the presidential election.

The limited capacity of central banks and governments to stoke growth in response to a downturn is reason for vigilance, but does not portend an imminent end to the near-record economic expansion, in our view. Although economic growth has slowed and downside risks are present, prudent policy—led by the Fed and followed by other major central banks—could keep the equity bull market dancing for another song before it’s time to go.