The Fed delivered the rate cut that was long awaited, but it may not have been enough and raises risks the Fed could fall behind the economic curve.

If you had looked only at the market gyrations of July 31, you might have thought the Fed actually raised rates following its latest meeting. Major U.S. stock indexes fell by more than 1%, near-term Treasury yields spiked—driving yield curves both flatter and more inverted—and the dollar rallied to a two-year high. And yet, the Fed actually moved to cut interest rates for the first time in more than 10 years.

Of course, markets had been anticipating this rate cut since May, so perhaps it could simply be written off as a classic case of the old adage “buy the rumor, sell the news.” But while the rate cut, paired with the Fed’s statement that indicated it will “continue to monitor the implications of incoming information for the economic outlook and will act as appropriate to sustain the expansion,” delivered what the market wanted, and expected, it was once again Fed Chair Jerome Powell’s own words that fueled concerns that the Fed may be closer to making a policy error than it is to acting “as appropriate.”

By this point, it is well documented that Powell has struggled to deliver the Fed’s message during his press conferences, appearances that have largely been interpreted by markets as being on the hawkish side. As the chart shows, the S&P 500 has finished down on the day following most press conferences since his tenure began at the start of 2018. 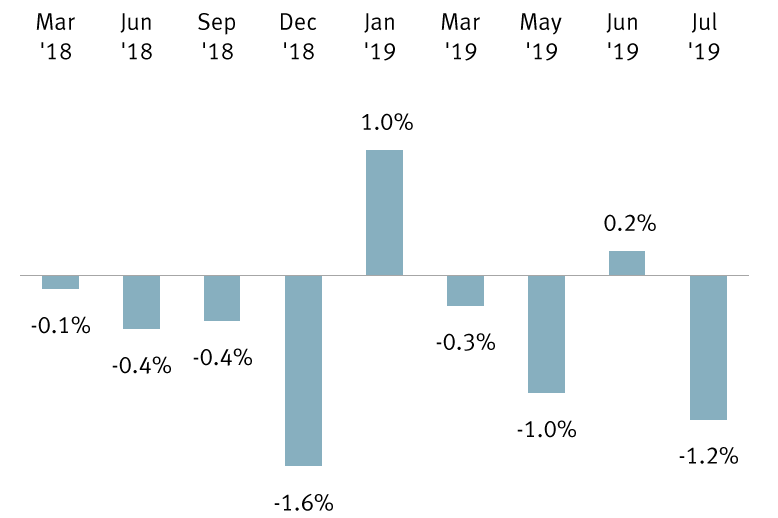 Following the July 31 decision to cut rates, Powell again fumbled his way through the Q&A session in not only justifying the rate cut, but also in providing clear guidance as to what investors and markets might expect going forward. Markets focused on his “mid-cycle adjustment” comment as meaning that this rate cut was likely a “one-and-done” move, rather than the first in what may be a series of easing adjustments. He then had to walk that back by stating that the Fed is open to further rate cuts this year.

To be sure, the Fed is between a rock and a hard place, facing pressure from markets and the White House, while trying to maintain its independence. But all of that is just noise, in our view, as the case for cutting rates—as always—is based on the fundamentals.

Forget the headlines, the case for rate cuts remains a fundamental one

In the run-up to the Fed’s move to cut rates at the July 31 meeting, much of the narrative was centered on the idea that the markets—and commentary out of the White House—were forcing the Fed’s hand. While U.S. labor markets and consumer spending remain solid, we have seen historically sharp decelerations in a wide swath of economic data in the U.S. and, especially, globally.

The August 1 release of the Institute of Supply Management’s (ISM) Purchasing Managers’ Index (PMI)—a measure of manufacturing sentiment that is somewhat correlated with economic growth—showed a further deterioration to 51.2, the lowest print since 2016. It is now hanging precariously above the key level of 50 that separates expansion from contraction in manufacturing, and has yet to show any signs of stabilizing since last year. A similar index of global manufacturing is currently below 50, and has been since May, a sign of ongoing contraction in global activity.

But Treasury yield curves remain our focus. As the chart shows, the 10-year Treasury yield—still a barometer of growth and inflation expectations—is highly correlated with the ISM PMI. On the back of the latest decline, and on the Fed’s hawkishness which is neither positive for growth nor inflation, the 10-year is back below 2% and at the lowest level since November 2016. With the Fed only cutting short-term rates to a range of 2.00%–2.25%, that means that many yield curves remain inverted, a signal that monetary policy is still too restrictive, and that recession risks remain somewhat elevated, at least by this measure. 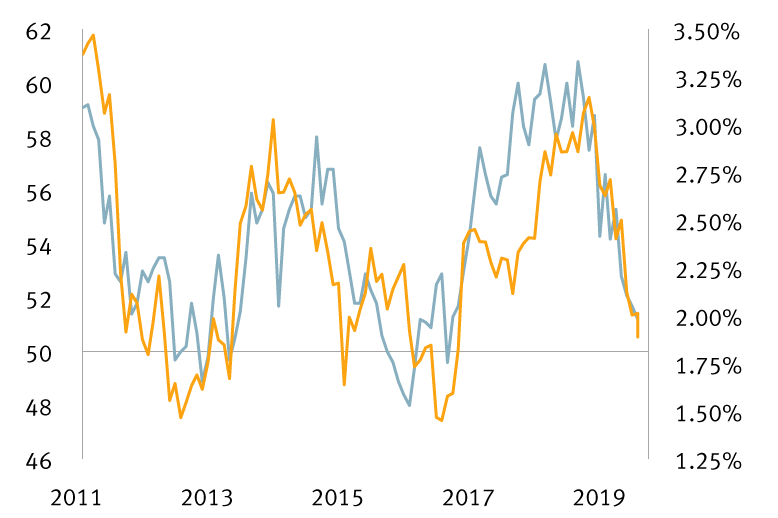 We have been clear that we think the Fed should be aggressive in adjusting policy ahead of potential economic weakness and uncertainty, as the risks of falling behind the curve appear greater to us. And this view is only emboldened following President Trump’s tweet that he would institute a 10% tariff on the remaining $300B of imports from China, to potentially begin on September 1.

But here too, with respect to trade war fears, we believe Powell missed the mark during his press conference, failing to inspire confidence that the Fed has a plan to react preemptively to escalating global concerns. Powell said, “The thing is, there is not a lot of experience in responding to global trade tensions. So it is something that we have not faced before and that we are learning by doing.”

The perception that the world’s de facto central bank is flying by the seat of its pants may only serve to raise uncertainty further.

Will the Fed have to play catch-up?

Our view remains that the Fed will cut rates by a total of 0.75% by the end of the year, bringing short-term rates to a range of 1.50%–1.75%. However, our primary concern remains that should the Fed move gradually in cutting rates, as it did in raising rates, the risk is heightened that it will have to eventually cut rates faster and by a greater degree than it otherwise would have.