The UK’s vaccination programme has been a success, both in terms of procurement, with the government establishing an industry-led vaccine manufacturing taskforce early on in the pandemic, and its rollout. With 51 percent of the population now having received at least a first dose, plans to lift all restrictions on the economy on June 21 are on track.

And along with all that, the recent economic news has been very encouraging, suggesting that the hit to the economy from the lockdown has been less than feared, and that activity has already started bouncing back in anticipation of the reopening.

Underpinned by a large savings pool, with households having accumulated more than £150 billion in additional savings versus 2019—equivalent to some eight percent of GDP—retail sales excluding automotive fuel rose by a robust 4.9 percent in March compared to the previous month, and this after a 2.5 percent gain in February. RBC Global Asset Management Inc. Chief Economist Eric Lascelles points out that the IHS Markit/CIPS Flash UK Manufacturing Purchasing Managers’ Index reached a multi-decade high of 60.7 in April while the flash services reading surged to 60.1. Only three months ago the latter had languished at 39.5. The services component has thus accelerated from a level consistent with a deep recession to one associated with rapid growth in short order.

This turnaround makes sense, in Lascelles’ view, given the prospect of the reopening after a long period of stringent restrictions, the early success of the vaccination programme, and by virtue of significant economic underperformance both last year and in early 2021 that gives the UK economy plenty of room to play catch-up. Aggressive fiscal support since last year—amounting to a full 14 percent of GDP—also helped. The consensus GDP forecast for 2021 has increased from 4.5 percent in early February to 5.5 percent today. Next year should see more strong growth as the post-pandemic rebound continues, with RBC Capital Markets penciling in a robust 5.8 percent increase in 2022.

A number of risks are worth watching, however, as they could impact prospects beyond the current growth surge. COVID developments are key, of course, but the further souring of the UK-EU relationship and that with Scotland are risks worth monitoring. Finally, a premature return to fiscal orthodoxy could also restrain growth.

Post-Brexit trade frictions have not been assuaged, and the UK’s economic performance would have been even stronger had exports not been restrained by the new rules now governing UK and EU trade.

After plummeting by 42 percent in January, UK exports to the EU recovered in February though they remain much below the level when the UK was a member of the single market. This is not surprising as just under half of UK-based exporters had problems with post-Brexit trade rules and have either been tangled up in more red tape or endured higher costs, according to the British Chambers of Commerce. Meanwhile, exports to other countries have not picked up enough to offset the shortfall. 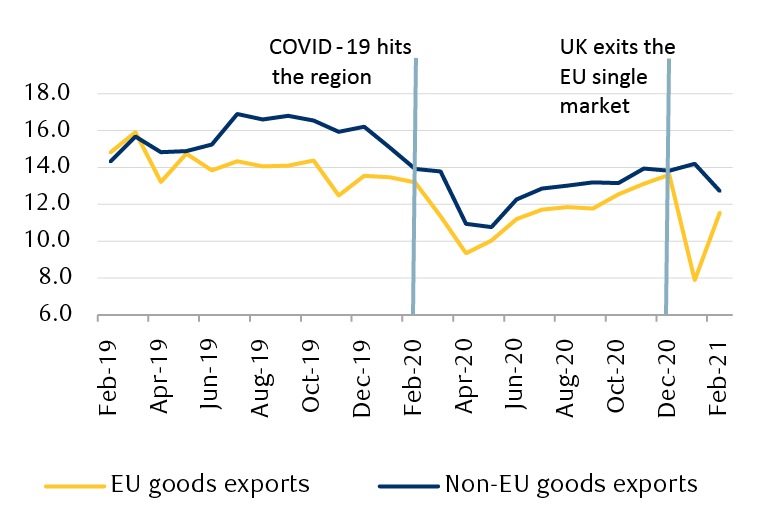 Trade with the EU may well remain below historical levels for a long time unless these issues are tackled. Realigning Britain’s food and agriculture standards with those of the EU, for instance, would help revive food and farm animal exports, which have been hurt the most, falling by more than 60 percent on a year-over-year basis in January. But the souring of UK and EU relations makes such a realignment difficult and could lead the EU to take a hardline approach to giving UK financial services firms access to its market.

The UK’s relations with Scotland are also being tested. The Scottish nationalist movement has gained momentum since the UK voted to leave the EU. Scotland voted overwhelmingly to remain in the EU in the June 2016 Brexit referendum. Scottish farming and fishing industries in particular have been deeply scarred by the new trading rules negotiated by Prime Minister Boris Johnson.

The Scottish parliamentary elections on May 6 look likely to yield a majority of pro-independence parties. A decisive victory would raise the prospect of Scotland, which contributes eight percent of the UK’s GDP, breaking away from the UK with the aim of trying to join the EU as an independent country. There are many hurdles to this occurring, least of them Johnson granting the Scots a referendum and the Scottish nationalists winning it. But the uncertainty regarding this potential sequence of events could rekindle financial markets’ concerns about the UK’s post-Brexit future.

The government’s intention to start to balance the books in two years’ time by raising corporate taxes will be an additional burden for UK corporations. Yet a more lenient approach to regulation and competition could offset this somewhat. The government’s future attitude towards these issues in a post-Brexit world is a key factor to watch.

We remain constructive on UK equities and would hold a Market Weight position. Over the past five years, due to the uncertainty following the Brexit referendum, UK equities endured severe outflows, which haven’t yet been meaningfully reversed. The growing number of recent bids for UK-listed companies across a range of sectors over the past year highlights that global corporates and private equity are finding attractively valued assets in the UK, though the reappraisal of the UK equity market may take time.

In our opinion, UK equities still trade at attractive valuation levels in both absolute and relative terms. For instance, the MSCI United Kingdom Index trades at the widest discount to the MSCI World Index on a price-to-earnings basis in more than 20 years. Moreover, UK equities deliver the highest dividend yield globally at almost 3.5 percent.

The Materials and Financials sectors will likely be key beneficiaries of an economic recovery, while consumer-focused domestic stocks should be underpinned by the release of pent-up demand meeting high levels of consumer savings. We would maintain exposure to quality UK companies that possess an international footprint and trade at an unduly large discount to overseas-listed peers.